The heart knows—and your phone is telling you

Go or stay? Buy or wait? You can follow your heart, but now a cure for indecision is just an app away. 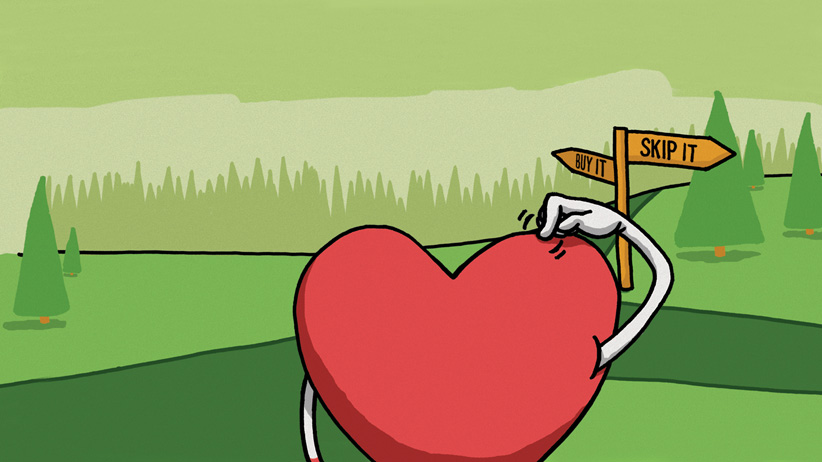 Maureen Pelton, a 51-year-old psychotherapist from San Francisco, struggles with decision-making: “I have a strong intuition, which I try to trust, but sometimes big decisions leave my head spinning.” Last fall, Pelton—a board member on the feminist Miss Representation project—was invited to a three-day women’s retreat. The event was convenient to get to, and right up her alley, but, for reasons Pelton couldn’t articulate, she hesitated. “I’m thinking, ‘No, I don’t wanna go, but why not go?’ I couldn’t make up my mind.”

Pelton turned to Choice Compass, a new decision-making app, to relieve her indecision. She placed her index finger over her smartphone’s camera lens—a built-in heart sensor is a little-known feature already included on the latest models of most iPhones and Androids—and followed the instructions on her screen. “Breathe deeply as you focus on the choice. Mind wandering is okay!” they read. For 50 seconds, Compass measured Pelton’s heart-rate variability, or HRV, to tap her “body’s natural wisdom.”

Choice Compass is one in a cohort of new decision-making apps, such as ChoiceMap, a free iOS app that allows you to create criteria for rating choices, and Android’s Decision Buddy, which aids in group decisions, such as choosing a movie. Others like Coin Flip and Roundom offer a a totally randomized answer. Beta tests for Choice Compass showed users were skeptical of their phone’s ability to pick up heart rhythms—and that its findings could reflect their heart’s desire. “Some people thought it was ridiculous,” admits the app’s creator, Julia Mossbridge, a neuroscientist at Chicago’s Northwestern University. It’s a reaction she understands: “You’re literally listening to your heart,” she laughs. “I get it.”

But Mossbridge says the science behind the app is solid. For two decades, studies have linked emotional state and heart-rate variability, starting with a 1995 paper in the American Journal of Cardiology by researchers at HeartMath, a non-profit research organization south of Silicon Valley. “We were researching heart-rate variability before it was even called that,” says Deborah Rozman, president and co-CEO. “If you’re angry, anxious or depressed, your HRV is disordered and jagged, like an earthquake. It’s going to look like you feel,” while the HRV of a person feeling love or gratitude is “beautiful and smooth like a sine wave.” Those in this state of “heart-rhythm coherence” see the big picture, exhibit more empathy and, yes, make better choices.

Related reading: Data from wearables could be used as evidence—for or against you

Mossbridge believes science can be marshalled to aid in decision-making itself. “It seemed to me that if you had some kind of reading of your emotional state while you were deciding, you’d have a short-circuit to your body’s wisdom,” she says. Her app’s users perform two 50-second HRV measurements for either side of a decision (say, applying for a new job versus asking for a raise) to identify the right subconscious choice—even if it’s the more stressful one. “Sometimes the best choices are exciting and maybe scary, too,” says Mossbridge, whose algorithm takes takes nerves into account. The math is also personalized to the user’s age and gender.

The question for Rozman is whether a smartphone can capture an accurate enough heart-rate reading. Professional devices used in HeartMath’s labs, like Holter monitors, have 100 times the measurement capability of most smartphones. But the gap is closing, and Samsung has licensed HeartMath’s database of HRV norms for use with the upcoming Galaxy, which includes a far more sensitive heart sensor for any number of HRV-based apps. (There are others, including HeartMath’s own Inner Balance and GPS for the Soul.)

Outsourcing choice to your phone may feel like a Ray Bradbury story, but for people like Pelton, the idea’s utility eclipses any weirdness. When Choice Compass suggested she skip the retreat, Pelton did. She went instead to another event, where she ended up at brunch with Alice Walker and Gloria Steinem, who invited her to spend the weekend with them. Pelton is grateful to Choice Compass, but takes some personal credit, too. “I didn’t know, but some part of me knew,” she says.