So what if the new iPad comes in white? It's still boring. 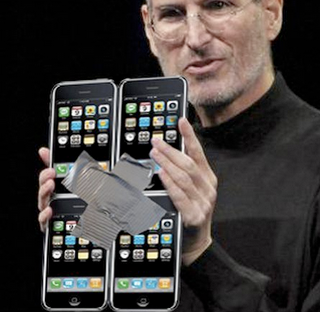 Now this I would have lined up for.

Apple sold 15 million iPads in nine months. But so what? The gadget is a dud.

It has done none of these things. After the cool factor wore off, iPad owners were left with a nice way to surf the web on a couch. Compare it to the iPhone, a truly transformational device that owners interact with hundreds of times a day. My dad (not exactly a luddite, but close) got one as a gift, and within a week he couldn’t remember how he had lived without it. He now has a dorky little holster for it on his belt. It’s adorable. My mom followed up by buying him an iPad. He played with it for a day or two and hasn’t used it since. The iPhone is a crucial tool, the iPad a toy. Boys get bored with their toys.

Now we’re supposed to get excited all over again because the toy comes in white. Yes, it’s also a bit thinner and a bit faster. Guess what? Computers will always get smaller and faster. The problem with the original iPad wasn’t that it was too slow or too big. It’s that it was a solution in search of a problem. It didn’t let me do anything I couldn’t do before.

Perhaps this will change. As more and more people acquire iPads and other tablets (especially those that run on open platforms), new uses for them will emerge. New apps will be developed, and eventually someone will come up with something awesome that we will want to do all the time and that can only be done with a tablet. But when that happens, it will be despite Steve Jobs, not because of him.

Apple has steadily devolved from a maker of beautiful machines for creators to a censorious manufacturer of shiny doodads you can’t easily type on or share files with. Whereas once they led by innovating, they now aim to stay on top by using their market clout to bully others from doing so—see yesterday’s post by Chris Sorensen on Apple’s attempt to monopolize the touchscreen market.