The one story that could save your life—well, maybe not 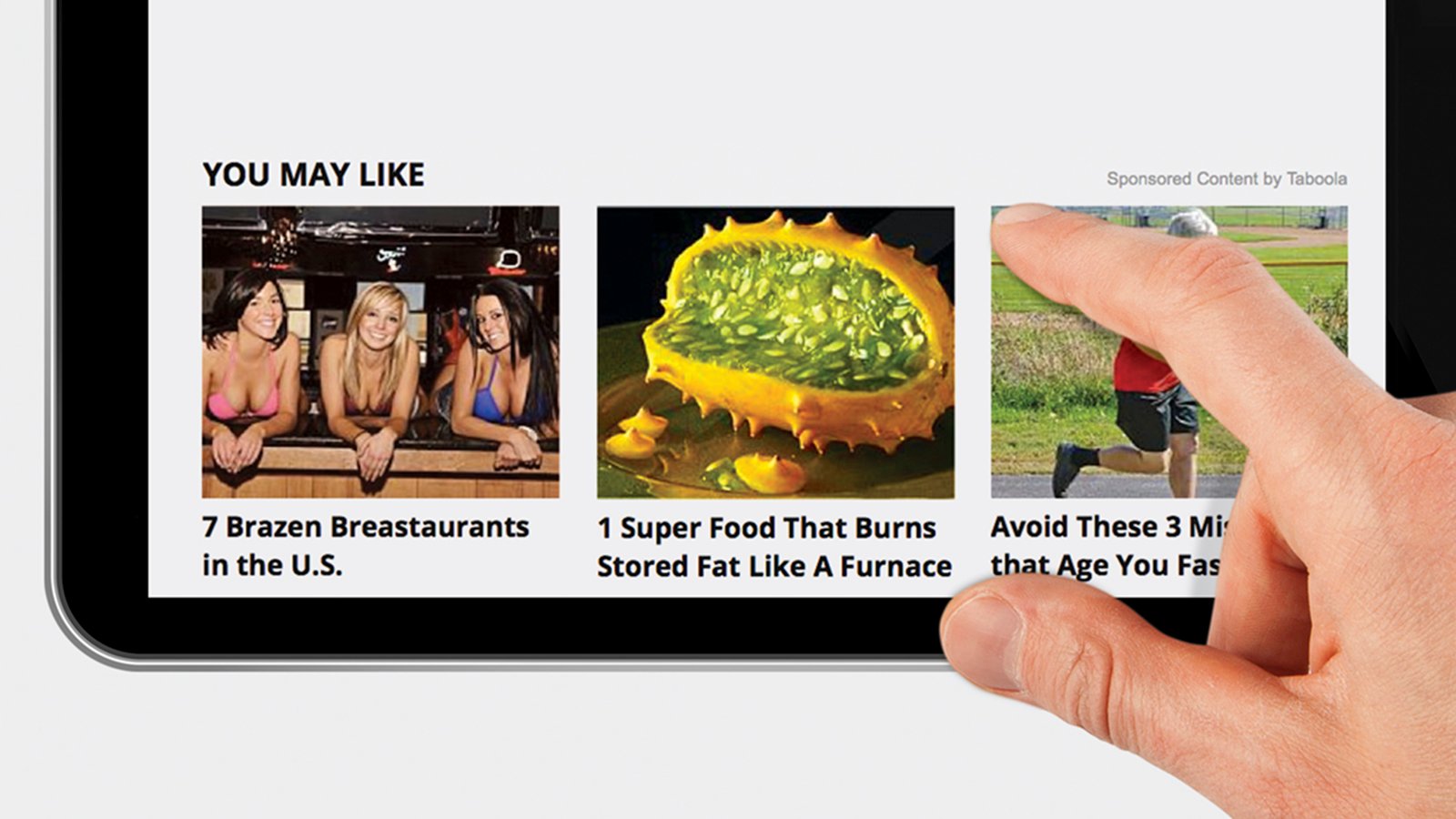 Whether you’re a reader of Time, CNN and ESPN, or thousands of other, smaller online publications, you’ve encountered a widget under a story pointing to other “content you may like.” With their sensationalist headlines—“15 celebs with physical deformities,” “9 people you won’t believe actually exist,” “Biggest, fastest weight loss”—and cheap thumbnail art, the links are crass, shameless and usually ugly. Yet there’s a million-dollar business behind this editorial snake oil—and, unless the online publishing industry turns on its head, it’s going to make the Internet uglier.

Taboola, Disqus and Outbrain are the leaders in the “content monetization” game. Taboola makes 150 billion “content suggestions” each month, while Outbrain is installed on more than 100,000 websites and blogs. It’s a simple system: Advertisers and sites pay a firm like Taboola to link to their content; Taboola then pays a publication like the Daily Telegraph or Politico to reserve a chunk of online real estate to host the links. (They do not appear on Macleans.ca.) It seems a harmless revenue tool for publications in dire need of one. “For many publishers, we’re their largest single source of revenue, more than any direct advertiser,” says Ira Silberstein, a VP at Taboola. Yet the “suggested content” is not only frequently off-brand—does a reader of The Atlantic really want to know that “Kendall and Kylie Jenner broke Instagram again”?—but also counter to a publication’s main goal: to get readers to stay on its site for as long as possible, rather than be catapulted to AhFunny or LifeGooRoo, content farms rife with phony news and diet-pill scams.

It’s the evolution of spam, but one generated by mainstream brands. “I’ve been served up wild and racy content on sites that are neither,” says Jay Baer, a digital marketing consultant. “Publishers would never blindly insert a banner ad at the top of their site, but with these ‘below-the-fold’ links, they often have no idea what’s going in there and just hope it’s OK.” It rarely is. While Silberstein says Taboola spends a “crazy amount of time” ensuring publishers are aware of what links show up, each reader encounters something different every visit, thanks to algorithms that analyze a user’s web history, and the results are more often tabloid than not.

“We’ve got the tools to do this stuff much better,” says Ryan Singel, a former editor of Wired who founded Contextly, an “audience-builder” that, instead of directing readers to sketchy external sites, recommends stories native to a publication, in the hopes of increasing dwell time. “There are smart ways of showing off your best content that’s going to help a site in the long run.”

In a perverse way, the links are a by-product of the mainstream media’s own breathless race for hits. Content-engine headlines are only slightly more dramatic than those found on such sites as Upworthy (“It’s not just the bikini bodies in magazine ads that are fake”) and USA Today (“Why no arms is no problem for this mother-son duo”). In either a fit of meta-irony or plain old desperation, even The Onion hosts Taboola content promoting miracle fruit and wonder carbs.

Still, there is hope. Taboola was recently urged by the National Advertising Division to tweak its labelling to ensure readers know where a link will take them, while Outbrain last year dropped a host of its clients, including Newsmax, a source of hard-right click-bait, over the quality of their content. “I’m not saying that everything in our network is Pulitzer Prize-winning content,” says Lisa LaCour, a VP for Outbrain. “But it’s true, authentic and trustworthy—and if it’s not, let us know and we’ll kick it out.”

Ultimately, though, readers only have themselves to blame. “We produce algorithms that will drive clicks and, lo and behold, the stuff that gets clicks is salacious material,” says Neil Mody, CEO of content-engine nRelate, which operates on such sites as the Daily Beast and gives publishers direct power to oversee which links show up on their sites. “Kim Kardashian’s cleavage shouldn’t be promoted in an article about the Ukraine crisis, but it’s there because readers are clicking on it.” The problem may be too large for even a super-food to save.