Canadian cops claim they need new “lawful access” laws to deal with online crime. But the case of Dennis “David Mabus” Markuze shows that when it comes to the Internet, our police are reluctant to use the powers they already have.

Markuze has allegedly been spamming atheists and scientists with online abuse and death threats for over 15 years. Here’s one example among thousands:

Lots of people say lots of offensive—even illegal—things online, but Markuze lent his comments a chilling credibility when he showed up in person to an atheist event in Montreal in October 2010. One attendee snapped this now infamous picture: 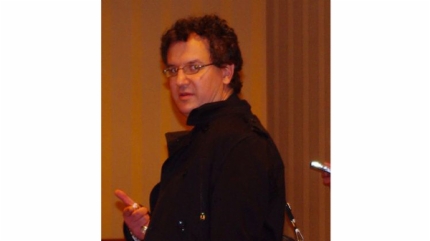 Markuze’s many accusers filed complaint after complaint with both the Montreal police and the RCMP, citing emails and tweets Markuze sent that represented credible threats to their safety. But our cops ignored them. Undaunted, these online sleuths worked together to build an extensive case that linked “Mabus” to Markuze. They pieced together his identity, his address, his tactics, and they compiled his many alleged offenses. All of this information was presented to the police, and all of it was ignored (for a detailed account of the process, read Tim Farley’s extensive blog post).

Only when Markuze’s accusers began their own spam campaign, targeting the Montreal police, did they get results. An online petition titled “Montreal Police: Take “Mabus” death threats seriously” was engineered to send the Montreal cops an email each time it was signed. It was signed over 5000 times. The sheer annoyance factor, in combination with growing media attention, finally elicited a reaction. Dennis Markuze now faces 16 counts of uttering death threats. More will surely come.

As Markuze is brought to justice, questions linger. Why did our cops ignore this case for so long? Was it because the (initial) accusers were not Canadian? Or was it because the alleged crimes took place on the Internet, and therefore were not taken as seriously as if they had been yelled on the street, mailed through Canada Post, or whispered over the phone?

And finally, how can we take police seriously in their demands for new powers to link online avatars to their real world identities without court oversight, when they ignore international cyber criminals whose identities are matters of public knowledge?