The trouble with city bats

Bats are flocking to urban areas 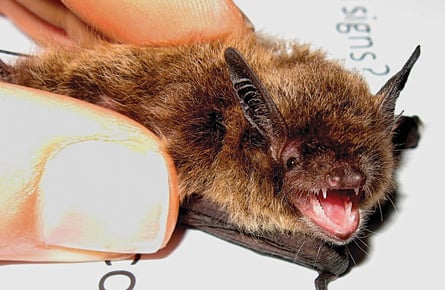 In flat and treeless Alberta, little brown bats flock to the big city—Calgary—where tall buildings and bridges provide ample space to roost, says Joanna Coleman, who recently completed her Ph.D. in biological sciences at the University of Calgary. But that doesn’t necessarily mean city bats are in good health, in spite of Coleman’s expectation that, if urbanization were to benefit bats anywhere, it would be in the Prairies. In a new study—the first to look at the urban life of Prairie bats—she actually found that city life might not benefit bats after all.

Coleman looked at 1,600 little brown bats, working in three different zones in and around Calgary: urban, rural, and a “transition zone.” Bats were captured in fine nets, weighed, measured—in the case of females, researchers checked whether the bat was lactating—and then released. “I was very uncomfortable with them at first,” says Coleman. In her previous work as a veterinary technician, “I’d handled all kinds of critters, but bats are very fragile,” she says. Up close, she adds, they’re also “extremely cute.”

Coleman caught the most bats in the city, but found these bats weren’t actually healthier than their country counterparts (those in the “transition zone,” she says, appeared to be in the best shape). Why bats don’t flourish in the city isn’t clear, but it could be because they’re facing more competition for food, or even urban annoyances like street lights. Even so, “I wouldn’t necessarily try to improve the urban habitat for bats,” she says, “until we understand why the city isn’t so great for them.” Now teaching biology at the University of Calgary’s campus in Doha, Qatar, Coleman admits she’s been scouring the desert city for any sign of bats—with no luck. “I walk around with my head up.”