Scott Feschuk is bemused about the future of driving: So we get all the responsibility of driving, and none of the fun? 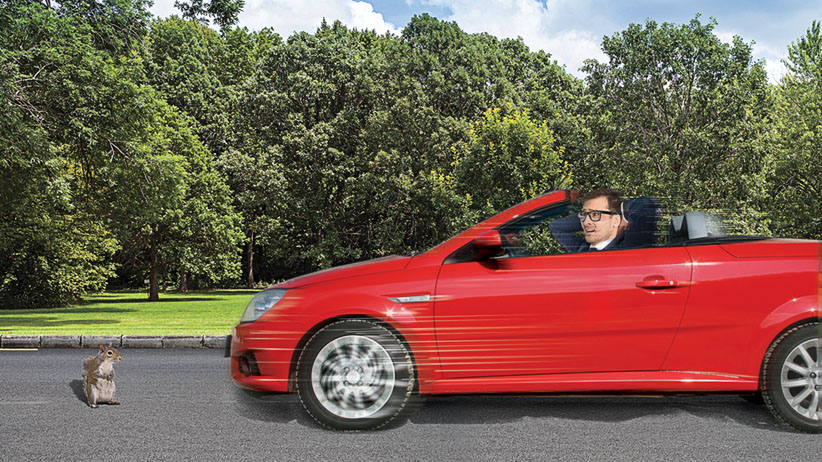 Are you psyched for the dawn of the autonomous car? I sure am. Who among us doesn’t share the dream of climbing into our vehicle, stretching out in the back seat, and letting technology handle the arduous chore of getting flipped off by cyclists?

Alas, there’s one teeny-tiny problem with the futuristic self-driving cars of tomorrow: We’ll still have to drive them.

Audi, Nissan, Volvo and the rest—they’ve all talked about putting “self-driving cars” on the road within the next five years. But that’s not what they really mean. The cars of 2020 will include high-tech features, but drivers will still need to watch the road and be ready to take the wheel at a split-second’s notice. We were expecting these machines to have the smarts of Jarvis in Iron Man. Turns out, they’re going to be about as autonomous as a blender on Iron Chef.

Bottom line: We will still bear all the responsibility of driving—without experiencing any of the fun. Drivers will putter around in cars that adhere precisely to the speed limit and accelerate from 0 to 100 in just a tick under “eventually.” But when a squirrel sprints across the road, the Artificial Intelligence will freak out, set off 84 warning dings and basically go, “YOU DEAL WITH THIS ONE, MEAT SACK!” Sounds super-relaxing. Thanks, technology.

So what’s the holdup? Turns out, autonomous-car technology is suffering from a bad case of the close-buts. As in: We’re close to having cars that drive themselves, buuuut . . .

Most “buts” are tech-based: ensuring the accuracy of GPS maps, teaching the AI how to adapt to severe weather, rewriting all of Bruce Springsteen’s car songs to include a sexy algorithm at the wheel.

There are also ethical and legal hurdles. Some predict outrage and backlash the first time a computer makes a driving decision that, in the words of a BMW executive, “may not be acceptable from a cultural or societal point of view”—such as injuring the driver as part of an attempt to avoid a dog, or taking a family to Arby’s.

Meanwhile, lawyers can’t wait to get paid by the hour to argue who’s liable for accidents involving self-driving vehicles. Is it the “driver” of the robo-car? Is it the manufacturer? The software developer? These are questions with no easy answers. We are, at most, a decade away from the prime-time debut of Law & Order: SUV.

For the record, I believe lawmakers should move pre-emptively to ensure that no humans are enriched by this new legal field. Instead, such cases should be argued exclusively by autonomous robot lawyers.

Despite the hype, there’s a downside to be found in even the most promising of self-driving experiments. Take the Google car, a vehicle that places the engine power of up to five hamsters within the rugged, masculine contours of a gumdrop. Word has it that Google’s autonomous(ish) car may ultimately be equipped with memory-foam airbags along the exterior—presumably, to ensure that any collision with a pedestrian is as safe and restful as possible. It’s going to take forever to get to work if you have to keep tucking people in.

Some highly touted advances don’t even sound that exciting. Mercedes-Benz is promoting a lane-keeping feature that makes it possible for drivers to take their hands off the wheel for long stretches at a time. But I already do this in my regular car. Evolution gave us thighs for a reason, people.

Keen to manage consumer expectations, many car companies are now tweaking the way they describe the vehicles of tomorrow. Some are using the terms “semi-self-driving” or “semi-autonomous.” Which is a shame, because using the prefix “semi” makes a word about 95 per cent less interesting. Don’t believe me? Semi-naked.

Mark Fields, CEO of Ford, recently acknowledged that we are at least 20 years away from hopping in a car, pressing a button, falling asleep and “magically winding up at grandma’s house.” He sounded matter-of-fact about it, but I’m not sure my grandma can hold out that long, Mark.