Tomorrow’s people and the body of the future

Brain caps that let us speak via our thoughts, cochlear implants that bestow super hearing. And it’s not far away. 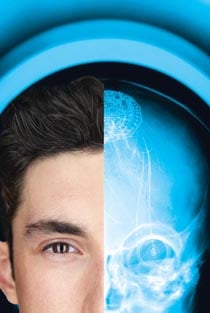 A century ago, the design of 21st-century man was unimaginable to anyone but sci-fi writers, and even they didn’t go far enough. No one foresaw a species able to prevent pregnancy with a pill. Or able to snake a wire up an artery to restore bloodflow. No one anticipated the sub-species of “Real Housewives”—women bronzed in tanning beds, filled with silicone and injected with a poisonous toxin to smooth wrinkles.

Such interventions are but a prelude to the human-design innovation to come, predicts Juan Enríquez, founding director of Harvard Business School’s Life Sciences Project. We’ve been given glimpses of that future: the thriving field of regenerative medicine is using stem cells to regrow old organs—and build brand new ones. Cancer patients have received new windpipes built from their own cells; spinal columns are being augmented with polymers. At the Massachusetts Institute of Technology, Edward Boyden’s lab has successfully downloaded a mouse’s memory to a computer, raising all sorts of possibilities for externalizing human memory. Scientists are isolating “high-performance” genes such as ACE, linked to the ability to adapt to high altitudes, and 577R, which is found in most Olympic power athletes. Meanwhile, neuroprosthetics are redefining “bionic man” with artificial limbs powered via little more than a bit of electric current and the person’s thoughts.

Man’s instinct to re-engineer is hard-wired, Enríquez says in an interview with Maclean’s. “We’ve transformed poisonous berries into beautiful heirloom tomatoes,” he says. “We’ve taken wolves and made them into various species of dogs; we’ve taken corn and made it a completely unnatural plant—grains the same size and colour.” And now, in making the human body itself the platform for innovation, we’re propelling the evolution of the species itself. In Homo Evolutis: A Short Tour of Our New Species, an ebook he co-authored with Steve Gullans, Enríquez writes that Homo sapiens have already evolved into “Homo evolutis,” defined as “a hominid that takes direct and deliberate control over the evolution of his species, her species and other species.”

The result, Enríquez says, will be an explosion of various species of varying genetic composition. And soon. Our children or grandchildren, he says, could take different enough biological forms from us to be considered another species entirely.

In conversation, Enríquez dials back his timeline slightly. “Though it takes centuries for entire species populations to separate, you are going to start to see clusters, looking like very different types of things.” The history of genetically modified food offers a model, he says: “Over 20 years, plant life in one place is completely different from another. Grain harvested in Canada is very different than grain harvested in parts of Europe.” New natural selection will hinge on money and government policy: “Some countries will veto procedures like stem cell and gene therapies; others will push for them,” he says. “And you’ll get every type of variety in between.”

Evolution isn’t linear, he says, noting we’ve been conditioned by the human timeline pioneered in Ernst Haeckel’s black-and-white silhouette drawings—“something climbing out of the primordial ooze that becomes a monkey, then a human, then a human sitting at a computer.” Rather, evolution branches like a tree. “You tend to get various versions coexisting,” he says, noting we’ve already seen 30 Homo sapiens iterations.

Thousands of loosely connected pieces are accelerating the process: “How we drug ourselves, the kind of information we put in our brain, what we eat, technology.” The rise in autism is an example. Enríquez theorizes it could stem from rapid evolution of the human brain, as the average person is barraged by more data in a day than people living a century ago absorbed in a lifetime.

The upshot will be societal shifts more seismic than those of both the industrial and digital revolutions, he predicts. As for specifics, he’s mum. “You have to be really arrogant to say, ‘I know what humans are going to be like in 500 years,’ ” he says. History shows that genetic flux influences societal values. Enríquez uses the example of blue eyes, which didn’t exist until 10,000 years ago, when they emerged by way of the Black Sea, resulting from a mutation in the OCA2 gene that turned off the mechanism producing brown melanin pigment. “If you told me 11,000 years ago that it turns out people are going to have blue eyes and it’s going to be really successful and get people modelling contracts and mates I would have said, ‘Ha!’ Which is totally wrong.”

One safe bet is hominids of the future being as smooth as seals, with character-defining scars a thing of the past. “The focus now is duplicating the capacity humans had in utero to heal without scars,” says Gail Naughton, CEO of San Diego-based Histogen Inc., and a pioneer in the tissue-implementation field. “Scarring is unwanted cosmetically, but medically, too, it’s very harmful in that it reduces the function of organs or bone cartilage.”

“Certainly we’re going to make people live longer, healthier, happier lives,” says MIT scientist and engineer Robert Langer, renowned for developing “smart” implantable microchips that target drugs directly at tumours. He cites three areas of huge potential: nanoparticles that can target drugs to tumours; “smart” delivery microchips that release drugs by remote control; and drugs that can turn genes on and off, which could bring an end to fatal conditions like Huntington’s. Langer hopes to see prototypes up and running in five years.

Such innovation is forcing a reappraisal of what it is to be human. Neural mapping technology, for example, allows people to transcend corporeality. A “brain cap” permits paraplegics or those with “locked-in syndrome” due to conditions such as ALS communicate by wearing a cap that interfaces with a computer. Users think of a letter of the alphabet, and it’s transmitted to the screen.

“The notion of who’s handicapped and not will be turned on its head,” Enríquez says, pointing to Oscar Pistorius, the South African double-amputee sprinter who, running on carbon blades, competed at the 2012 London Olympic Games and then won gold at the Paralympic Games.

Cochlear implants are another example of a technology used to heighten function beyond what’s traditionally “normal.” Hearing has evolved over tens of thousands of years, Enríquez says, while hearing devices are evolving over months. “So it’s not totally inconceivable that in 20 years, people without cochlear implants won’t be hired by symphony orchestras because people who have them hear so much more—and in tones others can’t hear.” And that could lead to technology and medication once designed to achieve “normalcy,” like cochlear implants and even ADHD drugs, being employed for heightened performance.

Custom-ordering genomes like the “super Olympian” 577R is another prospect, though not immediately, Enríquez says. “Gene technology is not going to be invented or financed or structured because somebody wants to become an Olympic athlete, but rather to solve a life-threatening condition,” he says. “Once that is standard, it is not inconceivable that people will take it and put it into conditions that are bothersome but not fatal. After that, they’ll put it into aesthetic conditions.” (Even so, he points out, receiving a 577R isn’t going to automatically render someone an Olympian. “That requires unbelievable discipline.”)

The deployment of reconstructive surgical methods developed in the First World War into cosmetic procedures in subsequent decades offers an analogy to the evolution of science and technology. The current ravages of war are providing funding impetus, with the Pentagon investing more than $300 million into research on regrowing muscle and skin to treat burn injuries and transplant technology for lost limbs. We’re already seeing the science marshalled to end wrinkly skin and hair loss. Naughton’s company, Histogen, for instance, is developing skin serums and is in clinical trials with a “hair-stimulating complex,” an injection designed to grow hair that has a potential market of 300 million. They’re hoping to receive regulatory approval in Asia in 2015 and in the U.S. in 2016.

Just as the Old Masters explored the body as it was known then, so too are a new breed of artists focusing on representing this new body. Australian Lucy McRae, the first self-styled “body architect,” is working with biologist Sheref Mansy on a “swallowable parfum.” Once absorbed, the “digestible scented capsule” will transform skin into an atomizer, McRae explains in a press release. The scent’s potency will vary from person to person, “determined by each individual’s acclimatization to temperature, stress, exercise, or sexual arousal.” McRae’s past projects include an ultra-thin electronic tattoo lit up by touch, developed with Philips North America.

“Philips has been exploring design around the human body and emotion for years,” says spokeswoman Amy Shanler. McRae’s project was a test case, “It doesn’t imply Philips will go into the tattoo business,” says Shanler, “but it does help us understand how people feel about having electronics in or on their body, which can be applied to the health care area.”

Commercial applications of the various emerging technologies are easy to imagine. The cosmetics industry, for instance, is taking cues from biomedicine’s use of the body as a self-medicating vessel—Dennis Paphitis, founder of Australian skin care brand Aesop, recently announced plans to create a sunscreen ingested as a pill. So it isn’t surprising that biotech research has already yielded a new species of rich people. Enríquez, also a venture capitalist, is co-founder of Synthetic Genomics Inc., based in La Jolla, Calif., a company that funded the creation of the first synthetic bacterial cell. Langer’s work has been used in more than 100 million patents worldwide. Then there’s the emergence of outfits like the Ontario Brain Institute, which connects innovative research with investors. It currently has high hopes for Sense Intelligent, an Android-compatible app that helps deaf people experience sound using “Google glasses,” set for release next year. Sounds are captured, filtered and visualized, explains Alison Fenney, the entrepreneurship and management training coordinator, so that wearers “learn to interpret speech, music and ambient noise, and perfect their own speech.”

Enríquez expresses doubt that mankind is prepared for this Brave New World–Frankenstein–The Matrix mash-up. “I don’t think we’re ready ethically, politically, morally,” he says. Yet speciation is crucial for survival. “We can survive in different niches. Single versions of a species tend to go extinct. There is nothing that says because you’re big and strong you’re going to evolve. Those who adopt and adapt do.” Having different versions of hominids, as strange as it sounds, is actually a very smart way of increasing the odds of hominid survival. “That doesn’t mean all will survive,” he says, “but it does mean you’re not betting everything on 17 black.”

Langer expects progress to be hindered by “science challenges, regulatory challenges, money challenges.” One breakthrough creates another hurdle, he says. “You make people live longer, and there’s Alzheimer’s.” Brain downloading gives rise to the threat of brain hacking. “Every time you solve one big problem, there’s another big problem. That’s how you have to think about it. There’s always something.”

Watch Ramez Naam, technologist with the Foresight Institute, on decoding the human brain:

And here’s Andrew Hessel, biologist and co-founder of the Pink Army Co-operative, on making organs and organisms, and taking biology digital: