One-ton rover gets to work on Mars 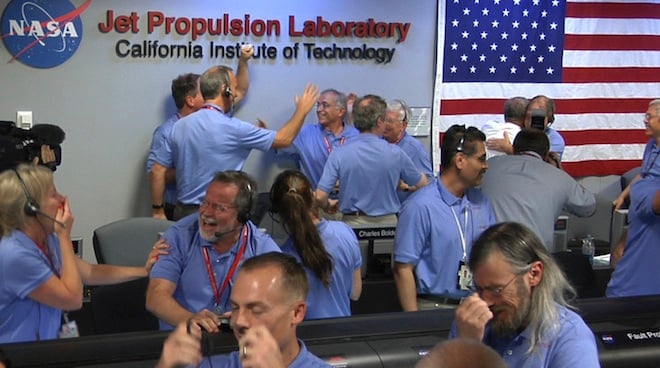 On Monday at 1:32 a.m. Eastern time, NASA’s Curiosity rover touched down on Mars to begin its two-year hunt for signs that the red planet once hosted life—or any indication that life could, one day, survive there. It’s the culmination of years of work by hundreds of scientists, finished off in a breathtaking landing. Curiosity’s safe arrival on the surface of Mars has scientists crying tears of joy, and everybody else wondering what this robotic explorer could find.

Already, Curiosity is beaming back images of the Martian surface. 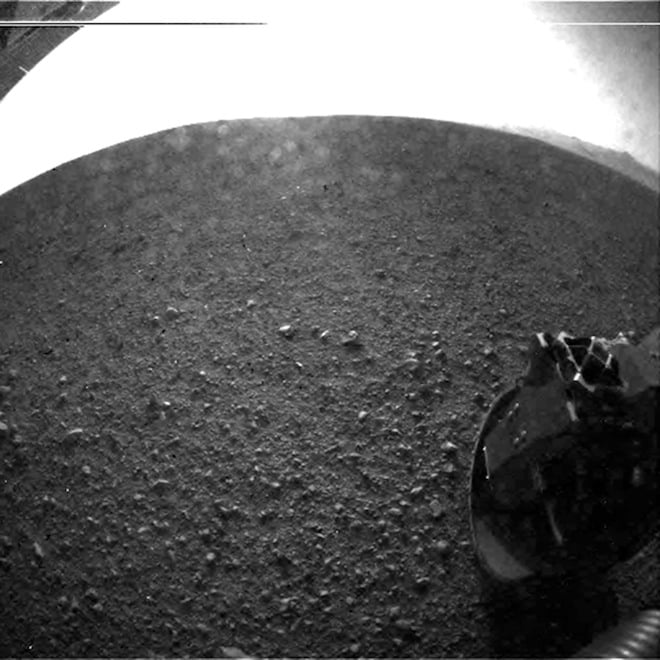 The image is one-half of full resolution. The clear dust cover that protected the camera during landing has been sprung open. Part of the spring that released the dust cover can be seen at the bottom right, near the rover's wheel. (AP Photo/NASA/JPL-Caltech)

Curiosity, which launched on Nov. 26, has been hurtling through space for eight months to reach its final destination:  the foot of Aeolis Mons, a mountain almost 5 km high, where layered rocks seem to suggest water might have once flowed, a sign it could have been hospitable to life.

Curiosity is the most advanced robot ever built. Plutonium-powered, roughly the size of a minivan, the one-ton rover was designed for rugged terrain: it has six-wheel drive, and can roll over obstacles up to 65 cm high.

Landing such a giant vehicle on the surface of Mars was, of course, no easy feat. After Curiosity came screeching through the Martian atmosphere, a humongous parachute (the largest ever used on another planet) popped open to slow it down. A “rocket backpack” was then deployed, lowering the robot from a cable in a highly risky maneuver. The cable was finally severed as the robot came safely to the ground, and the robot took off to crash itself elsewhere on Mars.

Now that it’s on the surface, Curiosity can begin to explore. It’s loaded with cameras and other instruments, including some of the most high-tech tools ever designed. Its ChemCam laser can vapourize rock from up to 30 feet away; Canada’s sent along an Alpha Particle X-Ray Spectrometer, an instrument that analyzes rock and soil samples. Curiosity, which is controlled remotely from Earth, will be a slow and meticulous worker: it can only travel about 200 m per day. Its main mission is slated to last two years, but then again, Spirit and Opportunity—Curiosity’s predecessors—were designed for three months, and Opportunity is still going strong (Spirit lasted six years).

With the future of NASA’s Mars program in doubt, Curiosity’s mission to search for signs of life is more important than ever.  And although it’s impossible to predict what sorts of stuff this rover could find, getting a minivan to land on Mars is an incredible feat.

Here’s a video courtesy of NASA detailing how the landing works.