After telling of her harassment, a feminist video-blogger raised over $100,000

Here’s a story the sums up everything awful and awesome about the Internet.

Anita Sarkeesian is a feminist video-blogger and media critic who did her grad work at York. She went on to video blog for Bitch magazine and her own Feminist Frequency site, where she produced a series of short videos called Tropes vs. Women, each of which examined a recurring sexist stereotype in TV or movies. Example:

The Manic Pixie Dream Girl is a cute, bubbly, young (usually white) woman who has recently entered the life of our brooding hero to teach him how to loosen up and enjoy life.

Sarkeesian’s videos are smart, lo-fi deconstructions of troubling things we see in pop culture all the time but may not look at too closely. They’re fairly popular as well, some having been viewed over 100,000 views. And they’ve been used as teaching aids in many classrooms, for free.

Last month, Sarkeesian launched a Kickstarter campaign to produce a new series of videos focusing on sexist tropes in video games. She set a modest target of $6,000 for five videos. The Internet responded. 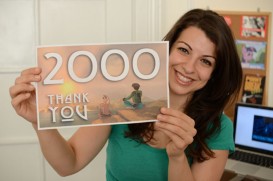 Anita Sarkeesian thanks her supporters

Sarkeesian blogged about the harassment.

After she did, something great happened. Things went viral. Supporters took a stand against her detractors by wildly over-funding her project. The more the haters hated, the more the donors donated. Tropes vs. Women in Video Games now has over 6,000 backers, who have kicked in over $141,000 to Sarkessian so far. As I write, there are still a few hours left in the campaign, so if anyone has something nasty to say about Anita Sarkeesian, hopefully they’ll do so, and make her some more money.