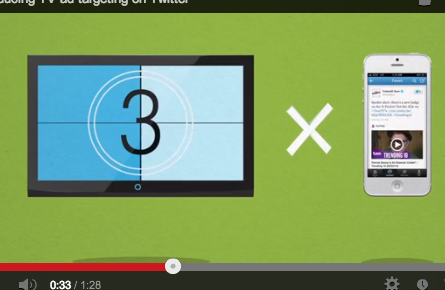 For those of us who get our shows via DVR, Netflix, or by various other means, television commercials are blissfully a thing of the past. But to Twitter they are somehow the future.

Here’s Twitter’s plan: they will track when and where ads are broadcast. If you tweet about a show, Twitter will figure out which ads you were shown along with that show, and then they’ll serve you Twitter versions of those ads. “What if TV commercials were just the beginning of the story?” ponders Twitter, in this promo clip explaining the plan.

We’ve known for some time that Twitter was moving hard in this direction, and the dominant role of TV in Twitter’s strategy was underlined here by their choice of Kirstine Stewart, a career TV executive, to helm their new Canadian office. But as each new initiative (remember Vine?) is shown to revolve around video and/or television, it’s becoming clearer that all of Twitter’s eggs are being placed in television’s basket.

In tech circles, common wisdom has it that TV is: a) dying and b) the enemy. Broadcast television in particular—the kind you watch as it’s aired, without the ability to “time-shift” or speed through ads—is regarded as a gross old wheezing dinosaur. So what gives?

Dino or no, TV ads still take in $120 billion a year. Twitter hopes to make $582 million through ads this year. Needless to say, Twitter would like some of TV’s money. And they think they can get it. After all, Twitter and TV go hand-in-hand. Twitter says that 32 million Americans tweeted about television last year. By “synchronizing” TV ads with Twitter ads, Twitter also hopes to plug into the existing advertising industry, offering revenue-sharing deals to traditional ad companies who have previously regarded social media as nothing but a threat. “Everybody in digital has it wrong,”  says Twitter global head of revenue Adam Bain to Ad Age magazine, “they have been going to market with an either-or proposition.”

It all seems quite savvy, a clever blend of new tech with old-fashioned deal-making. I have no doubt that advertisers will bite. But I’m not sure it’s the right move for Twitter.  Here’s why: