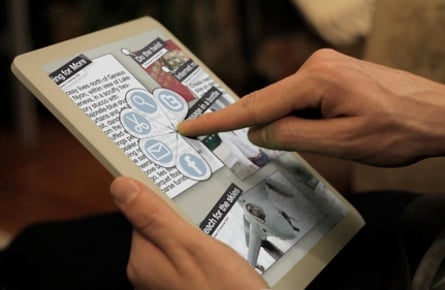 Picture this: you wake up to discover your baby has a weird rash. You log on to the Medicare website which connects you to an available physician via video chat. She checks your baby’s digitized health record, has a look at the rash, prescribes an ointment, and keeps you from burdening your pediatrician or the local E.R.

You then drive your other kid to school. You punch in the destination on your smartphone. A predictive GPS traffic database is pinged, which determines that though traffic is smooth now, it could soon get jammed up, based on 300 other drivers who just punched in similar destinations. This group is split up and directed to a dozen alternate routes, and congestion remains light.

While you drive, your kid finishes his homework on a tablet computer. It’s a French translation assignment, conducted in collaboration with a sister class in Paris that’s working on an English translation assignment. Your kid finishes the work, IM chats a bit with the French kid he was paired with, and then forgets the screen in your car. No biggie—the school will lend him a tablet for his classwork. They’re as cheap and ubiquitous as USB keys, and he can pull the finished homework assignment from the cloud.

You get to work and slack off a bit, checking out a song your friend just posted online. It’s a clever remix of a Beatles track. You send it to your car for the ride home, and an automatic payment of 99 cents is handled by your ISP—66 cents goes to your friend, 32 cents to Yoko and Paul et al., and a penny to your ISP, who dropped monthly access fees and now posts record profits by providing an insured and encrypted payment layer over the Web. You then quickly vote on a municipal bylaw through Facebook, and finally get to work.

Is the above a techno-utopian dream of the future? A starry-eyed vision of what next year could be? No, it’s a description of what last year should have been. All of the technology described above has existed for years now. But we are being held back. Legacy industries, lazy governments, obsolete laws, and pokey bureaucracies are among the culprits.

Meanwhile, as technology itself becomes more open and inclusive, our conversation about it gets more geeky and insular. We obsess over industry horse-races—LCD vs LED, HDMI vs DVI, 3G vs HSPDA—and the relentless, ever-tightening cycle that starts at novelty and ends at obsolescence. We are addicted to the promise of the next gee-whiz invention.

But invention isn’t the issue; implementation is, and that’s what I’ll be focusing on in this space. I’ll be posting thoughts, opinions and stories about the worldwide push to upgrade to yesterday’s technology. I’ll be featuring news of those who refuse to wait and are working around the barriers.

Hell, I may even review a gadget.