What exactly did Parks Canada secretly pay the CBC $65,000 for?

Jesse Brown on the broadcaster's deal with the government agency 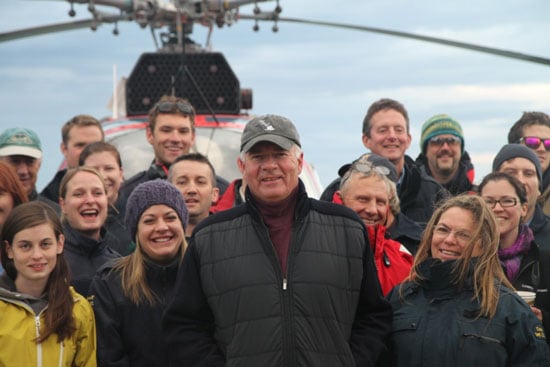 Peter Mansbridge with crew on the Sir Wilfrid Laurier.

Here are some alarming bits from a confidential 2012 agreement between CBC News and Parks Canada:

The contract was unearthed by the QMI news agency through an Access to Information request (you can read the whole thing here) UPDATE: the identity of the ATIP requester is unknown, but the first to report on this was independent news site Blacklock’s Reporter.  The document lays out a partnership that resulted in Peter Mansbridge and a CBC News crew joining Parks Canada archaeologists in Nunavut as they searched for sunken 19th century ships.  The salvage mission (thus far unsuccessful) was documented over two episodes of The National.

The story was picked up by Huffington Post Canada and various Sun newspapers. Sun News’ Brian Lilley, a regular critic of the CBC, wrote that this was a clear case of the CBC being paid for news coverage.

McGuire writes that her critics have “blurry” vision: the deal was simply a way for the CBC to save money, in two ways:

“The first was to share the costs of chartering a single plane together along with communications costs for phone, email, etc. That was smarter and more fiscally responsible than paying separately. The second was to create a joint website…For us, the motivation was to create a stand-alone website… Creating such a website would have been too expensive for us to do on our own.”

McGuire says Parks Canada’s payment of $65,000 to the CBC was absolutely not payola for a segment on The National–it was reimbursement for their share of the website building costs. The Huffington Post points out that the resulting $65,000 invoice ($74,733.75, after tax) makes no reference to a website, but does say that “CBC will provide news coverage on various platforms.” There’s also no discussion of building a joint website in the contract itself, where the $65,000 fee first appears.

But let’s say that this was still somehow the case and that the money wasn’t for coverage on The National, it was for this site:

McGuire calls the site a “standalone…joint” website. It is neither. The site doesn’t stand alone, it sits under CBC.ca’s URL, in the “news” section, as a “feature.” As for being a “joint” site, which suggests it’s not the result of CBC covering Parks Canada, but of teaming up with them, there is no indication of this on the site. There is an embedded Twitter feed from Parks Canada, and you can make of that what you will, but I’d say that there is no reasonable way a visitor would be able to distinguish the site from other CBC news content or have any idea that it was paid for in any way by Parks Canada.

In splitting hairs between television and Internet, between taking money for travel costs (which the CBC’s journalistic standards guide forbids) and taking money to build a website (which the guide neglects to ponder) the CBC is obfuscating, evading, and eroding its credibility.

Viewers don’t care whether or not the CBC found a loophole to its own internal rulebook. And if viewers had been told that a light, puffy adventure story of little political consequence like this was the result of a financial relationship between Parks Canada and the CBC, they might not have cared much about that, either.

But nobody likes getting duped, and no public broadcaster should be striking secret deals with their subjects over news content. It makes one wonder: is this the only such deal, or are there more? With whom?

Until now, when watching The National or visiting CBC.ca, I never imagined for a moment that the subjects of the news stories I found had paid the CBC to be there. But until the CBC makes a complete and honest account of this…well, who knows?