When he invented email, Ray Tomlinson also transformed the @ sign from 1,500-year-old typographic relic into the workhorse of Internet communications 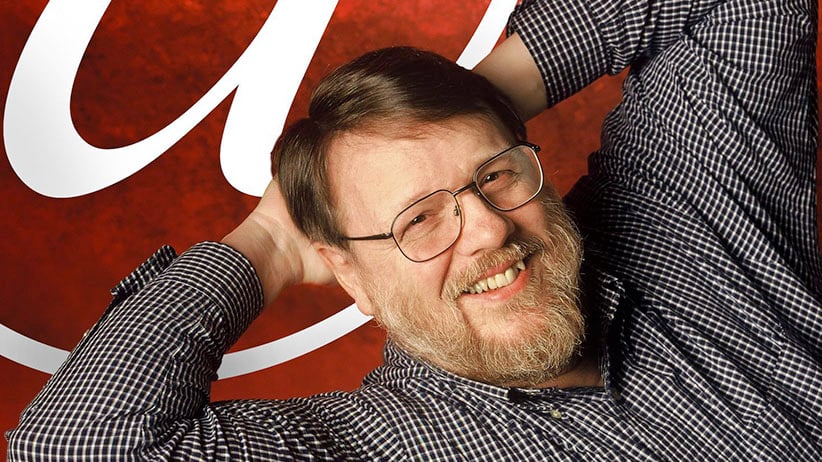 A quirk of the @ is what we call it. Even before Ray Tomlinson died on March 5, plenty of digital and real ink had been spilled on the symbol he helped revive, and which many of us use multiple times a day. The little circle with an “a” in the middle was, to early Internet users, a complete mystery.

Some of us may still remember when Katie Couric and Bryant Gumbel debated its pronunciation on the Today Show in 1994 (or, perhaps, we remember the clip going viral recently when the two reunited for an advertising campaign). The email address Gumbel was supposed to read was violence@nbc.ge.com, but he stumbled on it.  “That little mark, with the ‘a’ and then the ring around it?” he asked aloud. “At?” their co-host suggested. “See, that’s what I said. Katie said she thought it was ‘about,’ ” Gumbel replied. “But I’d never heard it said. I’d only seen the mark, but never heard it said. And then it sounded stupid when I said it: ‘violence at NBC.’ ”

“What is the Internet, anyway?” he asked a moment later.

He was right, of course: what he read aloud did sound a bit stupid. Yet, as history would show, the blame for that fell not on the little circle with the “a” inside, but on the poor soul who created the email address (who would surely these days be fired for such a mistake, likely after a hefty Internet shaming). Now that little symbol has become ubiquitous. Wherever we travel on the information superhighway, it’s there to greet us.

Still, Gumbel’s question has only been partly answered.

To understand the @ and what we call it, we might want to consider its origins. When the Museum of Modern Art’s department of architecture and design added the @ symbol to its collection in 2010, it explained briefly its pre-Internet usage. “Some linguists believe that @ dates back to the sixth or seventh century, a ligature meant to fuse the Latin preposition ad—meaning ‘at,’ ‘to,’ or ‘toward’—into a unique pen stroke,” the MoMA said. From there, the symbol hung around, mostly used in Venetian trade, “where it was used to mean amphora, a standard-size terracotta vessel employed by merchants, which had become a unit of measure.” By the late 19th century, it had made its way on to some typewriter keyboards, defined as the “commercial ‘a’ ” by the American Dictionary of Printing & Bookmaking.

Thus it is perhaps understandable why, more than 100 years later in 1971, Tomlinson decided it might be just the thing he was looking for. He was working for Bolt Beranek and Newman (BBN) in Boston, where, according to Wired, he and a colleague were put in charge of “what amounted to a new operating system” for the government’s new computer network, ARPAnet, the precursor to the Internet. Other researchers who used ARPAnet at the time were able to send one another messages, but it was more along the lines of message posting than delivering. That changed when Tomlinson devised a way to direct a message toward a particular user with a system that relied on the @ symbol.

As he told Wired in 2012, “I looked at the keyboard and thought: ‘What can I choose here that won’t be confused with a username?’ ” He settled on the @ because so few people had used it to that point. And why would they? It was a relic in any context other than as part of computer codes or on accounting invoices. Tomlinson told Wired that “of the remaining three or four characters” he could use that didn’t already appear often in usernames, “the @ sign made the most sense. It denoted where the user was … at. Excuse my English.”

It’s nice to know even he stumbled on it. Though, as Tomlinson also said, the @ symbol is “the only preposition on the keyboard,” which means that it’s inherently a weird thing to name. This was exemplified in lengthy detail in a post at the Guardian where readers submitted suggestions on its pronunciation. “In Israel, the @ symbol is often referred to as ‘strudel,’ ” someone noted. “It is called ‘atmark.’ Its use in Internet addresses has led to the production of a computer intended for accessing the World Wide Web called the Atmark computer,” another definitively stated. Someone else said they’d “heard someone on Radio 4 refer to it as an ‘e-snail,’ which I thought was nice.”

It’s safe to say at this point, calling it the “at sign” or “at symbol” is good enough, though neither of those descriptions give it a true standalone moniker—in English, anyway. And given its most prominent usage now, shouldn’t it deserve one? After all, whether it’s via email or on Twitter, on Instagram or Slack, that little @ gives us each what it doesn’t yet have—a distinctive name and title.