What your car isn’t telling you

Driving schools have a new challenge: features in cars that make us safer—and stupider 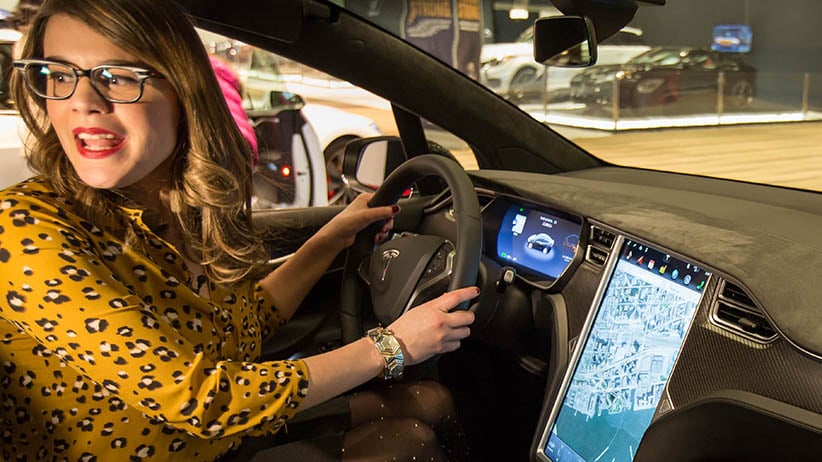 When 16-year-old Alessia Weinberg signed up for driver’s ed, she didn’t expect to confront a paramount conflict of modernity: artificial intelligence versus the human mind. But it’s what she’ll face when she starts driving her family’s SUV, a Volvo XC 60, which hosts an arcade of new features. The vehicle will identify the key fob in her pocket, while the seat sinks to her mother’s settings until she can’t see over the dash. As she drives through Toronto, her windshield will flash and her dashboard will jingle to tell her when a cyclist crosses her path or she veers over a yellow line. Blind-spot detectors will beep in case she doesn’t do shoulder checks (though they won’t specify if the approaching object is a bicycle or a bulldozer, and may not beep early enough for her to react). “Intellisafe” brakes will kick in when something inches out ahead, even if she sees the obstacle herself, and adaptive cruise control will mimic the speed of the car in front, until the speeding detector warns her that it’s too fast.

Driver’s ed, she says, needs to “talk about how to cope with it all.” And indeed, it will. Her driving schoool, Young Drivers of Canada, has updated its curriculum for the first time in seven years, to teach students about new features in vehicles. Technology lessons now comprise about six hours of the 40-hour program and will further expand in the next year. The changes come at a time when vehicles are becoming bells-and-whistles-on-wheels—not yet autonomous, but involved enough to make drivers sloppy, distracted and overconfident. The school’s president, Peter Christianson, says it needs to “teach people what they’re driving.”

Like many drivers, Weinberg won’t bother with her car’s manual, which is 525 pages. That’s slim compared to the 748-page manual for a high-end Lexus. Don Gray, sales manager at a Volkswagen dealership in Edmonton, encourages his sales reps to spend one or two hours with new buyers to teach them a class of “Volkswagen 101,” but, he says, “the customer is always king. We respect that some people are in a hurry. We can basically hand them the keys and send them on their way.” If drivers don’t understand the features, they risk driving into trouble.

Related: Is there an auto bubble on the horizon?

The features have serious limitations. Although the U.S. federal government has mandated all new cars come with backup cameras by 2018, cameras are low-resolution and don’t detect ice, gravel, or even people, as well as the human eye can (not even the cameras that have miniature jet washers to keep the lenses clean). “If you’re going to simply watch TV and back up, it’s not to be relied on,” says Stewart Brookins of Safe Drivers PEI, a driving school that operates across that province. “To be honest, the jury is out on those features. They’re not foolproof.” Young Driver’s instructor John Freyseng agrees: he tells his students to be just as cautious backing up as when approaching corners, as no cameras can see around bends. “That’s a piece of technology that hasn’t been invented yet,” he tells his class. (Actually, it has. The 2015 Ford Edge and Explorer, sold in the U.S. and China, have split-view cameras to see around bends, but they can’t be followed blindly either.)

Safety features may also indirectly lead drivers to behave more dangerously, due to what psychologists call “risk compensation.” The phenomenon has been happening since the advent of seatbelts, which led people to speed up. “It’s really something sad about human nature,” says Lana Trick, director of the University of Guelph’s Drive Lab. “You have to find a way to make them safer so they don’t know they’re getting safer.” When Trick put drivers in a simulator and told them to watch for moose, drivers sped up when they knew their cars were equipped with special moose detectors. By the time the detectors told them to stop, they were driving too fast to react in time. “The moose would be in the backseat before people stopped the car,” says Trick.

Then there’s the simple distraction factor. A study in 2014 by the American Automobile Association and University of Utah found that drivers who made calls and sent text messages using in-car systems, which are often frustratingly inaccurate, were more distracted than those who used handheld devices, which already increase the chances of a collision by four or five times. Although, it’s worth noting that people also worried about new technologies in 1922, when the first in-car radios threatened to take drivers’ eyes off the roads and lull them to sleep. (Toyota, Volkswagen and General Motors declined to respond to requests for comment on this story.)

The technologies aren’t unique to cars; they’re also appearing in trucks and transport trailers. “Truck driving isn’t just driving in a straight line anymore,” says Greg Reeder, the curriculum developer of the trucking program at British Columbia’s Valley Driving School. Eighteen-wheelers come with backup cameras, which undoubtedly add a layer of security: Reeder notes one test in which 64 people could stand behind a truck not equipped with a camera, and the driver wouldn’t see anybody in his side mirrors. But the manual checks are vital, and instructors at Valley urge students to still “get out and look” before backing up. New trucks also come with auto-adjusting brakes and pressure and temperature monitors on every wheel—also useful features than can result in some drivers inspecting their trucks less frequently. “For many years,” says Reeder, “every morning, for every break on every wheel, they’d climb under the truck and manually check. Drivers aren’t climbing under their trucks anymore and noticing other problems. It can make more lackadaisical drivers not do their proper pre-trips.” New eco-friendly filters, likewise, require truck drivers to plan for the vehicle to be parked for 15 minutes to clear the filter. Anti-smog exhaust systems require drivers to carry extra diesel exhaust fluid, lest they run out and end up putting along at eight kilometres an hour. “There’s been people left on the side of the road,” says Reeder.

Trucking companies are now using telematics, which are like black boxes for road vehicles, allowing employers to monitor everything, down to how fast their drivers accelerate. As vehicles become more autonomous, drivers become less anonymous. Telematics insurance policies are available for cars as well, and telematics are showing up in court during personal injury lawsuits. Trick says drivers are also filing a new type of lawsuit against GPS companies, because “there’s a certain kind of person who only does what the GPS says, so they end up driving into a pit or driving illegally.” She adds, “I was at a [driving] conference where people were saying that we’re in the golden age of litigation.”

Related: A new, and dangerous, kind of distracted driver

Of course, in the future, driving students could find themselves in entirely autonomous cars; on Jan. 1, Ontario became the first province to allow them on their roads. However, they won’t just need a regular driver’s licence, but also a licence not to drive. Currently, Google trains the users of its own cars. The volunteers, called “safety drivers,” spend four weeks at a Google facility in California learning how to interpret the emergency codes that appear on the in-car laptop, how to “disengage” the car, and how to steer with the car’s joystick (not to mention how to avoid being tailgated by other drivers who are transfixed at the sight of them).

Christianson says he would improve the training for safety drivers of autonomous cars by teaching them habits such as planning escape routes when threatened with a rear collision, and he also wants to teach the self-driving cars themselves how to drive. The people who program Google cars are engineers, and Christianson says they don’t understand how to avoid being hit from the back, the most common type of collision. “I’m in the books as saying Google should contact me and allow me to help build a better product,” he explains. “If they want to call, we’ll help them.” Similarly, Trick is worried that computer programmers at Microsoft are also planning to build autonomous cars. “Do we want the same people who gave us Microsoft Word and the blue screen of death, controlling our driving?” she says.

Although Christianson supports the advent of autonomy in cars, he says he’ll always want to teach people the basics—and not only for the sake of safety: “We would never want to lose the joy of driving. It’s a feeling of freedom,” he says. He argues the features could save lives but should always have the option of being turned off. “Total support,” he says, “but let us drive.”

When Weinberg takes her road test, she’ll be able to use most of the features in her car. But she’s forewarned that all provinces and territories require test-takers to do shoulder checks and look out the back window when backing up. Indeed, the road test requirements haven’t changed with technology, but rather with the law—or in the case of Quebec, with the environment, as the province requires test-takers to demonstrate eco-driving by braking and accelerating slowly to save fuel. Weinberg hopes to be ready for the road test by May. “It’s a huge responsibility,” she says. “You have to know that you’re driving something that could kill someone.”