What's a MakerBot Thing-O-Matic good for? 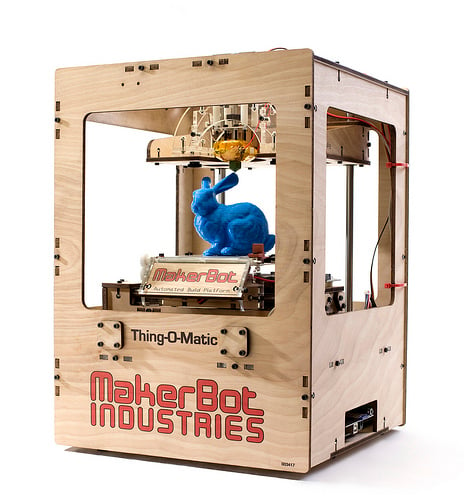 Correction:  the 3D printer described below (Makerbot’s newest model, unveiled at CES) is the Replicator, not the Thing-O-Matic (pictured above), as I goofed up and identify it as in this post. The Replicator costs $1749, not $1099. Here’s a link, and sorry about that.

Earlier this week I called this $100 OLPC tablet the most exciting gadget at the CES show in Vegas (which I am experiencing virtually). Some disagree, and suggest that I should have singled out this MakerBot Thing-O-Matic, an affordable 3D printer ($1099) that spits out bigger objects than the last 3D printer you all bought (right?)–and in two colors to boot.

I’m unconvinced. 3D printing makes certain geeks quiver with glee, but so far it’s left me kind of cold. The cheap little plastic choking hazards that result from the process look like they come from CrackerJack boxes, and rarely seem worth the time it takes to print them or the money that goes into the building plastic. Math-fractal jewellery made from 3D printed molds looks god-awful ugly to me, and the trippy dream of printing a 3D printer WITH A 3D PRINTER always struck me as the combined mental wankery of stoners + nerds.

But of course, I’m missing the point. 3D printing is still in its infancy. The hobbyists who are pushing it forward, and pushing the price of 3D printers down, dream of a not-too-distant future in which the digital revolution bursts forth from the world of bits and conquers the pesky and inefficient world of atoms. Stuff itself will never be the same. Manufacturing and shipping could become largely unnecessary. It would be almost like those replicators on Star Trek (or so I’m told). Put an object in a box in Toronto, and it will be scanned and printed out in Australia, as many times as you need, in whatever color, at whatever size, with whatever changes you require. We will be liberated from the cookie-cutter sameness of mass-production. Consumer goods will be downloaded and printed, not bought at the mall, and each individual will shape the stuff they want to their own needs.

Sounds awesome, but let’s not get ahead of ourselves. Yes, the price of home 3D printers will continue to drop as their speed and scale increase. But even a cheap, big, and fast 3D printer is only capable of spitting out plastic stuff, one part at a time. Assembly will be required, unless we also somehow have cheap and versatile home robotics in this bold 3D future. I can see the benefit for printing simple tools, machine parts and minimalist hipster toys. But most of the stuff we buy is made from multiple materials and many parts, and lots of it includes electronics. Even if it’s possible to design, say, the chassis for a tablet computer to your own personal specs, you’ll still have to pick up metal and glass parts and a motherboard, and then meticulously assemble the whole thing in your living room. Will something like that ever go mainstream?

I’m not holding my breath for a 3D printer in every home. To assume that these machines will do to manufacturing what 2D printers did to publishing is to make the same mistake we always make about technology, insisting that the future will be like the present, only more so. As with most technology, 3D printers will completely fail to do what we expect them to do, and will instead change the world in ways that no one is anticipating.

Sorry I can’t be more specific.