The Big Three carries have enjoyed their own 'unfair' advantage for years, writes Jesse Brown 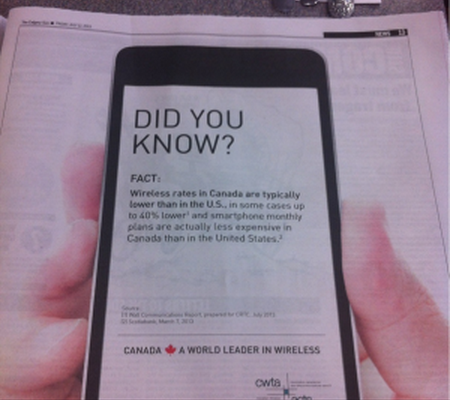 Bell, Rogers and Telus don’t think they are being treated fairly, and they want your sympathy.

Canada’s “Big Three” telecom giants have teamed up to oppose what they consider “unfair” advantages Ottawa is affording U.S. firm Verizon in its bid to enter the Canadian market. In addition to independent efforts—Telus is suing the government and Bell CEO George Cope has penned this open letter—the three incumbents have been filling Canada’s newspapers with full- page ads designed to win our hearts and minds. The ads, an effort of their shared lobbying group, the Canadian Wireless Telecommunications Association, attempt to convince Canadians we already enjoy great cell phone prices and wonderful service. “How about that!” the ads exclaim.

Well, how about that? The sources cited by the CWTA are problematic at best, and the consumer advocacy group OpenMedia has made short work of poking these claims full of holes, while pointing to other, independent research that has consistently placed Canada’s wireless speeds, service and pricing toward the bottom of the global pack. Canadians who care to compare these differing polls and studies can make up their own minds about which ones are most unbiased and truthful. But most won’t bother. If the question is, “am I getting a fair deal on my smartphone service?,” most people already have an answer, and no amount of newspaper advertising will change it.

One thing you can’t argue with the Big Three about is their claim that Verizon is getting special treatment by Ottawa. It’s absolutely true Verizon is being favoured—they are getting a chance to buy small players WIND and Mobilicity while the incumbents are not. They are getting special access to valuable high-speed wireless frequencies in an upcoming auction. It’s just not fair at all!

Yet I’m okay with that, and I suspect most consumers will be too. Bell, Telus and Rogers (the parent company of Maclean’s) have enjoyed unfair conditions of their own for years, favoured as they have been with free spectrum and by foreign ownership restrictions. What’s more, they have a long history of snatching up small, feisty competitors like Fido and quickly hiking up their prices, to a point where consumers have nothing but confusing illusions of choice. The Big Three also have the tendency to hoard spectrum, buying up big chunks of frequency that they don’t use for years, finally offering it in drips and drabs for premium fees. There’s a reason why Ottawa is favouring Verizon here, steering these resources towards a player that might actually use them and not neutralize them.

The fact is, the only way Verizon can take a chunk out of the Big Three’s 95 per cent market share is by offering lower prices with comparable or better service. I expect they will grant Canadian subscribers access to their U.S. network, easing the price hikes that occur when we travel south. Verizon is no hero, and many Americans are as ticked off with them as we are with our giant providers. But they have every reason to finally bring some healthy competition to Canada, spurring lower prices and higher speeds.

Why would we possibly oppose that?