They're a colossal waste of paper and space, not to mention annoying. So why won't retailers give them up? 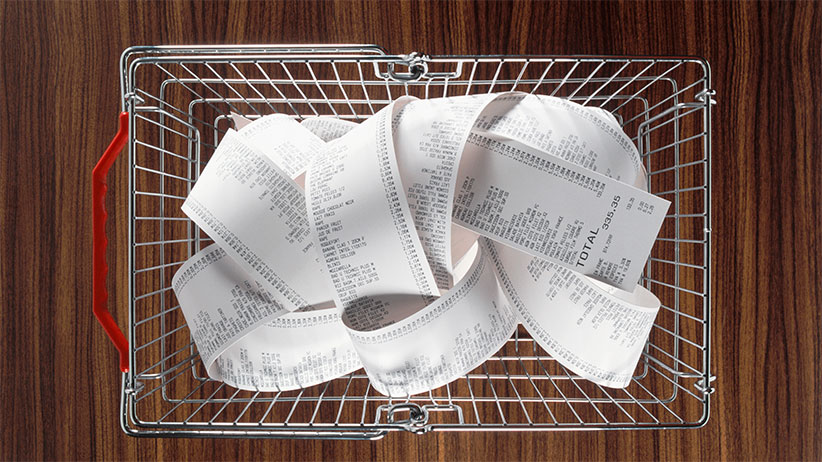 To save paper, Linda Quirke prints double-sided at work. She does the same thing at home. So why, she wonders, can’t stores print her receipts on both sides when she’s shopping?

Quirke, a sociologist at Wilfrid Laurier University in Waterloo, Ont., thought her wish had finally been granted when a recent grocery purchase at Sobeys came with a receipt that printed her food items on both sides of the slip—making it significantly shorter than usual. “Shout out to @Sobeys for printing the first double-sided receipt I’ve seen,” she instantly tweeted.

“I just thought it was about time,” she says excitedly in an interview later. “If this catches on, we’ll be using half the paper we are now.”

The endlessly lengthening cash register receipt is one of those invisibly pervasive complaints of modern life. Once upon a time a sales slip recorded the bare facts of your shopping transaction: date, store, item, price. Lately, however, the receipts extruded from store cash registers have reached tape worm-like status in both length and resiliency—festooned with coupons, contests, survey invitations, loyalty point summaries and return policies.

A small and entirely unscientific survey involving the purchase of a single pack of gum at several retail outlets produced receipts ranging in length from 10 cm to over 48 cm. The longest—more than a foot-and-a-half—from craft supply store Michaels and included a 40 per cent off coupon, an invitation to visit the firm’s website and a short note titled: “Dear Valued Customer” explaining return and coupon policies. It seems like a colossal waste of paper and space. And environmentally-minded consumers like Quirke claim to be paying attention. “I make deliberate choices about where I shop based on stores that I think are doing things right” she says. And wasting paper is definitely not doing things right.

With retailers reluctant to give up the opportunity to speak to their customers directly through cash register receipts—Quirke’s vow notwithstanding—can double-siding free us from the tyranny of over-stuffed pockets and purses? Not a chance.

A decade ago, several global printer companies heralded two-sided cash register receipt technology as a double-dividend boon to the environment and the bottom line. “Introducing the revolutionary two-sided thermal receipt printer,” crows a old promotional video from Toshiba. “This innovative paper printing technology reduces paper usage by up to 45 per cent, and in turn reduces your consumable costs and the impact on the environment.”

Despite bold promises to cut paper use nearly in half, however, no one seems to want to talk about it today. When contacted about their shout-out from Quirke, Sobeys demurred. The firm’s use of double-sided receipt technology was simply an experiment and after a few months of evidence the grocery store chain “may be exploring a different direction with receipts,” says a tight-lipped Maureen Hart, director of communications at Sobeys.

Toshiba also declined to discuss its double-sided cash register receipt technology, as did competitors Epson and NCR. So too numerous other retailers and retailing associations. For all its promises of savings, almost no one wants to open up about double-sided receipts.

“I’ve never had a client ask me about double-sided cash register receipts,” sniffs Harry Mitchell, vice-president of Armagh POS Solutions, a point-of-sale technology consultancy based in Hamilton, Ont. “No one wants it.”

The list of reasons for this lack of interest is almost as long as a typical Michaels receipt. Double-sided receipt printing requires special printers that cost substantially more than standard receipt printers, as well as custom software. They also need paper that’s thermal-coated on both sides. Not only is this paper more than twice as expensive as one-sided paper, but the extra coating makes it thicker, so paper rolls hold less paper, which means clerks must spend more time fumbling with replacement rolls.

Given that environmental causes popular with Canadian retailers, such as an end to free plastic bags, tend to save them money, the failure of double-sided cash register receipts likely rests on the fact it costs more money to produce shorter receipts.

Some retailers, most prominently Home Depot, offer to send you an e-receipt, eliminating the need for a paper slip altogether. Mitchell dismisses this possibility as another dead letter. “No one wants to stand at the register and hand over their email address,” he says. (As might be expected, Home Depot also declined comment.)

Does this mean we’re simply stuck with long-and-getting-longer cash register receipts? Perhaps not. “Technology will eventually solve this issue,” suggests Mitchell. The next ‘revolutionary’ idea to hit the check-out counter will be biometric scanning, he predicts. Soon you’ll be able to make all your purchases with nothing more than your fingerprint. Admittedly, digital shopping of any kind still requires digital receipts, presumably delivered via email. But Mitchell figures the security features of this new process, as well as the convenience of being able to shop without a wallet, phone or credit card, will eventually overcome consumer aversion to handing over an email address. And if so, then cash register receipts, and complaints about their length, could finally be consigned to the history books.

The ultimate impact on the environment, however, will depend on what people do with all those e-receipts. “I just hope they don’t go home and print them off on 8 ½-x-11 inch paper,” quips Mitchell.