Why did Digg fail? For disrespecting its geeks.

By normalizing its power users, Digg upended the entire dynamic of its community 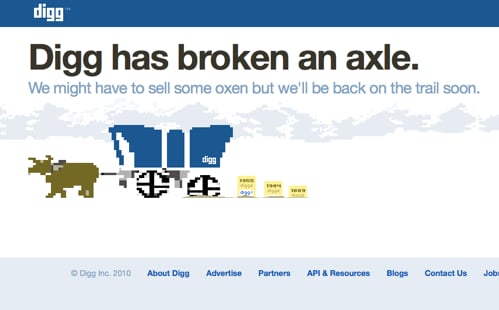 Last week the Wall Street Journal ran a shamefully delicious story about Digg, a once mighty “social news” site selling off for just $500,000.   The piece was especially tasty juxtaposed with a 2006 Business Week magazine cover featuring baby-faced Digg founder Kevin Rose giving a smug double thumbs-up as the big print declared that he was worth $60 million.  It seems the only story we like better than one of outrageous success is that of humiliating downfall, and the item was picked up far and wide.  Only it wasn’t true.

Digg sold for about $16 million, according to a credible account by TechCrunch.  The $500,000 (which may have  been more like $725,000) was just what Digg got for its code, domain, data, and traffic.  Digg’s other assets- its team and its patents, have been sold off to others for far greater sums.  $16 million is a long way off from the $160 million the company was once valued at, but the lady who cleans up the Red Bull empties and pizza boxes at Kevin Rose’s condo should still expect a nice Christmas bonus.

If we can’t derive any shameful joy from the story of Digg’s downfall, what can we glean?  According to a post today in Wired, the site’s implosion teaches a valuable lesson in managing an online community.  Wired interviews Miguel Lopez, an early contributor to Digg who became one of the site’s influential yet derided “power users’.  By turning its back on Lopez and his ilk, Digg hastened its own demise.

A little background: Digg was the first major site to feature socially ranked news.  It’s now a familiar system: users submit news stories, other users vote them up or down.  In its simplest form, this system would see the story with the most votes pushed up to page one, where the vast majority of views take place.  But in practice, relying solely on vote count as the determining factor for story placement results in a bad editorial mix.  For one, it’s too easily “gamed”.  Automated botnets and organized campaigns by other web communities can swarm a group of stories they want to publicize and artificially inflate their ranking.  So Digg did what many sites do- they devised an ever-changing algorithm to determine story rank.  Votes counted, sure.  But so did the reputation of the item’s author.  Someone who constantly links to different kinds of interesting content that then catches on would gain more influence on page one than, say, a hired gun from the pharmaceutical industry who spammed Digg with Cialis links.  These power-users in turn gained their own followers who would “digg” their posts with up-votes.

Before long, a handful of influential Digg contributors wielded incredible influence over the site’s front page, and many in the community grumbled.  Wasn’t Digg supposed to be an open forum where anyone could post the next big story?  Digg over-reacted to the criticism, re-engineering their algorithm to favor factors like Tweets and Facebook likes while stripping power users like Miguel Lopez of their influence. This move backfired, and Digg’s traffic plummeted.  As it turned out, power users like Lopez earned their influence by picking good stories.  Without them, the editorial mix suffered, but perhaps more importantly, the community faltered.

For every Miguel Lopez, there were thousands of Digg-contributors aspiring to achieve his level of influence.  And there were thousands upon thousands more who came to trust Lopez as a curator, and who read Digg to read Lopez.  By suddenly normalizing its power users, Digg upended the entire dynamic of its community. It did so in service of some stale social media ideology that has never proved particularly practical: namely, the idea of a system without elites.

Reputation economies like Digg thrive on elitism.  Social media jargon tells us that there are no audiences any more, just users- “the people formerly known as the audience”.  But for every thousand visitors, Digg would be lucky if 10 submitted stories. Those 10 are different from the other 990.  They have the time, the ability and the desire to contribute, and not simply consume.  They wouldn’t do it if they weren’t interested in playing a game where somebody wins, and where winning earns you a bit of status. It’s a game most people don’t care to play, but which the whole community benefited from.  A fierce and constant competition amongst power users created a front page that was always relevant and interesting to the 99% of visitors who came only to read.

Online status systems can be regulated and controlled to insure that everyone starts on equal footing, and that power is earned, not bought, traded, or inherited.  But when the hidden hand decides that everyone should have the same amount of power, which is another way of saying that power shouldn’t exist at all, things break down.