Why are the Conservatives keeping Trans-Pacific Partnership negotiations secret? 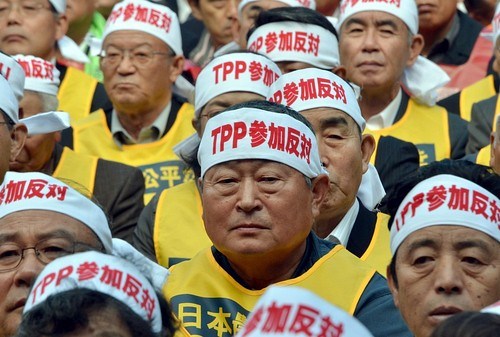 NDP MP Don Davies is the Official Opposition trade critic. As such, he’d love to have a look at the latest version of the Trans-Pacific Partnership (TPP), a huge trade deal currently being hashed out between Canada and 11 other nations. The problem is, he can’t get his hands on a copy. While any member of U.S. Congress can review the latest TPP draft, in Canada the governing Conservatives are restricting access. It’s just the latest in a series of transparency problems surrounding the TPP, a free-trade deal that would encompass two-fifths of the world economy and a third of all global trade.

Earlier this summer, Conservative Trade Minister Ed Fast hosted a TPP meeting in Vancouver in absolute secrecy. Only when Peruvian media leaked word of it after the fact did Fast own up. Earlier, Fast assured the press that no particular corporate group or interest had any special access to the negotiations. Shortly thereafter, Internet law professor Michael Geist turned up documents showing that Fast’s ministry had created a consultation group including Bombardier and the Canadian Steel Producers Association, both companies signed a confidentiality and non-disclosure agreement giving them access to “certain sensitive information of the Department concerning or related to the TPP negotiations.”

The Opposition has had enough. Today, MP Davies released a demand for transparency from the Conservatives. “The TPP is a sweeping agreement covering issues that affect many areas of Canada’s economy and society – including several areas of policy that have never been subject to trade agreements before,” says Davies in this release.

Which issues is he talking about? Despite the secrecy under which the TPP has been negotiated, a steady trickle of leaks since the process began in 2008 have provided insight into just how sweeping this deal might be. The implications have sparked angry demonstrations across the world, raising the hackles of everyone from Japanese farmers to New Zealand public health advocates.

Perhaps the TPP’s most passionate critics come from the tech world. Internet freedom advocates object to leaked details of the deal’s blanket intellectual property provisions, which they argue would overrule policies that sovereign nations have arrived at democratically, imposing draconian restrictions on Internet content. The Electronic Frontier Foundation calls it the biggest threat to Internet freedom since the defeated ACTA pact:

“The TPP is likely to export some of the worst features of U.S. copyright law…a broad ban on breaking digital locks on devices and creative works (even for legal purposes), a minimum copyright term of the lifetime of the creator plus seventy years (the current international norm is the lifetime plus fifty years), privatization of enforcement for copyright infringement, ruinous statutory damages with no proof of actual harm, and government seizures of computers and equipment involved in alleged infringement. Moreover, the TPP is worse than U.S. copyright rules: it does not export the many balances and exceptions that favour the public interest and act as safety valves in limiting rightsholders’ protection. Adding insult to injury, the TPP’s temporary copies provision will likely create chilling effects on how people and companies behave online and their basic ability to use and create on the Web.”

There may be an argument to be made in favour of the TPP, or parts thereof,  but it’s hard to debate a deal that no one in the public has official access to. As the Conservative government moves with partner nations towards finalizing the deal, it needs to realize that the longer it keep this thing under wraps, the more resistance it will meet.