Why the iPhone is bad for society 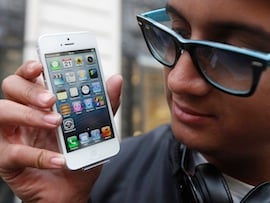 I was hoping not to write anything more about the iPhone after the flurry of activity last week, but one thing about the device – not just the new iPhone 5 model that sold more than five million units over the weekend, but all versions – still bugs me. The price.

As we learned in the patent case against Samsung, Apple is making a huge profit on the iPhone. According to court documents, the margin is double on what the company earns on the iPad. As Reuters puts it:

Between October 2010 and the end of March 2012, Apple had gross margins of 23 to 32 percent on its U.S. iPad sales, which generated revenue of more than $13 billion for Apple, the filing said. Apple does not typically disclose profit margins on individual products.

As I wrote recently, the reason Apple makes so much more on the iPhone is because it isn’t really selling the devices to consumers, it’s selling them to wireless carriers. The carriers turn around and sell the phones at a discounted rate in exchange for the subscriber signing on to a contract. In Canada, this inevitably means a three-year commitment.

To recoup the money they pay to Apple, the carriers also charge customers a certain amount for their monthly services. The naturally occurring question is thus: if the phones were less expensive, wouldn’t the monthly plans also be cheaper? Let’s do the math.

According to iSuppli’s tear-down estimate, the actual manufacturing cost of the 16-gigabyte version of the iPhone 5 is $207, which is a few bucks more than previous models. In the U.S., Apple is selling said model for $649. Using the 49-per-cent low-end of the court-reported margin, that means the company is making $318 profit on each device, after R&D, shipping, marketing and other costs are accounted for. Those costs appear to come to about $124, which means that the total cost of producing a 16GB iPhone for Apple is about $331.

What if the company extracted a lower profit, like it does on the iPad? Applying that low-end margin of 23 per cent, the iPhone 5 would sell for $410, or $240 less than what it actually goes for.

With a price tag of about $400, the cost of the device would begin to approach a level where contracts might not be necessary. More consumers would be willing to swallow the whole cost of the device up front, while carriers also wouldn’t have to pony up as much of a subsidy. Theoretically, that would mean monthly subscription fees could be lower. If more consumers were contract-free, they would certainly have more pricing power over their wireless carrier than they currently do.

The high-profit, high-subsidy, long-contract iPhone model—which, to be fair, every other cellphone manufacturer is dying to emulate—is therefore likely keeping monthly subscription rates higher than they should be. The benefits of having cheaper telecom services, of course, don’t really need to be explained: more usage, more diffusion, more productivity, more enabling of other capabilities. Expensive smartphones, ergo, are bad for society.

To put it another way: imagine if computers had stayed comparatively expensive. Where would we be as a society in that case?

Of course, all of this flies in the face of other economic principles, such as basic supply and demand. It’s also a foundation of our society that a supplier of a good product should be able to charge as much for it as people are willing to pay. With the brisk sales that Apple is doing on the iPhone, there’s obviously no shortage of demand.

It’s just too bad those buyers aren’t aware of how much better things could be.