Why are so many young women from Western countries running away from home to join a genocidal death cult? 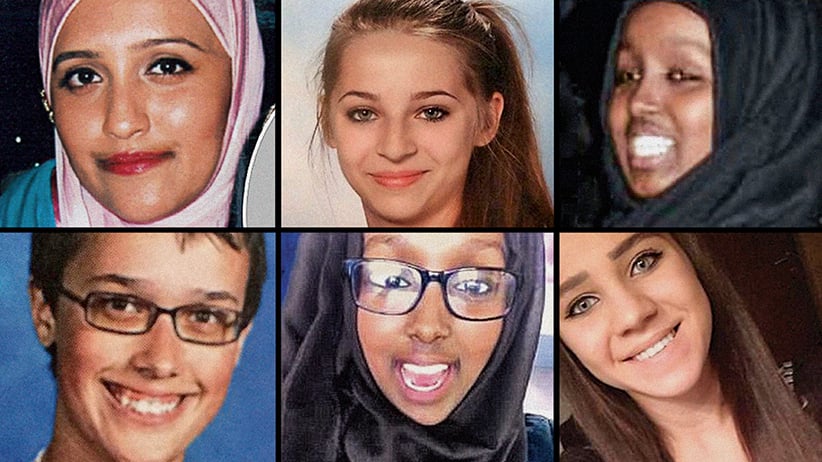 “The family you get in exchange for leaving the ones behind are like the pearl in comparison to the shell you threw away into the foam of the sea, which is the Ummah [community of believers]. The reason for this is because your love for one another is purely for the sake of Allah.”

Aqsa Mahmood, a British woman living in Syrian territory controlled by the ultraviolent Islamist group that calls itself Islamic State, can be almost poetic when counselling other Western women to abandon their homes and join her there. Blogging under the name Umm Layth, Mahmood crafts an appeal that mixes religious piety with material enticements. There is something pleasurable, she writes in a September post, in obtaining milkshake machines that have been looted from “the kuffar” [pejorative slang for “unbeliever”]. Rejecting your family is a religious duty, she continues, if they makes allies with the kuffar and reject jihad. Blood ties, she says, are nothing compared to living a truly Islamic life.

Mahmood is a persuasive saleswoman. At least one of the trio of young British girls, who left their London homes in February and are now thought to be with Islamic State in Syria, appears to have been in touch with Mahmood on social media. And Mahmood is not an isolated case. The CBC has reported that the family of a 23-year-old Canadian woman who recently joined Islamic State believes she was radicalized and funded by an Edmonton-based woman who taught an online course on the Quran.

Other Western women living in Islamic State territory are openly active on social media and have played a key role in the growth of a phenomenon that is unique to Islamic State among modern jihadist groups: the migration of hundreds of Western women to join it. The U.S. National Counterterrorism Center recently estimated there are more than 20,000 foreign fighters in the ranks of Islamic State. Of these, more than 3,000 are thought to be Westerners. And of those, according to the Institute for Strategic Dialogue (ISD), a London think tank, as many as 550 are Western women.

Last August, the department of public safety released a report that said Ottawa was aware of about 30 individuals with “a Canadian connection,” who were “suspected of involvement in terrorism-related activities” in Syria. Amarnath Amarasingam, a post-doctoral researcher at the University of Waterloo, believes the number of Canadians in Islamic State is now closer to 60. If the male-female ratio of Canadian recruits is similar to the that of other Westerners, it’s likely about 10 to 15 Canadian women have joined the group. Amarasingam is aware of at least six. One, who goes by the name Umm Haritha, has been in Syria since 2013 and was married to a Palestinian-Swede who died last year. She is a friend of Mahmood.

Two young women are among six Quebecers believed to have joined the Islamist group in recent weeks. Four of those youths were enrolled at Montreal CEGEP Collège de Maisonneuve last fall, according to the CBC. One of the students also studied Arabic and the Quran at a private school run by Adil Charkaoui, who rented space at the CEGEP.He was arrested in 2003 on a security certificate under suspicion of terrorism-related activities. The Federal Court later quashed the certificate, and Charkaoui became a Canadian citizen last year. At a press conference, Charkaoui denied that his former student had been radicalized at his school. The student had only attended two classes before quitting, he said.

Previous jihads, even high-profile ones, such as in Afghanistan during the 1980s and ’90s, did not attract anywhere near the same numbers of foreign women, and especially Western ones. Islamic State leaders want women because they believe they have created a genuine state, a reborn caliphate. “To perpetuate that, they need families. They need women and children,” says Patrick Skinner, a former CIA intelligence officer who now studies Islamic State’s use of social media as director of special projects at the Soufan Group, a security consulting company.

Unlike their adversaries in Kurdish militias, Islamic State does not allow women on the front lines. Some act as morality police, enforcing codes of dress and behaviour among other women. Jeff Weyers, a doctoral candidate at the University of Liverpool, tracked one Canadian woman whose tweets included her geographic location and revealed she had travelled throughout Syria and Iraq, suggesting she was gathering intelligence for the group. 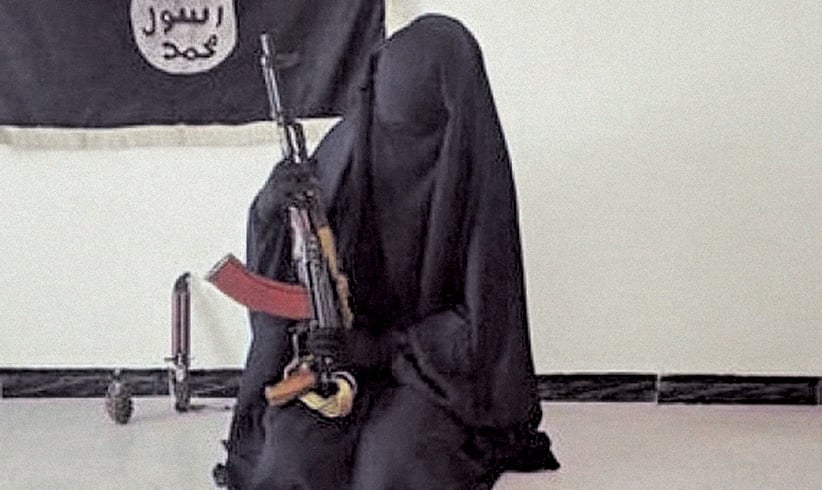 Most women, however, serve a domestic role. Some follow their jihadist husbands. Those who arrive single are quickly married. “They’re making babies,” says Michael Weiss, co-author with Hassan Hassan of ISIS: Inside the Army of Terror. Videos have emerged showing Islamic State cadres indoctrinating and brutalizing young children. Weiss likens children born under Islamic State rule, with no memories of another life in the West, to damp clay that can be easily shaped.

A secondary role for Western women involves propaganda. “What Islamic State offers is a full package,” says Erin Saltman, a senior researcher who leads the Women and Extremism program at ISD. “There is a strong sense that you are joining a family. They really play up the fact that you are among sisters, that everyone is treated equally. Part of it almost plays out a feminist narrative, which says the West sexualizes women and, in Islamic State territory, you are treated with respect.” Western women who can relate to and easily converse with potential recruits in the West are much better suited to this sort of outreach than would be women from Iraq or Syria.

It’s worth comparing propaganda aimed at Western women to messages targeting women from the region. The al-Khanssaa Brigade, a women’s activist group within Islamic State, recently published an Arabic manifesto about women in Islamic State that has been translated by the Quilliam Foundation, a counter-extremism think tank in London.The manifesto is particularly critical of countries in the Arabian Gulf, a detail on which Western female propagandists don’t dwell. The Quilliam Foundation’s Charlie Winter notes in an analysis of the document that it unambiguously stresses the sedentary role of women in Islamic State, and downplays themes of “adventure and excitement” that female Western recruiters typically highlight. “Women gain nothing from the idea of their equality with man, apart from thorns,” the Arabic manifesto asserts.

A Western woman recruit cited by ISD had other ideas, tweeting: “I wonder if I can pull a Mulan and enter the battlefield”—a reference to a Disney-movie character who disguised herself as a man so she could fight.

If western women provide Islamic State with wives and babies and propagandists, what is it about Islamic State that makes Western women want to join it in the first place? Some talk on social media about feeling discriminated against in their home countries, and of a belief that Muslims worldwide are under attack.

Shayma Senouci, 18, one of the six recruits who recently joined Islamic State from Quebec, complained on Facebook about the province’s proposed secular charter that would have limited religious symbols and dress in the public sector (it was never adopted). Also on Facebook, she described Israel’s actions in Gaza during last summer’s war as “genocide.”

Senouci’s social media posts are similar to the explanation given to the CBC by the sister of a Canadian woman who joined Islamic State last summer. The sister, who remains in Canada, said her sibling suffered anti-Muslim bigotry and was infuriated by events in Palestine. “She felt it was so unfair, and she didn’t feel that the Canadian government also protected Muslim people. It just made her feel like there was a lot of injustice in the world, and she wanted to do something about it.”

Some observers have also blamed social and economic marginalization for the radicalization of Western women. “Maybe we can stop young people like [the three British girls] from leaving this country if we gave them proper support, especially those in vulnerable situations; if we present them with equal chances and if we value them,” Humaira Patel wrote recently in the Guardian.

This type of explanation is bluntly rejected by Mahmood, the British Islamic State recruiter. “Most sisters I have come across have been in university, studying courses with many promising paths, with big, happy family and friends and everything in the [temporal world] to stay behind and enjoy the luxury,” she writes in her blog.

It may be true that anger about proposed polices regarding religious dress in Quebec, or what is perceived to be Canada’s insufficient support for Palestinians or Muslims elsewhere, contributed in some way to the decision of young Canadian women to join a genocidal death cult in Syria. But they seem like inadequate explanations.

Islamic State’s most notable characteristics, after all, are not vestmental liberty or practical support for Palestinians, but filmed decapitations, sexual slavery and mass murder. These elements of Islamic State’s approach to governance are all well-publicized, mostly by Islamic State itself. And they make the Canadian woman’s assertion that her sister—“the sweetest, most innocent, timid person I know”—joined Islamic State because she wanted to do something about the injustice in the world sound hollow.

They also ignore aspects of Islamic State’s attraction that we seem comparatively more ready to accept when it draws in men: the group’s Islamic supremacism, and its fetish for gore and extreme violence. “So many beheadings at the same time. Allahu Akbar [God is great], this video is beautiful,” tweeted one Western woman cited by ISD. Another, also cited by ISD, writes: “I was happy to see the beheading of that kaffir [unbeliever]. I just rewinded to the cutting part. Allahu akbar! I wonder what he was thinking b4 the cut.”

According to Jayne Huckerby, an associate professor of law at Duke University who has advised the United Nations on women in conflict, gender stereotypes distort popular conceptions of why Western women might join Islamic State. “We do still very much operate in a world where the idea that women don’t have agency—that they must be tricked or under the influence or brainwashed or they only joined to become jihadi brides—is very much still a dominant frame.”

There may be an element of brainwashing at work, something William McCants, a Brookings Institution fellow and author of a forthcoming book about Islamic State, describes as the group’s “cult-like pull.” It also appears that skilled recruiters can strongly influence young minds. But these are forces that affect men and women. And yet it is women whom we are more likely to describe as “lost” to Islamic State, rather than as willing partisans. This is comforting, but it is also illusionary.

No Western woman with access to the Internet or daily news can claim ignorance about Islamic State’s horrors, including those it inflicts on women it has captured. But young girls from Canada and across the West are joining the group by the hundreds just the same. “Many of them are going over joyously, with eyes wide open,” says McCants, “absolutely and completely understanding what awaits them there.”