That time life-sized, animatronic dinosaurs were on auction in Langley, B.C.

Bidders at a sale of the velociraptors, pterosaurs and T. Rexes this August fell into two categories: grazers and carnivores 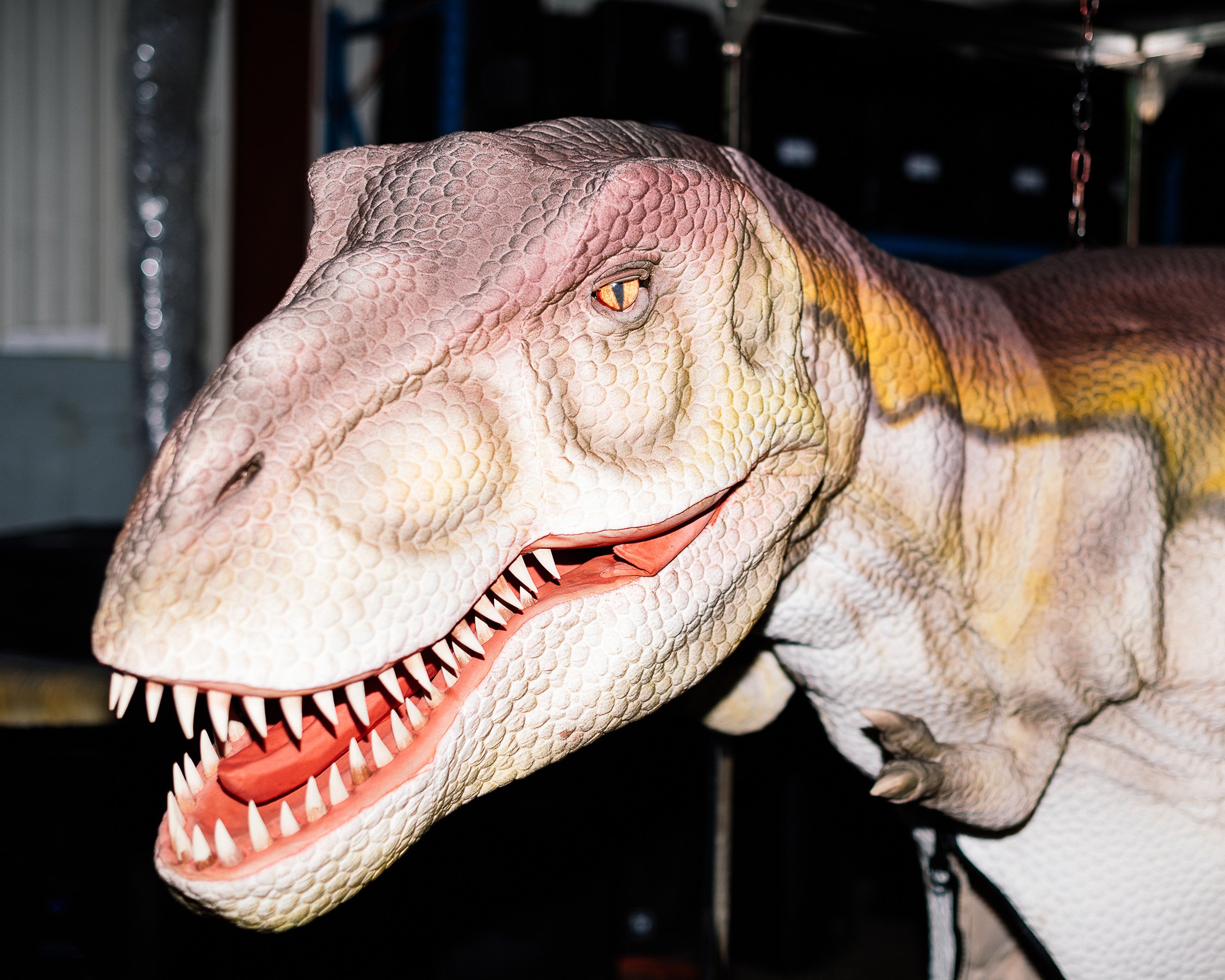 More than 500 dino-related items were up for grabs at Able Auctions in Langley, B.C., in what one auctioneer called a once-in-a-lifetime event (Photograph by Alana Paterson)

Bargain hunters might have anticipated the roars and shrieks spilling into the street. But even with the auction house in full view, an 18-foot-tall Tyrannosaurus rex gnashing its teeth in the parking lot was enough to stop them in their tracks.

On a balmy day in August, an industrial park in a corner of Langley Township turned a tad Jurassic when about 50 life-sized, animatronic dinosaurs overtook Able Auctions.

Prospective bidders from around the province trickled into a packed warehouse brought to life by the herd. Past a gruesome velociraptor clawing at the entrance, and a pterosaur perched overhead, beating its wings and screeching at passersby, the dinos left little room for visitors to snake through the aisles. One particularly hostile yangchuanosaurus—imagine a T. Rex with a bony ridge on its snout—parked on the sidelines kept whipping its tail into traffic.

But there were more than just machines inside. Display cases and shelves throughout the space were chock full of hundreds of other exhibits also up for auction the following day: prehistoric fossils (from eggs, to full skeletons, to excrement), casts of the genuine articles, and a scale that balances a human’s weight against a dinosaur’s, to list just a few.

Some of the items were branded “Dinosaurs Unearthed,” one of several touring exhibits that belonged to Richmond-based EMG Experiential Media Group. According to a KPMG report, the company, which filed for bankruptcy in May, designed and created touring exhibitions appearing at museums, zoos and attractions around the world—including Vancouver’s Pacific National Exhibition. Able Auctions CEO Jeremy Dodd said his company scooped up the exhibits and arranged for more than 500 items to be auctioned off.

Once word of the sale hit the web, it didn’t take long for everyone from amateur dinosaur buffs to exhibition companies to recognize what auctioneer Rob* Kavanagh called a “once in a lifetime” opportunity. In his 20 years with the auction house, he’d never seen a sale quite like it—a chance for almost anyone to get their hands on a piece of prehistory. 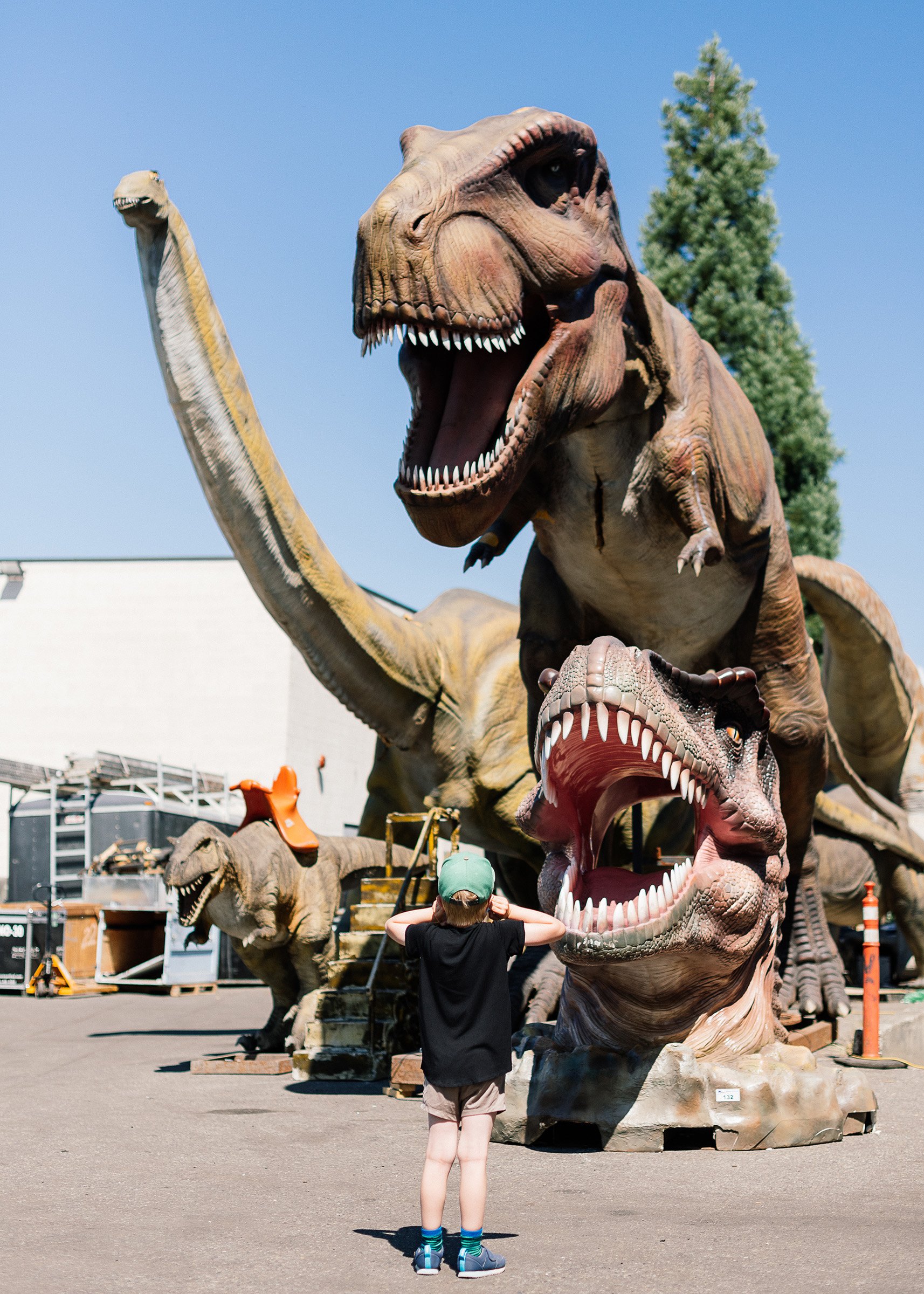 Josiah, who came to the auction with his dad, takes in a T. Rex (Photograph by Alana Paterson)

It was enough to entice Andrew Goertzen, a first-time auction-goer weighing in at 1/95th of a tyrannosaurus, to drive up from Ladner, B.C., with his five-year-old son, Josiah. He had his heart set on a fossilized tooth, preferably from a T. Rex (his son’s favourite). Anything more monstrous or mechanical, he said, would have been impractical for his family’s condo: “I’m pretty sure [the condo corp.] won’t be on board with having a big dinosaur on the patio.”

Josiah himself seemed wary of the animatronics, standing before the T. Rex—otherwise known as Lot 88—with his hands cupped over his ears.

As the enthusiasts browsed, the more business-minded visitors stood apart, betrayed by clipboards and binders they held close while coursing through the warehouse with an air of detachment.

Among them was Rob Galey, general manager of a family-farm-cum-roadside-attraction near Victoria that features a corn maze, a ghost town and a seven-metre-tall garden gnome. Galey said online commentary around the auction convinced him “there’s only one place these things belong, and that’s at Galey Farms.” With more than a mile of railroad track running around the property, and nearly a dozen animatronic dinosaurs already on site, he had a mind to furnish the scene with a few more. But he had his doubts as to how the free-for-all would pan out. “You never know, some multi-billionaire might like some pieces for his kids—just for the backyard,” Daley said. “But turn your head,” he added, gesturing to Lot 88. “No one’s got room for this.” 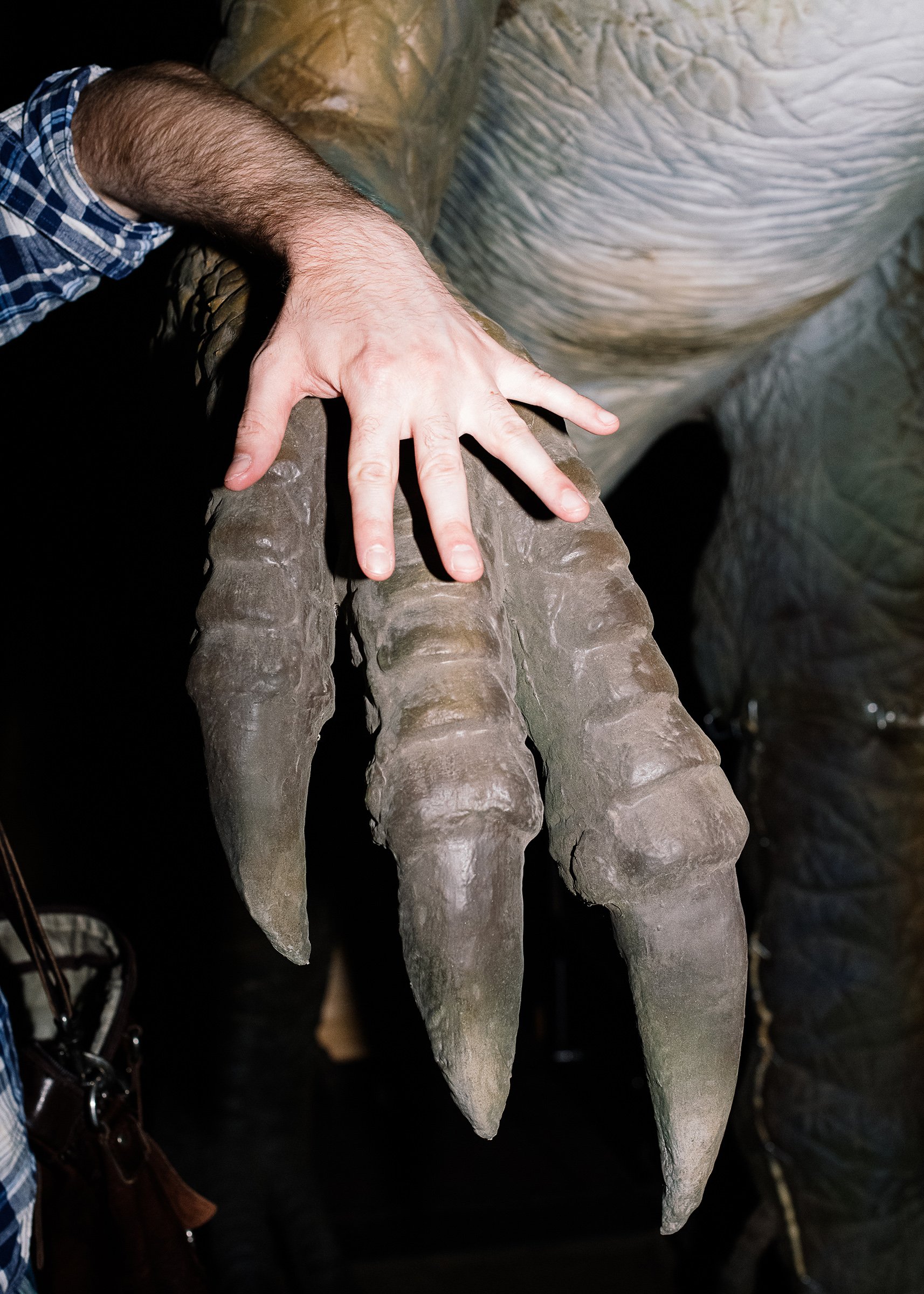 The bidding war that ensued less than 24 hours later begged to differ. At 11:30 a.m. the following day, the tyrant lizard’s number was up. For the first 30 seconds, the floor was silent. “Should be bids here,” an onscreen message prodded, before someone from Vernon, B.C., kicked it off at $10,000.

A short skirmish ensued between competitors from Victoria and Gilbert Plains, Man., before a dark horse from the dinosaur capital of Canada, Drumheller, Alta., entered the fray with a $20,000 bid. That caught the attention of a Burnaby, B.C., bidder who raised the stakes to $25,500.

And then it was on.

For a minute and a half, the Burnaby and Drumheller bidders were neck and neck, besting each other $1,000 at a time. The challenger from B.C. tapped out about $10,000 later, when another from the same city picked up the torch. But the Drumheller bidder didn’t miss a beat, and delivered the closing offer, winning the T. Rex for $38,500—the price of a small SUV. The auction house didn’t disclose the buyer’s identity, leaving it a bit of a mystery. While Drumheller’s Royal Tyrrell Museum didn’t participate, a spokesperson said, the Drumheller and District Chamber of Commerce copped to taking home some dinosaurs, although Lot 88 wasn’t one of them.

Goertzen, who was watching the bidding from home, said he was rooting for local bidders after recognizing the Alberta buyer from a few other wins. He felt some ferocious competition himself when bidding for spinosaurus and mosasaurus teeth. With a budget of $300, he had to drop out early and watch the pieces sell for $800 and more.

“It was more aggressive than I was expecting,” he acknowledges, “and definitely above the price range that had been agreed upon with my wife.” Still, he added, the whole experience won his son a few dinosaur memories, and you can’t put a price on that.

CORRECTION, Sept. 3, 2020: A previous version of this story incorrectly stated the name of the auctioneer. His name is, in fact, Rob Kavanagh.

This article appears in print in the October 2020 issue of Maclean’s magazine with the headline, “Pricing out the predators.” Subscribe to the monthly print magazine here.