The anti-racist ad that triggered a backlash

One white man acknowledged his 'privilege' on a Saskatoon billboard. A lot more took it personally. 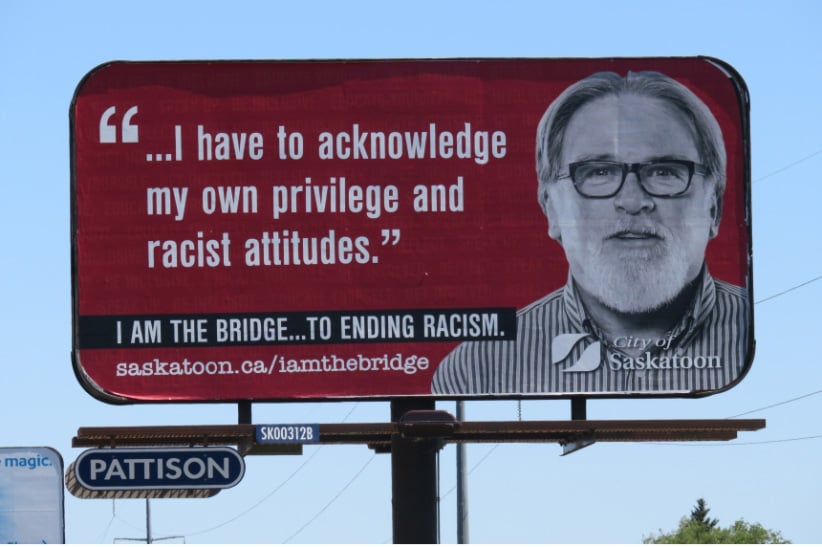 “I am the Bridge” campaign billboard in Saskatoon. (650 CKOM)

The man with a white beard, glasses and pleasant half-smile looks unassuming on the deep red billboard looming over the busy Saskatoon freeway. But to judge by the public reaction to his words, displayed in white block letters next to his portrait, you’d think this man was a rabble-rouser.

It’s unintentional, of course. Jim Williams, the man in the billboard, is simply a Saskatoon resident who volunteered to share his thoughts on racism as part of the city’s anti-racism campaign called I Am The Bridge. In 2015, the Community Diversity and Race Relations office of the city’s community development department launched the campaign in response to the Truth and Reconciliation calls to action, specifically around anti-racism education.

In the first phase of the campaign, the committee called on residents to submit videos of themselves answering questions about their thoughts on and experiences with racism, and what personal role they can play in ending it in Saskatoon. Williams was one of a few dozen culturally diverse volunteers to submit a video.

In June, the city rolled out phase two of the campaign, which involves ads spread out across the city in bus shelters, restaurants and bars, along with four billboard installations, featuring quotes from former volunteers. In Williams’ billboard, which shows his face, but not his name, his quote was boiled down to: “…I have to acknowledge my own privilege and racist attitudes.”

With those 10 words, Williams, a professor at Saskatchewan Polytechnic, ignited a firestorm on social media of folks jumping to defend themselves against what they took as an accusation. One Reddit user kicked off a debate on the platform, asking: “Why is the city of Saskatoon purchasing billboards simply to say white men have privilege?” To which someone else replied: “You then invite a series of people who hate men and are racist against whites to criticise your every word and action until they are satisfied by your subservience.” Another wanted to make it clear that: “I have not had one hand out due to being white I’ve worked my ass off to get where I am. All of my friends and family have worked their ass off to get where they are.” Ezra Levant’s the Rebel, went on to call the billboard itself racist, as did an alt-right British group called Western Defence, and a slew of other Twitter users.

In an email to Maclean’s, Williams said that, despite the backlash, “I’m proud to be part of the ‘I am the Bridge’ campaign. I chose my words carefully and I stand by them completely.”

The city is likewise defending the billboard, saying that it wasn’t meant to suggest all people are racist, but rather to encourage residents to consider how they can play a personal role in mitigating racism. “Certainly the level of feedback indicates that the campaign is doing its job,” said Saskatoon city councillor Hilary Gough, “which is to get people talking and thinking about racism and the reality of it in our community.”

Indeed, surveys and polls on racism in the province do suggest that race relations are tense and deteriorating in Saskatchewan. Last year, following the murder of Colten Boushie, a 22 year-old Indigenous man from the Red Pheasant First Nation in Saskatchewan, the NRG Research Group and Peak Communications conducted a survey on racist attitudes across the country. In Saskatchewan, 46 per cent of respondents—more than anywhere else in the country—said racism was a big problem. Meanwhile 30 per cent of respondents in the western Prairies (Saskatchewan and Alberta), said race relations in their communities have gotten worse over the last decade.

Of course, broaching the issue of racism often draws prickly reactions like those towards Williams’ billboard. “Certainly, I think there is some defensiveness in this,” she says. “It takes time to learn about one’s own privilege without feeling like we need to feel guilty.” Part of the backlash, though, comes from a mistinterpretation of the campaign, says Gough. “We aren’t saying that everybody is racist and has racist attitudes, but we are trying to create space for each of us to consider how we can most productively engage with the structures we’re living in and figure out what our role is in eliminating and addressing racism.”