The B.C. town that 'MacGyvered' its way into being ready for COVID-19 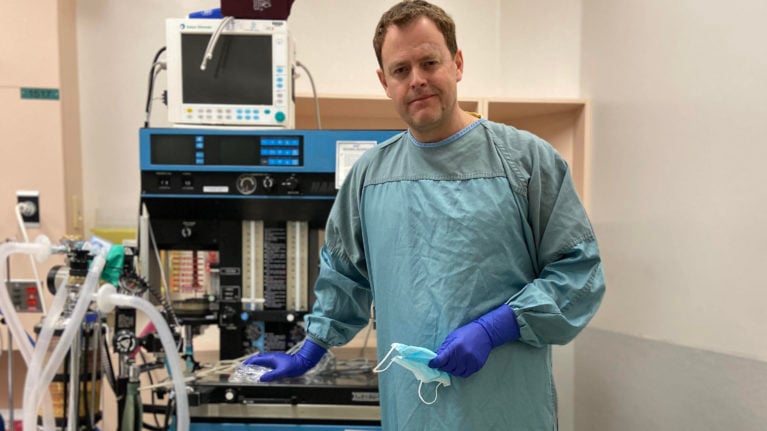 Dr Ivan Scrooby standing in front of an anesthetic machine that has a basic ventilator incorporated in the unit. (Photo courtesy of Dr. Scrooby)

Two months ago, the town of Williams Lake, nestled in the rugged interior of B.C., had three ventilators to serve a region of about 30,000 people. Today, it has seven, including six in a negative pressure isolation unit specially constructed to handle the coronavirus pandemic.

The leap from three to seven involves the derring-do of local physician Ivan Scrooby who scrambled to borrow and, as he says, “MacGyver” machines for patients who might need them in intensive care.

And the jury-rigged ventilators are just part of the story of how this tightly knit rural community of 11,000 rallied to meet COVID-19 head-on. There are also the shopping angels, the mask-makers and the league of on-call errand dashers.

“We always seem to pull together,” says Milo Macdonald, Williams Lake’s chief administrative officer and the town’s former chief of police, who at the end of April was also stickhandling historically high spring flood levels in the Williams Lake River Valley that have wiped out several bridges, ruptured a sewage pipe and imperilled a sewage lagoon. (Macdonald took his job in municipal administration because he was looking for something more sedate. It’s been anything but.)

Williams Lake has pulled together before. Three years ago, ferocious wildfires compelled the city’s residents to evacuate en masse. The trauma also forced them, once they returned home, to prepare for future emergencies. “We got the table set,” says Beth Veenkamp, the city’s economic development officer, whose grandfather arrived there from Alberta in the 1970s, drawn by the forestry industry.

By mid-March of this year, when the savagery of the pandemic’s course through Italy began to be apparent, Scrooby, a family physician who works as an anesthetist at Cariboo Memorial Hospital, realized his community needed to mobilize. “Everyone was looking for a ventilator,” he says. ”You had to be very quick to find one.”

RELATED: How prepared was Canada?

His first gambit was to repurpose a backup anesthetic machine stashed in the hospital’s recovery room to act as a ventilator. Then Scrooby scrounged two loaner anesthetic machines from a local dentist’s office where he occasionally works. Fearing even that would not be enough, he persuaded the dentist to lend yet another anesthetic machine from his dental office in Burnaby. And then Scrooby asked the husband of a colleague to make the 1,000-km-plus round-trip journey from Williams Lake to Burnaby to pick it up in a U-Haul.

Then came the McGyvering. The four anesthetic machines “were not intended for ICU (intensive-care unit) use,” says Scrooby, who arrived in Williams Lake 18 years ago from South Africa. “But that doesn’t mean you can’t find a way.”

He and a team of biomedical experts had to re-engineer each machine so that it would deliver only oxygenated air and not anesthetic gases as well. One of the three dentistry machines, which had never been used, was a new but discontinued model whose spare parts were hard to find. “[The hospital’s biomedical team] was able to resurrect it and replace some sensors that were faulty. And then we had to run a diagnostic to make sure it was working correctly,” Scrooby says.

RELATED: ‘I saw fleeting moments no one remembers’: One ER doctor’s photos from the coronavirus frontlines

The other two dentistry machines were older, and had tubing for nitrous oxide, more commonly known as laughing gas. Scrooby and his team had to cut that tubing off and retrofit the machines with parts that allowed tubes to connect to slots built into the hospital walls for medical air.

“In a Hail Mary situation like this you have to do crazy things,” Scrooby says, listing a raft of other modifications the team had to make.

At the same time, Scrooby was concerned about keeping potential COVID-19 patients isolated from others in the hospital. By chance, part of the hospital was under renovation after a disastrous snap deep-freeze in January burst some water pipes and caused a flood. What if the space could be converted into a negative-pressure unit, which allows viruses to be cleared out of a space within a prescribed time frame?

RELATED: Lives on the line

The new ward, called the Cariboo Respiratory Unit, opened in late March with space for 15 patients and six of the region’s seven ventilators. (One ventilator is set aside in the ICU for non-COVID-19 emergencies.)

“It was an undertaking that had a very steep learning curve for me,” says Scrooby. “It means an awful lot when I think of all the community members and contractors who came together to make this a reality.”

The community-mindedness didn’t stop there. The city ponied up for the purchase of four iPads so potential isolated patients could have contact with loved one. Locally sewn masks are in evidence everywhere. People have started gardens to grow food for those who need it.

As of May 11, the modified ventilators have not been pressed into use. In fact, as the province begins to lift restrictions, including allowing elective surgeries to resume, Scrooby plans to move the ventilators into storage. But they will be standing by in case a surge in COVID-19 cases ever does wallop the town.