The Battle of Jutland: chaotic, bloody and a mass of ironies

The naval Battle of Jutland in 1916, the hinge year of the Great War, upended neutrals around the world 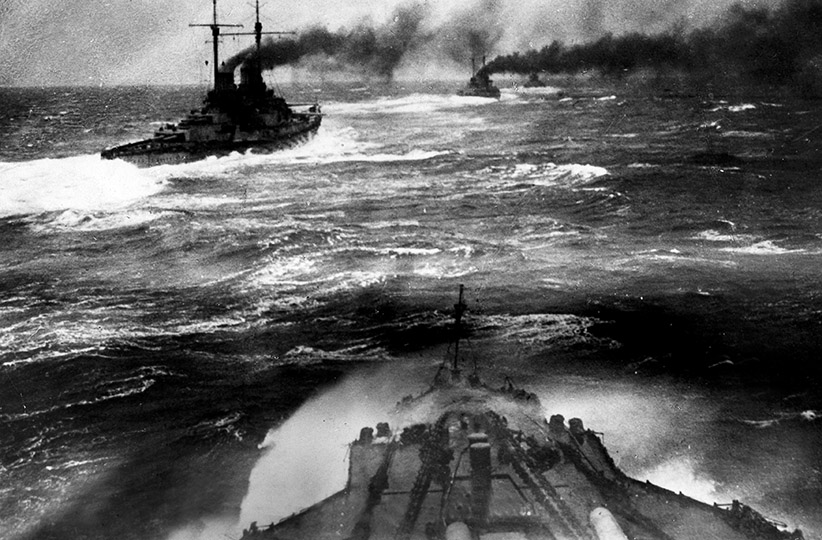 Given that there was only one major naval battle in the whole of the Great War, Irish historian Keith Jeffery was bound to use May in 1916: A Global History, his month-by-month account of the First World War’s hinge year, to discuss the war at sea. (Monthly updates here.) The Battle of Jutland, a 12-hour affair fought between Britain’s Grand Fleet and Germany’s High Seas Fleet in the North Sea off the west coast of Denmark on May 31 and June 1, was chaotic, bloody and a mass of ironies. What can fairly be described as the last 19th-century sea battle—Nelson would have instinctively recognized the tactics—has tended to mask the revolution going on elsewhere in naval warfare. And also to mask the fact the war at sea was no sideshow to the larger conflict: if the titanic land battles transformed the belligerents, the war at sea upended neutrals around the world.

Winston Churchill famously called Admiral of the Fleet Sir John Jellicoe, “the only man on either side who could lose the war in an afternoon.” Churchill, Jeffery notes, was prone to personalize such matters, being a proponent of the “Great Man” theory of history—and later, in the eyes of his own admirers, the very embodiment of it—but the remark was not much of an exaggeration. For the British and, to a slightly lesser extent, the Germans, the war at sea was almost too high-stakes to fight at all. Both sides were frightened by what serious losses, especially among the dreadnought-class vessels—the most expensive and technologically advanced war machines yet known—might mean to control of the seas and, especially, civilian food supplies.

But the Germans, with less to lose—the British blockade was strangling them—and, by early 1916, under the more aggressive leadership of Admiral Reinhard Scheer, acted to draw out the Grand Fleet. The battle raged from late afternoon through most of the night, until Scheer managed to evade Jellicoe and get his battered fleet back to port. Both sides claimed victory, and both were right—and wrong. The Germans won the tactical engagement, sinking twice as much British tonnage as they lost, while suffering less than half the casualties, 2,500 dead to 6,000 British sailors. But Britain won the strategic battle. The Royal Navy remained in command of the North Sea and still maintained numerical superiority; even at a 2:1 advantage in losses, the Germans would run out of ships before their enemies did. Aside from three abortive and quickly reversed attempts to break out, the Germans remained in port for the rest of the war.

From the perspective of 100 years, though, Jutland—the last time surface titans engaged in naval combat without the deployment of submarines and/or aircraft—was simply a bloody anachronism in which winning and losing was irrelevant. By the Second World War battleships were minor players, while subs and aircraft carriers had become the dominant offensive weapons. The latter had no role in the Great War, but subs became its iconic naval vessel.

With no other option after their surface ships were trapped in port, the Germans turned to ever-increasing “unrestricted” submarine warfare, which eventually brought the United States into the conflict. Sea war became overwhelmingly economic war, with collateral casualties stretching around the world. In 1913, 20 per cent of the Dominican Republic’s exports went to Germany; by 1916 the figure was zero. Chile’s nitrates exports were devastated, as were Brazil’s coffee sales and Spanish agricultural exports. Postwar economic chaos and revolutionary upheaval was by no means restricted to the belligerents.

There was one final irony to Jutland, one an Irish historian could not let pass. Britain awarded four Victoria Crosses for gallantry during the battle, three to men who died in it and the last to Capt. Barry Bingham, whose ship, HMS Nestor, was sunk. (He was rescued by the Germans and spent the rest of the war as a POW.) After the war, Bingham’s birthplace in Northern Ireland was allotted a captured German naval gun to commemorate the medal. By chance it came from U-19, the very sub that had brought Sir Roger Casement to Ireland before the Easter Rising. That means a single gun in Loyalist Ulster symbolizes both heroic service in the Royal Navy and Irish republicans’ drive for independence from Britain.