Anne Kingston: There has yet to be a #MeToo equivalent for the largely private crime of family violence 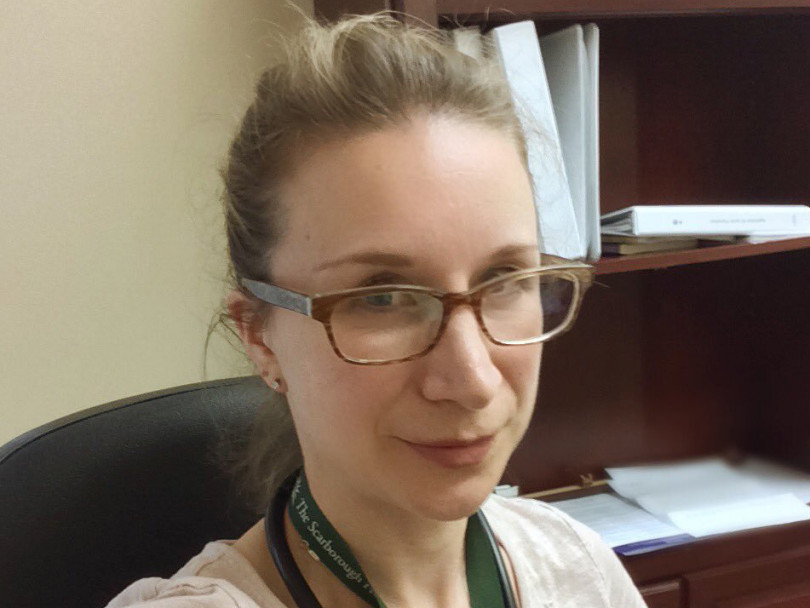 Elana Fric Shamji’s tweet from 24 Feb 2016: #PinkShirtDay stand up against #bullying and stand up for #kindness. (@ElanaFricShamji/Twitter)

We will never know the horrific final abuse Dr. Elana Fric endured from her husband of 12 years, Dr. Mohammed Shamji. The 40-year-old family physician and mother of three was beaten and choked to death in December 2016, days after she served Shamji with divorce papers, a harrowing reminder that the most dangerous time for a victim of intimate-partner violence is when they leave a relationship or just after. Her body was found by Toronto’s Humber River, stuffed into a suitcase. Last week, Shamji, a neurosurgeon, pleaded guilty to second-degree murder on the eve of his trial; initially he pleaded “not guilty” to charges of first-degree murder and committing an indignity to human remains. A summary of facts before the court included Fric reporting Shamji’s verbal, emotional and physical abuse to friends. Shamji repeatedly sexually assaulted her, she said, and once choked her to the point she passed out.

That is the reality. Yet photographs of the couple, culled from their Facebook and Instagram accounts to illustrate media stories present a union that appeared idyllic, relentlessly happy, even enviable: they’re smiling for the camera, hugging affectionately on beach holidays, pictured with their young children. We know now it was a faux show, a curated fiction. Fric said so herself via prior statements read at Shamji’s preliminary hearing. Her husband controlled her social media accounts, she told a friend. “Don’t believe what you see on Facebook,” she is quoted, calling it “Fakebook.”

Fric’s life, and media coverage of her murder, reveal volumes about societal attitudes  and biases involving intimate-partner violence—as well as education. With her death, the physician becomes a high-profile statistic in an undeclared national emergency: one of the women or girls killed every 2.5 days in Canada, on average, over the past four years. That’s the shocking finding of #CallitFemicide, a January 2019 report by the University of Guelph-based Canadian Femicide Observatory for Justice and Accountability. Two-thirds of these women and girls are murdered by intimate partners or male relatives, researchers found; 91 per cent of the accused perpetrators are male; and 11 per cent of the accused, all male, commit suicide. The research echoes a 2018 finding by the United Nations that the home remains the most dangerous place for a girl or woman.

This year has offered a tragic parade of reminders. In February, 11-year-old Riya Rajkumar of Brampton, Ont. was killed by her father, Roopesh Rajkumar. In March, Trent Butt of Carbonear, Nfld. was convicted of first-degree murder of his five-year-old daughter, Quinn, found dead after a house fire in 2016; the Crown argued his motive was vengeance against his estranged wife. Children are unacknowledged casualties of intimate-partner violence, which rightly should be called “family violence” to convey its impact. Shamji’s plea bargain spared his 14-year-old daughter from having to testify for the Crown about hearing her parents fighting on the night of her mother’s death.

There has yet to be a #MeToo equivalent for the largely private crime of family violence. That leaves it to others, including media, to train a spotlight on the reality. A first step would be to stop illustrating stories involving charges of intimate-partner violence with “Fakebook,” or upbeat, heart-warming imagery of the accused and victim, seen in coverage of Fric’s death. It’s a media reflex to want the wedding pic. But showing couples in what could be staged happy moments mitigates the reality of violence and inadvertently creates sympathy and bias for the accused. These stories often are mistakenly framed as a “love story” gone tragically wrong or a crime of “passion,” a perception hard-wired into the legal system, according to a 2015 study that found that men who kill their wives, girlfriends or family members receive shorter sentences than men who kill strangers. Its author, Myrna Dawson, a professor at the University of Guelph and Director of the Centre for the Study of Social and Legal Responses to Violence (CSSLRV), refers to this as the “intimacy discount,” and notes it contains vestiges of the days when women were men’s legal property.

Coverage of Fric’s murder bristled with class and gender bias, beginning with the fact it received such widespread attention due to the couple’s respected professions. Stories often focused on Samji’s accomplishments, rather than his violent crime, contrary to advice laid out in  “Use The Right Words,”  a guide for journalists covering sexual violence. Fric’s life and success as a beloved family practitioner and Ontario Medical Association delegate were often eclipsed by repeated mention of  Shamji’s “elite” education, his reputation as a “brilliant surgeon,”  the fact his father is also an acclaimed surgeon.

Class bias was evident as well in the surprise expressed that educated professionals can abuse and be abused: “Doctor’s death shows no one is immune from domestic violence” one headline read. Yet history reveals that intimate-partner violence, which is about exerting control and power,  exists in every socio-economic strata. High-profile cases date back decades—Hedda Nussbaum in the 1980s, Nicole Brown Simpson in the ‘90s, and, more recently, Rihanna, Nigella Lawson and Reeva Steenkamp.

Still, there’s reluctance to accept that accomplished, financially independent women like Fric can be caught in an abusive, controlling relationship. Research is relatively new into “affluent abuse” or “upscale abuse,” terms coined by Chicago psychologist Susan Weitzman in her 2000 book, Not to People Like Us: Hidden Abuse in Upscale Marriage. The title reflects the classist myth that intimate-partner violence occurs only amongst the uneducated and poor, not amongst “people like us.” Fric shared that perception, according to court documents:“I don’t understand how this could happen. I’m so smart, I’m a doctor,” she told her lawyer. A 2017 Toronto Life feature, “Love and Death,” which chronicled Shamji’s abuse through the relationship, offered some clues:  in the beginning, Fric felt “unworthy of his love” yet she also tried to break it off twice in the first year; Shamji talked her out of it. His constant belittlement fed Fric’s belief “she was nothing” compared to her husband. She stayed because she hoped it would get better, because she was afraid, to keep the family together. Finally, she realized she had to leave for her kids.

According to the Toronto Life piece, Fric withheld details from family and friends, including a serious assault by her husband in October 2016 that she relayed to her lawyer. They saw red flags but didn’t want to intervene—or saw it as a private matter. Her parents came upon the couple squabbling when they were dating, with Elena crying; they chalked up to “a harmless lovers’ quarrel.” Years, later they overheard Shamji screaming: “You fucking bitch! You stupid fucking bitch!” at their daughter. They’d come to her side in 2005 after he attacked her and she called police. 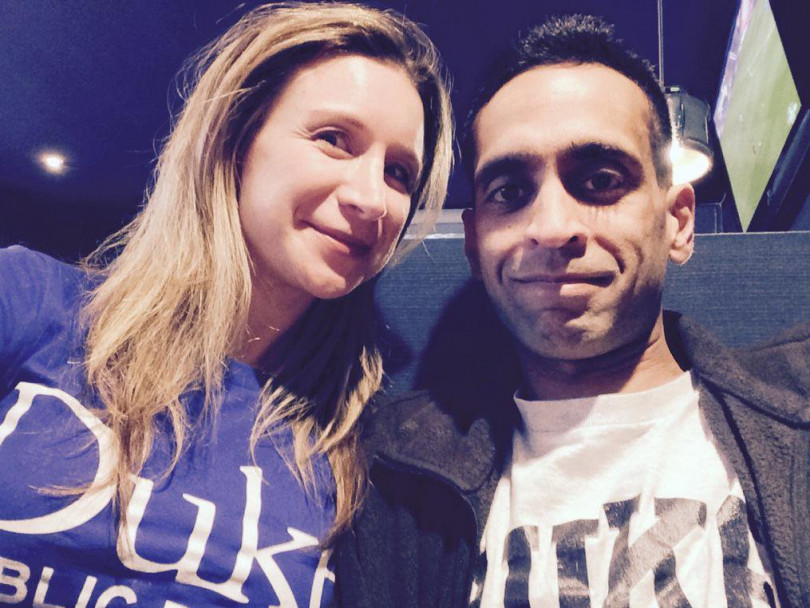 Photos Elana Fric posted to Twitter of her and her husband, like the one above,  veiled the violence within their marriage. She later said Shamjo controlled her social media accounts.  (@ElanaFricShamji/Twitter)

Reluctance to acknowledge affluent abuse also stems from a refusal to see successful people as vulnerable to marital power dynamics, a point noted in Toronto Life: “[Fric’s] family and friends couldn’t understand why she had gone back to him. She was smart, educated, financially independent and surrounded by a devoted support network. She didn’t need him.” Again, societal bias. We don’t associate risk or vulnerability with privileged populations. That in turn has created a gap in services and supports for affluent women, as revealed by research from Calgary’s Sagesse, a centre offering supports to those who experience intimate-partner violence. Research into “affluent abuse” notes unique pressures that prevent people from coming forward or leaving— fear of not being believed if the accused is pillar of the community, say a respected doctor; fear of reputation damage; fear that the children will be affected; fear of shattering a carefully constructed façade. In pre-trial submissions, it was revealed Fric feared her husband would exert his influence and connections: “if I apply for divorce he will try to destroy me,” she told a friend. Affluent abuse also often includes financial control and technological surveillance. A woman worth millions on paper may have no access to family accounts—or is kept in the dark about finances. Tellingly, Toronto Life notes a demand Fric made of Shamji in late 2016 was for full financial disclosure.

Privilege can provide cover; it also means reflexively receiving the benefit of the doubt. In 2005, shortly after the birth of their first child, police charged Shamji with assault of Fric and two counts of uttering threats of bodily harm. To avoid a criminal record, which would have ruined his promising career, the charges were withdrawn; he entered into a peace bond with 12 months of probation.

Shamji’s sentencing hearing, which begins May 8, is destined to garner big media coverage. Meanwhile Riya Rajkumar’s death and any lessons it might contain have been forgotten. Even at the time of her murder, media discussion focused on public outcry to the Amber Alert issued in the case, not the more complex dynamics of family violence. After her father died of a self-inflicted gunshot wound, the first-degree murder charge against him was withdrawn and the matter dropped, a move that spurred criticism from intimate-partner violence experts. A public review was needed to answer questions that could shed insight, they argued. What was his motive? How did he obtain a gun? Was police response adequate? And what role did Roopesh Rajkumar’s history of reported domestic abuse play? Court documents show he faced three previous assault charges that didn’t result in criminal convictions; two, in 2004 and 2008, were cases of reported domestic assault against a family member or partner.

We can’t expect interest from Ontario’s Conservative government. Last October, it disbanded a non-partisan expert panel to end violence against women convened in 2015 under the former Liberal government that was studying intimate-partner violence. Small progress was made last year with the federal government’s tabling Criminal Code reforms that will broaden and strengthen the courts’ definition and treatment of the small percentage of intimate-partner violence cases that make it to the courts. For one, “intimate partner” would replace “spouse” and “common-law partner” and be expanded to include past partners. New definitions would see strangulation classified as “elevated assault” alongside assault with a weapon, and repeat offenders would face a higher threshold for bail as well as increased sentences. Bail courts now put a reverse onus on repeat abusers to prove why they should be released − rather than on the Crown to make a case for keeping them locked up.

Such reverse onus needs to be practiced culturally as well. Instead of “Why did she (or he) stay?,” the question should be “Why did he (or she) abuse?” Change won’t come without an attitude shift and pressure put on systems. For one, we need to ask why Provincial Domestic Abuse Death Review Committees formed to investigate intimate-partner deaths, a process shrouded in secrecy, don’t always do their jobs. That charge was made by the family of Cathy Bawn of St. John, NB who was shot dead while sleeping in 2015 by her common-law partner, who killed himself. Was Bawn’s death not worthy of investigation because she was a gas station attendant, and not a doctor? No one saw the signs that her mother was in an abusive relationship, Bawn’s daughter told the CBC: “It’s just something that we don’t talk about.” How many deaths will it take until we do?