The Cambridges vs. the Trudeaus: Who did it better?

Rating the royals vs. the Trudeaus in public waving, paddling and overall cuteness

Both families are young, photogenic and stylish. So in a completely unscientific head-to-head competition, who wins: the families of Prince William and Kate, duchess of Cambridge, or Prime Minister Justin Trudeau and Sophie Grégoire Trudeau? Maclean’s compares the families using pictures of the royals taken from the just-completed visit to British Columbia and the Yukon. And yes, their children get in on the rankings (at least in one category.) 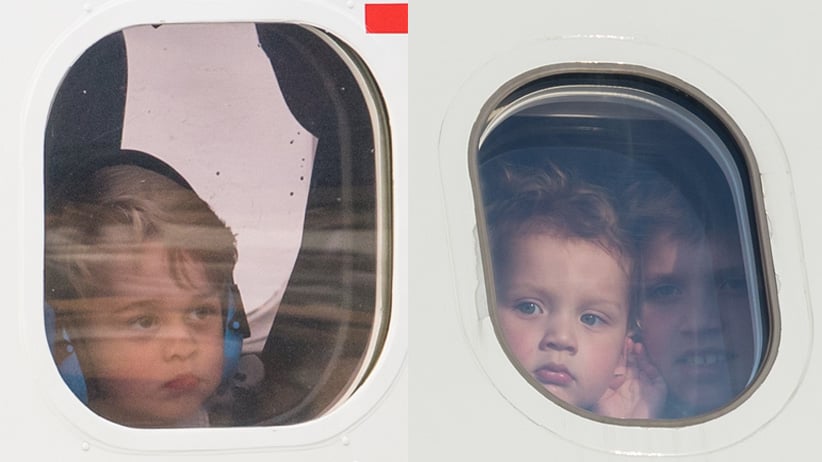 Left: Prince George looks out of the window of a float plane as he departs from Victoria Harbour Airport in Victoria, Canada, on the eighth day of the Royal Tour to Canada. (Dominic Lipinski/Press Association) Right: Xavier and Hadrien look out of RCAF01 on arrival to Andrews Air Force Base in Washington. March 9, 2016. (Adam Scotti/PMO)

Prince George peering out the window of a float plane at the end of the royal visit to British Columbia and the Yukon takes on Hadrien Trudeau (with brother Xavier behind him) looking out of the government plane in Washington, D.C.

Both have the adorably round-eyed expressions seen in children fascinated by all things aviation. While Hadrien gets a boost from his big brother, Prince George has those big noise-cancelling headphones and that intense visage. 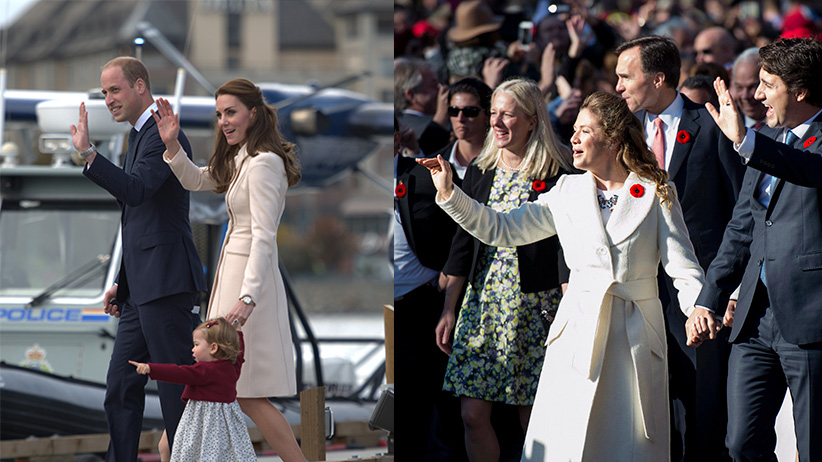 Left: Prince William, Duke of Cambridge, and Catherine, the Duchess of Cambridge, wth their children George and Charlotte depart on a floatplane from Victoria, British Columbia on October 1, 2016. (Christopher Morris) Right: Prime Minister-designate Justin Trudeau, his wife Sophie Gregoire-Trudeau and the Members of Parliament who will comprise his cabinet arrive at Rideau Hall in Ottawa on Wednesday, Nov. 4, 2015. (Justin Tang/CP)

It’s Kate and William at the end of their royal visit vs. Sophie and Justin at the swearing-in of his cabinet. First, ignore the cherubic royal toddler holding hands with mum; including the adorable waving, pointing Princess Charlotte in any contest involving mere adults would automatically tilt it in her parents’ favour.)

Both couples are wearing power colours—dark blue for the men and stark white for women. Both Sophie and Kate have similar “half-up, half down” hair styles. Each is wearing leg-lengthening nude pumps. Most importantly, each couple is waving in unison.

While the Trudeaus’ waves are casual and energetic (Sophie clearly recognizes someone in the crowd), the Cambridges’ gestures are coolly elegant. They also echo the Queen’s own wave, designed for maximum effect with minimum effort. Waving is hard work; a little goes a long way. 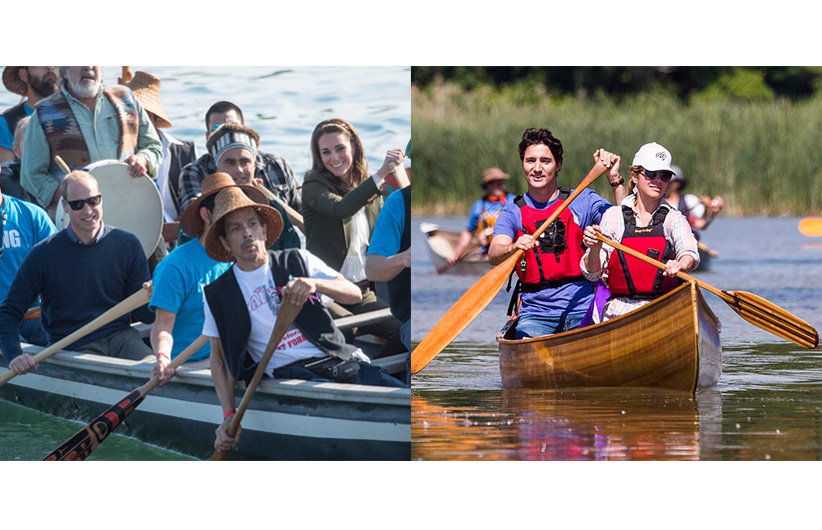 Left: The Duke and Duchess of Cambridge make their way by canoe to Haida Heritage Centre and Museum at Kaay Llnagaay on the island of Haida Gwaii, British Columbia where they received a First Nations welcome during the Royal Tour of Canada. (Arthur Edwards/The Sun) Right: Prime Minister Justin Trudeau, his wife, Sophie Gregoire Trudeau, and his daughter Ella Grace Trudeau, hidden, paddle in a canoe during the “Paddle The Rouge” event at Rouge Beach Park in Toronto, Saturday June 18, 2016. (Mark Blinch/CP)

The comparisons aren’t exactly precise. William and Kate are in a large Haida canoe on the Pacific Ocean with a dozen or so other paddlers. Justin and Sophie are in a cedar-strip canoe on the Rouge River in Toronto. But heck, they are paddling in the most iconic of Canadian modes of transport. So here goes: Canoeing can be both awkward—often you kneel, with your bum perched on a seat for balance—so comfortable, loose clothes are a must. Sophie and Justin are wearing typical Canadian gear, chosen not to chafe or irritate. But William and Kate are wearing rather formal outfits for such exercise, with Kate in a form-fitting blazer and William in yet another blue sweater. (How many blue sweaters does that prince own?)

Also, let’s talk paddling skills. While William and Kate hold their paddles correctly, videos of their effort show them to be skilled amateurs at best. In contrast, Justin is a pro (his father was famous for his canoeing skills) and Sophie is comfortable in the front seat. Also, they are wearing life jackets.