Ian Williams: 'Dear cell phone companies,' There are software issues with your phones that I won’t get into. My date and time function is frozen in the 18th century. 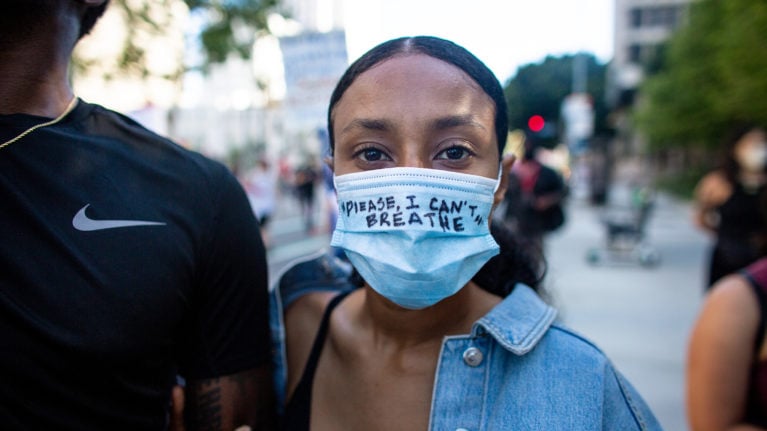 Protests across the U.S. began in May and continued into June: a protester in Los Angeles on May 27 (Jason Armond /Los Angeles Times/Getty Images)

Something seems to be wrong with the cameras on your phones. They’re recording double exposures. When Black people look, we see a white officer shooting a Black man five times in the back (Walter Scott), or pummelling a man for jaywalking (Nania Cain), or killing a man in front of his apartment building (Keith Lamont Scott), or choking a man then pressing his head into the sidewalk until he can’t breathe (Eric Garner).

That last scene, only with the white officer’s knee on the Black man’s neck, was recorded again recently (George Floyd), but we can’t keep recording on these defective cameras. These recordings eat up battery and Black people. And when we show the videos to white folks, they don’t see anything. The only explanation I have is that there’s some kind of filter on your camera that’s making Black people invisible.

As a result, some of us are trying to become visible by gathering in groups. Make yourself large when attacked by a bear, right? We gather and adjust the lighting by setting places on fire. Your cameras are better at capturing these moments. Yet, in the playback, we’re backlit by the past, and the more the file is shared, the more compressed it becomes until all that most Americans see is high-contrast black and white. What is corrupting our files?

Your devices also have a problem with the focus. A police officer murders a Black man, but the focus is on race riots. Even on the social media apps I download, the subject keeps changing from #blacklives to #alllives.

Evidence. We have so much evidence, our phones are out of storage. Evidence has been repeatedly controverted by white America. I got a news notification: George Floyd’s—I can’t breathe—autopsy report claims that he did not die from traumatic asphyxia but, in part, from his own underlying health conditions. Again I watched the video on my phone. The cop is kneeling on his neck. I don’t get it; is the news app buggy?

Somehow your phones work well for white women who call the police on Black people as we birdwatch (Amy Cooper), sell water (Alison Ettel a.k.a. Permit Patty), barbecue (Jennifer Schulte a.k.a. BBQ Becky), and nap at Yale (Sarah Braasch). I can’t tell what brand of phone they’re using to make them sound so convincing.

Although I no longer live in America, sometimes I think a white woman will call the police on me for entering my own vehicle if I linger too long outside, searching for keys. She’ll think I’m carjacking my absent white self. When I go running (Ahmaud Arbery) at a nearby track, I leave my backpack on a bench. When I retrieve it, I worry that people will think I’m stealing my own backpack so I always open it immediately and confidently, and sip water to prove that it’s mine. According to a poster taped to a tree, a backpack was stolen recently. Everyone’s on high alert. I’ve never seen another Black person at that park. You know what that means.

There are software issues with your phones that I won’t get into. My date and time function is frozen in the 18th century. My location tracker positions me crossing the Atlantic Ocean. The system updates to this point have failed to fix your devices. What you really need is a totally new operating system.

Ian Williams is the author of the novel Reproduction, winner of the 2019 Scotiabank Giller Prize.