The case for broken bones

Charlie Gillis: Parents face tough decisions when it comes to their kids' safety. Letting them wander away from watchful eyes can pose a risk—but a risk worth taking. 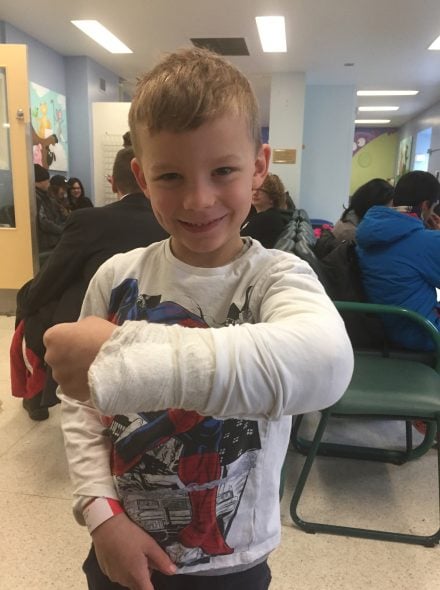 Cameron, shortly after crying out to the heavens: ‘Why did this have to happen to me?’. (Judy Gillis)

I barely heard my cellphone ringing over the wails of my six-year-old. It was a spring night at SickKids hospital in Toronto, and my son, Cameron, lay with his swollen arm propped on the rail of an emergency-room gurney. He’d fallen from a set of monkey bars during a class visit to a city park, and the damage wasn’t minor: he’d need immediate surgery to wire together his shattered left elbow. It would be several months before he regained full use of his arm.

How this happened wasn’t clear. Our kid couldn’t explain it—he was too busy crying—and evidently none of the teachers on the trip had been watching when he fell. Which might explain the discernible apprehension in the voice of his school principal, who’d wasted no time in tracking down my number. “Sooo,” he started solicitously, ignoring the sobs in the background, “I hear, um, Cameron took a fall?”

From Today’s Parent: This new urban adventure camp will teach kids how to navigate the big city

The principal had cause to worry beyond his no-doubt-genuine concern for one of his students. The cost of staff inattention in such situations has been well-established by the courts, dating back to the late 1950s, when a Toronto student fell on some ice in the schoolyard and received $10,000 in damages. Over the decades, the stakes have gone up: in 2009, a 13-year-old student in B.C. was awarded more than $1 million after being concussed in a field hockey game. But there was something about this moment—and the unasked question hanging in the air—that bothered me. So, to the approving nods of my wife, I cut to the chase. “We’re not going to pursue legal action or raise a stink with the board,” I said. “Anyone who’s seen this kid playing would know he had a broken arm in his near future.”

“That,” said the principal, “strikes me as a pretty healthy outlook.”

It’s one I had long held without giving it much thought, believing the risk that comes with unsupervised time teaches kids independence and resilience (wasn’t that how my parents raised me?). But there’s nothing like the cries of a child in pain to clarify the mind, and what we endured that night was enough to challenge old assumptions. I thought about the laissez-faire child rearing we hear about from our parents and grandparents, realizing it was more often as not born of necessity. A greater proportion of the population lived in rural areas, where kids roamed out of sight; families were bigger, making it hard for parents (usually mothers) to keep an eye on all their kids. The idea that our forebears enjoyed some form of preternatural enlightenment in parenting suddenly seemed absurd.

Today, letting one’s kids play away from watchful adult eyes is to consciously act on a philosophy—one that conflicts with most parents’ fundamental instincts. My daughter and son seldom seem so wholly kids as on the afternoons they spend playing hide-and-seek, riding bikes or shooting hockey balls in the alley behind our house. But their mother and I know this only from the peeks we steal when we succumb to our fear of broken glass or inattentive drivers.

So Cameron’s close call became a test of our resolve, because it spelled out the implications of averting our gaze: What if he’d suffered lasting head trauma? Or a spinal injury? How “enlightened” would hands-off parenting seem then? Ultimately, though, we’ve stuck to our approach—despite our son’s accident and because of it. I’ll forgo the homilies about “freedom to discover” and “trial-and-error learning” to recall the scene that night at the ER: Cameron lay surrounded by his parents, his sister and sundry medical staff, at one point receiving a call of encouragement from his grandmother in Edmonton. He was, in short, suffused with more love and care than an injured six-year-old could process. Yet even that had failed to preserve him from life’s random cruelties. This was his moment of revelation. At one point, casting his good arm skyward, he cried out, as if to the heavens: “Why did this have to happen to me?”

You got me, kid. But happen it must, and built into that is a truth darker than you’ll know for decades. Before writing this, I leafed through the detailed statistics the B.C. Coroners Service keeps on child fatalities in that province. Deaths from injury, it turns out, are rare. In 2014 and 2015, almost all of the 30 fatal injuries to B.C. children aged five to 14 resulted from car accidents or fires. But there was one drowning, and I shudder to imagine being the parent in such a situation, wondering whether a policy of constant vigilance might have forestalled tragedy.

That is an impossible standard, and it serves neither ourselves nor our children to pretend we can meet it. So, with a knock on wood, I choose risk. I didn’t file a civil suit. I don’t support denuding playgrounds of perilous slides and creaky merry-go-rounds. And, apparently, I’m not alone. Having ordered X-rays and heard Cammy’s garbled account of his tumble, our ER resident that night nodded his head sagely. “Ah, the monkey bars,” he said, giving Cameron a lighthearted wink. “They keep us in business.”