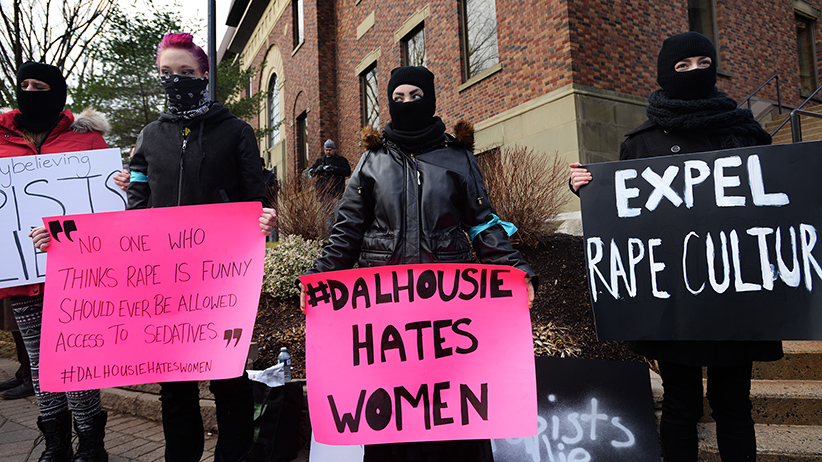 Dalhousie University, my alma mater, is a sleepy mid-sized school where nobody would fault you for wearing pyjamas to class; it is situated in a sleepy, mid-sized city (Halifax) where jaywalking is encouraged by drivers who stop their cars in the middle of the road long before pedestrians even indicate they’d like to cross. In other words, Dal is a pretty relaxing place to matriculate—especially, it appears, if you are a woman-hating dentistry student. The university seems to have taken the Maritime region’s peaceable, deferential attitude to perverse new heights: School president Richard Florizone announced he would not suspend or expel outright the 13 male dentistry students who created a wildly misogynistic Facebook group that extolled the virtues of chloroform-enabled rape, but would resolve the issue through “restorative justice.” In other words, punishments will be doled out in-house, with the input of those harmed—namely, female dentistry students openly disparaged in the Facebook group. This decision did not please Dal faculty: In late December, 150 faculty members at the school signed a petition calling for an independent review of the Facebook-group incident.

The group, Class of DDS 2015 Gentlemen, deleted shortly after an anonymous source alerted the press to its existence, was a mecca of juvenile, hateful material. It was not, as many of its defenders claim, home to harmless, sexist jokes of the “make me a sandwich” variety. In addition to a quiz about female dentistry students entitled “Who would you hate-f–k?” (sadder still is that these geniuses had to borrow their sexist barbs from Jian Ghomeshi), the group’s content included explicit jokes about sedating women for sexual purposes. In one post, a photo of a man holding a rag up to a woman’s face was accompanied by the caption: “Does this rag smell like chloroform to you?” To add insult to injury, the group’s creators also exhibited a very poor understanding of human biology. In the now-deleted words of one member: “Penis . . . The tool used to wean and convert lesbians and virgins into useful, productive members of society.” In short, the so-called dentistry gentlemen not only implicated themselves as deviant pricks, but as unprofessional, irresponsible dolts. This isn’t a case of “rape culture.” It is one of malpractice.

Yet the school has decided to handle the issue behind closed doors with the promise, says Florizone, that the process will be “victim-centred.” In Florizone’s defence, Gerald Hashey, a senior manager with the Nova Scotia Human Rights Commission, told the CBC, “The restorative approach is the best way to ensure that community interest, public interest and the interests of the female students are kept at the heart of the issue.”

A restorative approach to justice in this case may benefit the victims—if, of course, the victims wish to resolve the issue as quickly as possible without fear of being named, even at the expense of the “gentlemen” getting off scot-free (and let’s face it, scot-free in this case means any punishment short of expulsion). But the suggestion that restorative justice will benefit the community and the public at large is a sick joke. For starters, dentistry school is not a community. It is a professional school: a launching pad into the world—which was a public place, the last time I checked. And the public will not benefit from a closed-door approach to rape jokes made by aspiring dentists. Something tells me the guys responsible for this Facebook group might have a thing or two in common with the doctor who allegedly took a selfie with an incapacitated Joan Rivers minutes before her death. In other words, the sooner we know their names, the better.

After all, according to Dal’s faculty of dentistry website, the school and its students have been “providing public dental care for over 100 years.” The students, no doubt, were among those to “provide care for approximately 10,000 patients a year . . . at a reduced rate,” as the website reports. Natasha Legay, a 19-year-old student at Halifax’s Mount Saint Vincent University, is one of those patients. She can’t afford to go to a professional dentist and is very uncomfortable with the possibility that one of the guys in the Facebook group might have worked on her teeth in the past—or might in the future. “I was hoping the students would be suspended, just for my peace of mind,” she says. Her peace of mind doesn’t appear to be of great concern to an administration more interested in covering up a scandal than laying it bare. Rather than suspend or expel the students responsible, Dal dentistry has chosen to temporarily close its public clinic until Jan. 12, indirectly punishing the low-income people who rely on its services, for the bad behaviour of 13 students.

Considering that morals don’t seem to be my alma mater’s cup of tea, there is another, equally compelling reason for Dalhousie to expel the dentistry “gentlemen.” The members of the Facebook group, presumably, reared and educated in the digital age, thought it was prudent to attach their names to their posts about sexually assaulting their classmates. Moreover, they also thought it was prudent to include the name of their program in the title of their rape-joke club. So, Dalhousie, as a once-proud member of your institution, I plead with you: If you don’t expel these losers because they are a threat to public safety, expel them because they are too stupid to graduate.

FILED UNDER: Dalhousie University Emma Teitel condemns the misogyny at her alma mater