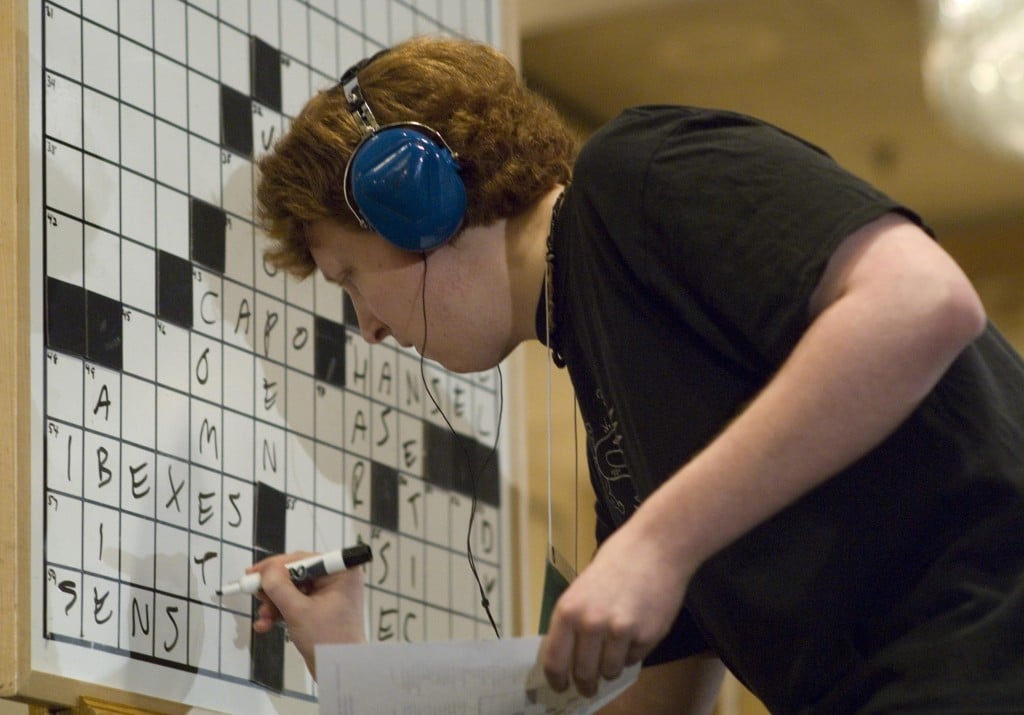 Modern newspaper crosswords arrived on the scene 100 years ago—more or less, that is, since there’s always a degree of sloppiness in the world’s favourite wordplay activity. Born in America at Christmas in 1913 in the New York World, and perfected in Britain some decades later—by which I mean polished into their only pure form, the cryptic—crosswords are now ubiquitous. The centennial spawned Alan Connor’s wonderful book, which bears the properly cryptic title of Two Girls, One On Each Knee (7) in Britain, and the far more prosaic The Crossword Century in its recently released version for North America, where cryptics have never really caught on. In an otherwise favourable Washington Post review, the erudite Jonathan Yardley takes umbrage at Connor’s assertion that “anyone can solve a British cryptic puzzle, if only she or he will just try. Believe me, I have tried, and I can’t, and I won’t try again. Life is too short.”

Oh, really? Just consider the British title: two girls’ names (Pat + Ella) combine to provide a seven-letter name for a bone found on all knees. Patella and only patella suffices to satisfy the clue (two girls), the answer-in-other-words (on each knee) and the length (7). Contrast that to a low-difficulty North American puzzle asking for “an Asian river” or even a New York Times-level “controversial thing to play,” which turned out to be “race card.” In either case, the possible answers are theoretically wide open, while a cryptic offers a closed loop.

Not surprisingly, Connor’s transatlantic edition has, in addition to a new title, “less information on how crosswords have filtered into popular culture,” he says in an interview, meaning less discussion of the fictional Inspector Morse taking crime-solving inspiration from particularly difficult cryptic clues, or even of how the Queen sits down, every morning she can, to kippers and the Telegraph crossword. Although nothing—not even the fact that almost 15 million Britons do battle with them on at least a weekly basis—shows the centrality of crosswords in the U.K. like the mere existence of Connor’s Guardian column about them. A weekly discussion of all things crosswordy, including the best recent clues, is an unheard-of use of newspaper real estate in North America.

Knowing how entertaining crossword arcana are, let us draw a decent veil over the hamstrung local book and focus on Connor’s British version. One of the author’s best tales concerns the last edition of the News of the World, killed by the phone-hacking scandal.

Rebekah Brooks, News International’s chief executive officer, was perfectly aware that disgruntled journalists have been known to leave expletive-laced commentary in their articles on their last day on the job. So she had two senior colleagues comb the copy, but they failed to notice crossword clues that included “catastrophe,” “criminal enterprise” and, best of all, “woman stares wildly at calamity.” “There’s poetic justice in that,” says Connor. “In Britain, crossword compilers are almost as well-known as a paper’s top columnists, even if they’re paid about one per cent of what the columnists are. It might be wise to pay attention to them.”

Until an American, Margaret Farrar, established the principle of symmetry—turn a puzzle upside down and it will look the same—the grids were literally all over the map, making life easier for compilers and harder for solvers. But it was Britons who firmed up the rest of the conventions. Anagrams are signalled (usually—remember the more-or-less rule) by language signifying upheaval; confused, upset, even drunken. “Male injured too, unfortunately, in play” (5,3,6) should point a solver along the road to realizing that the first three words rearranged yield Romeo and Juliet. Sometimes anagrams are partly hidden, though; a drunken sailor may start as the word or syllable “tar” and end up as a “rat.”

Like tar, puzzles everywhere are still stuck with what Connor calls “crossword words,” words that don’t exactly pop up frequently in everyday conversation. (If at all: Crossword compilers are the last English speakers to call sailors “tars.”) Emu, answering a common need for a three-letter grid-linking word with an inconvenient last character, is the classic example. (P.G. Wodehouse, who constantly mocked his inability to handle cryptics, used to plead with newspaper editors for more emus.) Double definitions take advantage of English’s habit of using the same spelling for different things, like a polite bow and an archer’s bow. Sometimes a double isn’t enough for a compiler: Target vessel and ram end (4) provides a quadruple: three nouns and a verb, all satisfactorily answered by “butt.” Direction clues may indicate that reading backward or upside down is called for. Proper nouns, common initials or well-known acronyms may rightly inspire suspicion—a Canadian clue mentioning hockey might require the letters “n”, “h” and “l” to solve. A thorough knowledge of Roman numerals and tennis scoring is advised. Question marks indicate puns or other stretching of the rules.

Extras include ninas, the absolute icing on the puzzle cake. They take their name from cartoonist Al Hirschfield’s daughter; he had a habit of concealing the letters of Nina’s name in his drawings. They provide an additional message, somehow, by the answers after the puzzle is solved: perhaps by reading around the perimeter, or the sequence provided by every third letter in the filled-in squares. Ninas may or may not be present and, even if one is there, it can go unnoticed because, not being intrinsic to the solution, its presence is not advertised—or because it is so well hidden. The nina of ninas, at least for those of a certain literary taste, may be the one found in a Financial Times puzzle set by the mathematics professor who goes by the compiler name of Monk. The perimeter consists of a seemingly meaningless collection of letters, AGHBURZUMISHIKRIMPATUL. Although a not insignificant percentage of the Anglosphere has read those characters in that order before, it would have taken a sharp eye and a sharper memory to properly separate them. Agh burzum-ishi krimpatul, from the Black Speech used by the inhabitants of Mordor in J.R.R. Tolkien’s Lord of the Rings trilogy, is the final clause inscribed on Sauron’s One Ring: “and in the darkness bind them.” Connor calls it, “clearly the work of a brain bored with what was already a fiendishly difficult job.” We agreed, of course, that it was excessively fan-boyish to consider Monk’s nina among the heights of human intellectual achievement. Still: wow.

So to celebrate the centennial of the crossword, and that, too, of the Great War (hint, hint), Maclean’s offers a cryptic crossword for which a mind full of world-war associations might prove useful for some answers. Don’t bother looking for a nina—light years beyond the cognitive power available—at least, not in the puzzle. 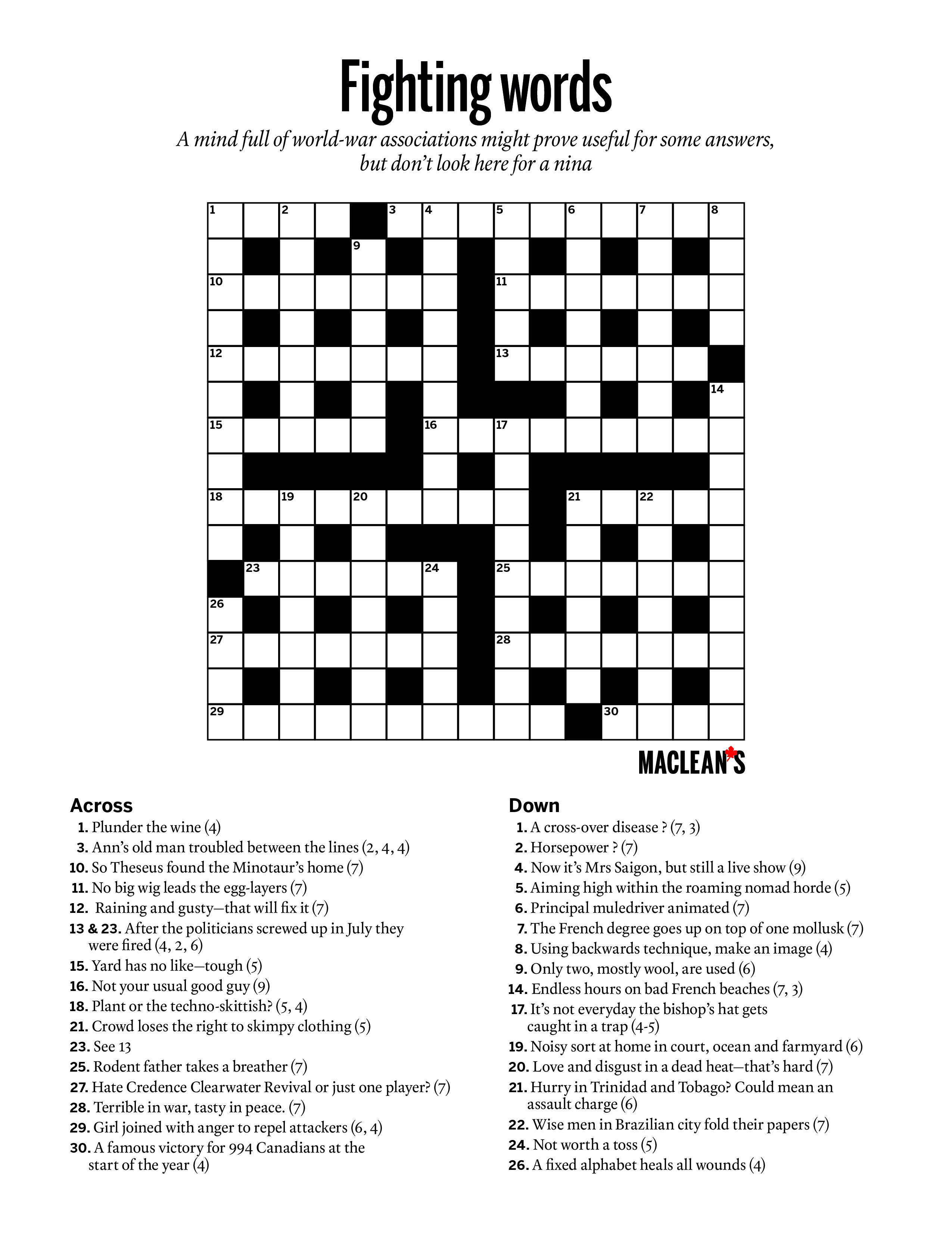