The new season of the popular Netflix series focuses on the doomed fairy-tale royal couple and the British prime minister of the day, Margaret Thatcher 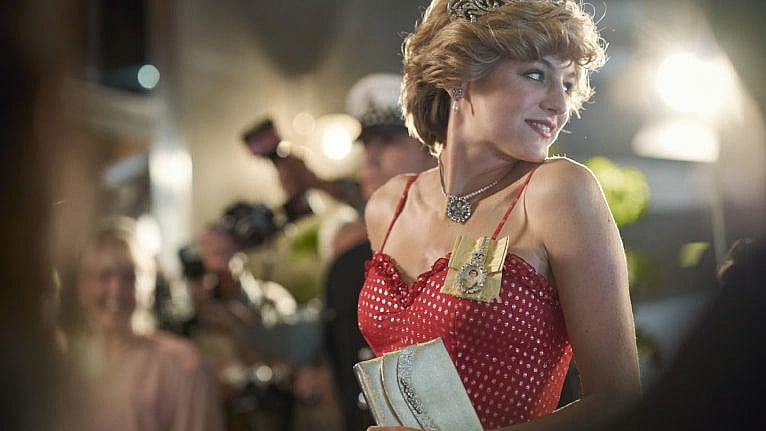 Diana Princess of Wales (EMMA CORRIN) in season 4 of The Crown. (Des Willie/Netflix)

The fact that The Crown is fiction coated by a veneer of truth drives some royal watchers to distraction. Yet it’s also a gripping drama created by a master, Peter Morgan (The Queen, The Audience, Frost/Nixon). This season—the fourth, which releases on Netflix on Nov. 15—is the best.

It opens with a bit of Canadian content, though few of its millions of viewers will know that. The first images are of Queen Elizabeth II stroking the nose of her horse before Trooping the Colour, which marks her official birthday. In real life, that horse was Burmese, a black mare born in Saskatchewan that the RCMP presented to the Queen in 1969. The monarch adored Burmese, so much so that she rode her at every Trooping the Colour from 1969 to 1986.

The new season revolves around three people who symbolized Britain in the 1980s: the doomed fairy-tale royal couple, Prince Charles and his teenage bride, Lady Diana Spencer, and Margaret Thatcher. Morgan starts the season in 1979, when Thatcher’s Conservative party wins election, and ends it in 1990, when the party ruthlessly dumps her as leader.

The 1980s was a decade famous for its air of frenetic superficiality: teased hair, flashy clothes and everyone dancing to one classic pop hit after another. Its relentless flitting from one fad to the next is echoed in The Crown, which whipsaws between royal and political events, such as in episode four, when Thatcher is dealing with Argentina’s military posturing ahead of its invasion of the Falkland Islands while the Queen, irked by Prince Philip’s incredulity that she can’t name her favourite child, has remarkably stilted conversations with each of them. (Her favourite is Andrew.) With too many characters to cram into a 10-episode season—including the now-adult younger children of the Queen and Prince Philip as well as spouses, confidantes, lovers and an array of secretaries and staff—previously important roles such as those of Princess Margaret and Prince Philip are relegated to supporting status.

RELATED: It’s time to let the third person out of Camilla and Charles’s marriage

Where this season excels is in the depiction of the relationship between Thatcher and Elizabeth II. Thatcher, played with an exquisite combination of steel and fragility by Gillian Anderson, earned her nickname of the Iron Lady by dominating every man on the political scene. The one person she couldn’t dominate, however, was the woman who had the very top job in the country: the Queen. In The Crown, Prince Philip immediately senses trouble in “two women running the shop.”

Morgan sets up Thatcher’s conflict with the Queen by portraying the prime minister as a workaholic who is mocked and ostracized by her family during a visit to Balmoral Castle. “I’m struggling to find any redeeming features in these people at all,” Thatcher spits.  “They aren’t sophisticated, or cultured, or elegant or close to an ideal at all…[Britain] needs to change fundamentally, top to bottom.”

For all that the marital travails of a stuffy, stubborn Charles and a shockingly young, needy Diana revealed a royal family dangerously out of touch with a rapidly changing society, their scenes are almost pro forma depictions, as if Morgan knows he has to cover them but is bored by events that have been picked over for years by tabloids and the public. And, though Prince Andrew and his wife Sarah, Duchess of York, were major royal stars in the 1980s, they get far less screen time than Princess Anne, who is given the royal role of blunt truth-teller to her family.

RELATED: Get ready for a ‘slimmer’ monarchy when Charles is in charge

To suit his plotting, Morgan dreams up dialogue and tension-filled scenes and melds or pulls apart real events to better underscore the themes of an episode or season. So when Charles and Diana descend aircraft steps to start their hugely successful tour of Australia in 1983, it’s raining on screen, matching the sour moods of the unhappy couple, while William wails in his mother’s arms. In reality, the sun was so intense that day in 1983 that the sleepy baby squinted contentedly as his father brushed flies away from his face. To deal with the happy images from that long tour that are stuck in the memories of so many viewers, Morgan has his characters temporarily reconcile in the middle of the tour.

And, in a twist that may surprise viewers, one of the most sympathetic characters is Camilla Parker Bowles. In this season, she’s got a husband who is a serial adulterer (true) and a lover (Charles, also true) who doesn’t understand how much the public adores Diana and will come to hate her. “If you put me in a popularity contest against her [Diana]…I will lose,” Parker Bowles tells the prince. “I’m an old woman. I’m a married woman. Nowhere near as pretty, nowhere near as radiant. Someone who looks like me has no place in a fairy tale.”

During all four seasons of The Crown, the beating heart of the series is the depiction of those private moments between prime minister and sovereign. As their audiences are famously secret, Morgan has full rein to create the images and scenes he wants and needs. In 1982, when Thatcher’s son, Mark, goes missing in the Sahara desert during the Paris-to-Dakar rally, the politician is seen struggling with her emotions while muttering that it’s not fair that it’s a woman prime minister who is the first to break down in front of her monarch. “It is by no means the first time a prime minister has broken down in here,” responds the Queen. “This is drawing room, office, confessional, and psychologist’s couch,” she continues before offering Thatcher a drink and tissue.

RELATED: An awkward end to Harry and Meghan’s royal life

Morgan has always relished creating scenes when power shifts between royal and politician. In The Queen (2005), he has then-prime minister Tony Blair try to buck up the Queen, bruised by her public battering after the death of Diana, by noting, “One day, it might happen to me.” The Queen silkily responds, “It will, Mr. Blair, quite suddenly and without warning.”

For Thatcher, that denouement comes in 1990 when, facing a party revolt, she goes to the Queen to ask the monarch to forestall the inevitable by dissolving Parliament. The Queen’s response is brutal: “I’m simply asking the question: whether it is correct to exercise a power simply because it is yours to use. Power is nothing without authority. And, at this moment, your cabinet is against you. Your party is against you. And if the polls are to be believed, if you were to call a general election today, you would not win, which suggests the country is against you. Perhaps the time has come for you to try doing nothing for once.”

Morgan also skips over any real events that would puncture his careful characterizations. In season four, Diana is left alone in an apartment within Buckingham Palace after she agrees to marry Prince Charles, essentially abandoned by family, friends and royals while struggling with bulimia. (“I get letters from people all over the world, but not a squeak from the man I’m supposed to marry,” she says during one of her few outings, a lunch with Camilla.) On screen, Charles doesn’t see her until the wedding rehearsal. Yet, dust off any royal wedding book and there are engagement pictures of Diana laughing while she plants a tree with Charles; Diana wearing a low-cut black gown at a gala with Charles and Princess Grace of Monaco; Charles, Diana and Princess Margaret at a society wedding; umpteen images of Diana with Charles and her friends at polo fields; Diana at Wimbledon; and Diana enjoying several days of Royal Ascot with a selection of Windsors.

RELATED: Princess Diana’s legacy is more urgent than ever

On the flip side, The Crown has perfected how to seamlessly meld real videos of royal events into its series, such as the massive crowds that turned out in Australia to see Charles and Diana during their tour in 1983. And the outfits worn by the actors are almost perfect copies of those worn by the royals, including the filmy metallic blue gown that Diana wore while floating across the dance floor with Charles in Sydney. (Fun fact: 27 years after wearing a yellow-and-white dress to her big brother’s wedding, the real-life Princess Anne pulls it out of her closet for another royal nuptial.) Indeed, the only major costuming fail involves the family’s famous tiaras; the on-screen variants are so super-sized that they look like they were purchased at dollar stores.

There are two seasons left in The Crown. All the actors involved in seasons three and four will be replaced with new, age-appropriate ones for the last two seasons. By its end, likely to be around the 2005 marriage of Charles and Camilla, the series will be butting up against events that are still fresh in the minds of viewers, making it harder to fit events into a dramatic narrative. Luckily, the series has a creator more than capable of surpassing that challenge.