The elevator warning at the centre of Canada's political reckoning 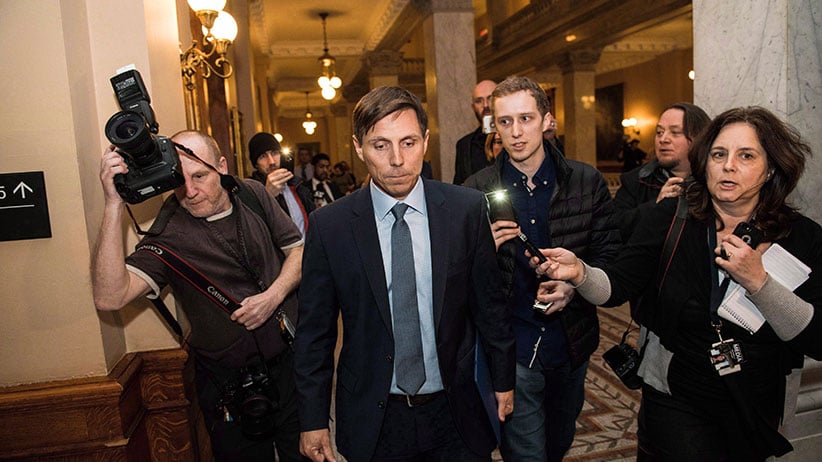 If one image animated the #MeToo movement in the U.S., it was the spectre of a naked Harvey Weinstein, bathrobe agape, in a hotel room. When the seismic social shift summoned by #MeToo walloped Canadian politics—forcing the resignation of provincial Conservative party leaders Jaimie Baillie and Patrick Brown, Liberal cabinet minister Kent Hehr and Rick Dykstra, president of the Ontario PC party, within hours, with the investigation of a report that NDP MP Erin Weir exhibited “harassing behaviour toward women”—a seemingly more benign power-abuse image emerged: the workplace elevator.

Kristin Raworth—the first of three women to accuse Hehr, a former minister of sport and persons with disabilities, of inappropriate sexual behaviour—said she was warned not to be alone with the politician when she began working at the Alberta legislature. “My very first experience with him was in an elevator when he called me ‘Yummy,’ ” she wrote on Twitter. The parliamentary staffer who alleged Dykstra sexually assaulted her in 2014 when he was an MP, also cited fear of elevators in the aftermath: “It became almost crippling for me any time I needed to use the elevator and have to leave my office, because I knew there was a chance I would have to be in close proximity to him,” she told Maclean’s. (Dykstra says he “categorically denies” the allegations, which have not been proven in court.)

Warnings about elevator confinement are appallingly common in Canadian legislatures and Parliament. The uneven power dynamic created by older, influential men with boundary issues working with young female staffers can result in a toxic climate in which withstanding physical encroachments becomes part of the job description. Patty Hajdu, the federal minister of employment, workforce development and labour, referred to worry about private, contained spaces when speaking to iPolitics about how young female staffers on the Hill are vulnerable to abuse, protected only by whisper networks: “They do know which MPs to avoid and which MPs, when they’ve had too much to drink, are kind of ‘gropey,’ and which are not,” Hajdu said, speaking of men who govern the nation in 2018. Systemic power imbalances will have been righted, she added, “when staffers tell me that no, there is no one they are uncomfortable getting into an elevator alone with.”

MORE: Inside the explosive Conservative Party fight over Rick Dykstra

Fear of abuse in taxpayer-funded lifts is a pernicious metaphor for the impediments faced by women who want to rise in politics, or even just do their jobs  (the staffer who reported Dykstra eventually left federal politics). Paradoxically, the arrival of the “reckoning” on Parliament Hill has exposed the need for more women in backrooms and up front to confront the problem. As Maclean’s reported, the federal Conservatives’ debate over whether to let Dykstra run as a candidate in 2015, knowing that a staffer had reported a sexual assault to Ottawa police (the investigation was stopped at the woman’s request), was divided along gender lines. Women, the minority, wanted Dykstra gone. When he lost his bid for election, he was named Ontario PC president. Canadian Press recently surveyed the 89 female MPs who make up 26 per cent of the House. Of the 38 that took part, 58 per cent said they’d been affected by sexual misconduct in office. Of the 22 who gave details about the perpetrator, 15 said it was another MP. Equally damning is the fact that staffers working at the epicentre of Canada’s power nexus lack basic sexual harassment protections, as do other federally regulated workers. #MeToo forced the fast-tracking of Bill C-65, whose safeguards include preventing reprisals against complainants. The bill is but a Band-Aid. Clearly, major reconstructive surgery is required.

Yet revelations of sexualized power abuse in the political arena—the place the public’s will is represented, and where laws are enshrined and judges appointed—offers an opportunity to explore intersections of the two seemingly diametrically distinct “courts” animating #MeToo: the court of public opinion and the court of law. Toronto criminal lawyer David Butt, who acts for complainants in sexual violence cases speaks of an “awakening” in the court of public opinion: “For too long, people were victimized and not believed,” he says. “People took advantage, particularly people in power, and that’s disproportionately men taking advantage of women.” (Butt now represents one of Brown’s accusers; he had not been retained by her when he spoke with Maclean’s.)

Now we’re witnessing the forceful consequence of decades of pent-up discontent, pain, anger, career derailment and regret over not speaking up. “We’ve known for years that in excess of 90 per cent of sexual violence or sexual mistreatment goes unreported to authorities,” Butt says. “We’ve known there is widespread victimization in a host of contexts. So it was no surprise there was immense pressure on the dam. But it’s always a surprise when the dam actually bursts.”

When actual dams burst, we know, entire ecosystems can be tragically swept up. Hence predictable concern over a potential pendulum swing from silence to false accusations; the prescient Margaret Atwood, rightly seeing revolution at hand, stoked outrage when she evoked scary imagery of the “terror and virtue” phase of insurrections, in which “rules of evidence” are bypassed and purges executed. She warned of guilt by mere accusation, summoning the Salem witch trials. Toronto lawyer William Trudell echoed the theme in a recent op-ed in Canadian Lawyer, in which he called the #MeToo and #TimesUp campaigns “dangerously fad-like”: “Allegations, once out there, become gospel. Reputations are carpet bombed.” But we’re seeing those who speak up vilified even more harshly. Raworth, for one, has reported receiving death threats: “I wish I hadn’t said anything,” she told the Edmonton Journal. “If this is the price, it’s just not worth it to me.” Meanwhile, political strategist Gerry Nicholls expressed concern for men. “It’s a dangerous time to be a politician,” he told CTV’s Power Play.

It’s only dangerous, of course, for those politicians who can credibly be shown to have harassed or assaulted. Or those oblivious to the seismic social shift underfoot—one that has given new meaning to “culture trumps policy,” a phrase bandied about in public policy and management circles for years. Social movements, we know, presage policy and legal changes; the women’s movement of the 1960s saw banks stop requiring men to co-sign loans for women, employers to allow women to work post-child-bearing and sweeping legislation that included marital rape laws.

In a hastily convened press conference to deny sexual impropriety accusations from two women, one a former staffer, Brown proved himself out of touch with political realities by suggesting the legal system would protect him. “I’ve instructed my attorneys to ensure that these allegations are addressed where they should be: in the court of law,” he said.

Yet the court of law played no role in his ouster, and won’t unless Brown chooses to file defamation suits, as is his right; the court of public opinion is also governed by law. Judicial due process wasn’t required: Brown was tried by a caucus who wanted a suddenly politically toxic leader out. And nothing is now more politically toxic than an accusation of sexual mistreatment. Hehr faced multiple accusations of making insensitive remarks to veterans and thalidomide survivors in recent months, all of which he denied. Yet within hours of claims of sexual impropriety, he was out, though he remains in caucus pending a third-party investigation.

Any shift in consciousness runs the risk of extreme oscillation from unacceptable at one end of the spectrum to unacceptable at the other, says Butt, who points out that things have to settle in the middle as we figure out what that middle means. He calls for “ironic detachment,” a collective state of mind “where we say, ‘We will believe, but we’re quite open in the rare case to be proven wrong.’ ” The Brown case raises an important question that requires a nuanced answer, he says: “Do we run the risk of rushing to judgment on flimsy evidence because we have a new cultural norm of belief?”

Not surprisingly, lawyers want courts of law to be the one and only forum. “Litigants should accept that their allegations must only unfold in a courtroom,” Trudell writes, ignoring the fact that #MeToo is in part a backlash to systemic unwillingness and inability to address sexualized power abuse. Butt refers to a “gap in service delivery” that needs to be addressed: “The process is not nearly broad or welcoming enough to deal with all of the instances of legitimate sexual mistreatment. People who suffered in silence are finally having the courage to say, ‘This sucks, I’m not staying silent,’ but they don’t have anyone to go to. So they’re going where they can go—to a receptive media.”

READ: If #TimesUp in Canadian politics, what must we do to make real change?

Many are uncomfortable with media adjudication. Yet without alternate channels to the courts, there would be no cathartic moment with which to influence necessary changes in policy and law. Weinstein was exposed not by police investigation but by exhaustive, credible journalism. Likewise, the Wall Street Journal interviewed hundreds to nail down its report that Las Vegas hotel mogul Steve Wynn, the Republican National Committee finance chair, sexually assaulted dozens of employees. Judge Rosemarie Aquilina, who sentenced sports doctor Larry Nassar to up to 175 years in prison for assaulting female athletes over decades, praised the Indianapolis Star, which in 2016 investigated a former gymnast’s report that Nassar assaulted her when no one at USA Gymnastics believed her. Police investigated Nassar in 2014; no charges were laid.

We’re in new, complex terrain, as Butt notes. “One unintended consequence of an accelerated news cycle is that media works more dramatically at cross purposes with justice processes. A lot of fault lies with justice processes for being so slow. On the other hand, media can influence behaviour based on things that may or may not stand up in court.”

Legislation alone can’t end sexism on the Hill, as Conservative MP Michelle Rempel has eloquently pointed out: “We cannot legislate against someone choosing to use their influence or power imbalance to diminish someone else,” she said in the House, calling for bipartisan support. Similarly, zero-tolerance policies and removing individuals don’t necessarily address systemic power imbalances and abuses. Darshan Kang, Liberal MP for Calgary Skyview, was expelled from caucus last year after reports he’d harassed and assaulted staffers when he was an MLA. David Khan, Alberta Liberal Party leader, promised an internal investigation. Complainant Kirstin Morrell recently told the Calgary Herald she hasn’t heard from any party official.

Real change, of course, requires entrenched cultural norms be challenged and upended—be it the deification of the star coach, undue dependence on charismatic leaders, expanding what consent means or even our version of Harvey Weinstein’s hotel suite: the unacceptably harrowing Parliament Hill elevator.