She was a risk-taker always up for something new. After a tour in Afghanistan as a medic, she was set to start nursing school. 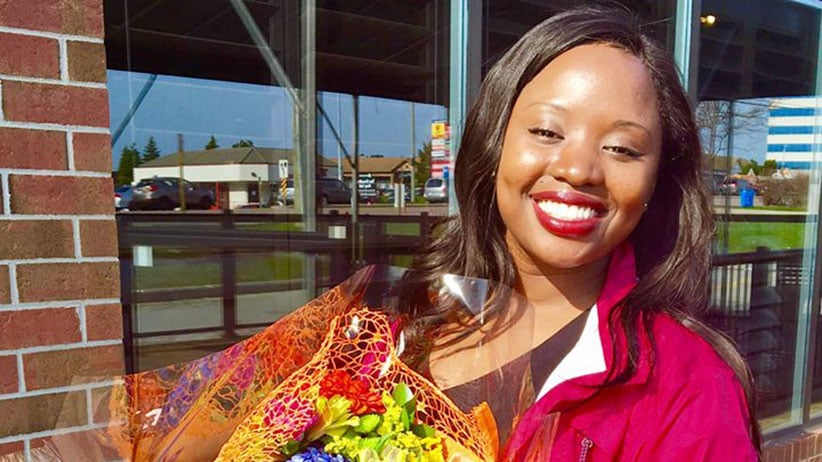 Betiana Namambwe Mubili, whom everyone called Betty, was born on April 14, 1988, in Kitwe, Zambia. Her father, Viktor, left for England on a two-year engineering scholarship shortly after. While he was gone, her 17-year-old mother, Betsy, married another man.

Betty could be a feisty, stubborn young girl, and she sometimes squabbled with her father on his return from England. “She had personality,” says Viktor. “She loved life.” When Betty was eight, Viktor decided he wanted sole custody. Under Zambian custom, he first had to pay a US$600 dowry to Betty’s maternal grandfather.

Viktor’s family complained, the price high by Zambian standards. But, he says, “I looked at Betty as the ultimate investment. I knew that I would be able to make her into a responsible human being.”

Work took Viktor to Saudi Arabia in 1996. Fearing how women are treated in that country, Viktor left Betty with his older brother in the small Zambian city of Mansa. He visited every six months. In 2000, Viktor moved to Canada because he felt it the best place to bring up Betty. In February 2002, he brought her to Mississauga where she enrolled at Queenston Middle School.

Canada “was a very big shock” to her, says Viktor. “I remember her going to school, where they had pizza on Fridays. And Betty had never had pizza before.” She had difficulty understanding the Canadian English accent at first, “but she worked very hard … within one semester, she was good to go.”

At first, Viktor worked as a car salesman. The Mubilis lived in a small basement suite, and money was tight. At Queenston, and later Woodlands High School, Betty immersed herself in sports, playing soccer, cycling and often running with her dad in the early mornings.

Church became a big part of her life. “I said to her,” recalls Viktor, “we are going to read the Bible from the first page to the last page. And that was quite a fight! ‘No, Dad!’ she said to me. ‘Who would want to do that? That is too much.’” But they did it.

They attended Grace Fellowship in Etobicoke. Viktor was the first black person in the small congregation. When Betty arrived, she was the second. Mabel Opoku, a leader in Toronto’s Zambian community who befriended the Mubilis, recalls Betty as an independent thinker “with a unique smile and slow to anger … She was a risk-taker but never feared.” The family grew when Viktor married Agnes in 2004 and their son, Issa, was born in 2006.

Betty applied to nursing school at Guelph, but was turned down, so her dad urged her to join the Canadian army as a medic. Her basic training in Gagetown, N.B., in 2006, was tough: of approximately 12 women recruits, only half made it, including Betty.

She was posted to Edmonton in 2008. Philippe Chevalier, an armored vehicle crewman, was her roommate. Betty, he says, was “an adrenaline junkie. She was always up for trying anything at least once.” She loved to dance and cook. He and Betty often worked out at the gym together or went go-carting or swimming.

In 2011, Betty did a one-year tour of duty as a medic based in Kabul, Afghanistan. The Canadian mission was morphing from a combat role into training local police; the threat to Canadian soldiers, says Philippe, was still “100 per cent.” As a medic, “Betty was outside the wire quite a bit.” Her dad worried. “She was quite afraid on her way there. But once she got there and she saw her comrades, that went away. Also her faith had grown. She was so sure that, apart from her comrades looking out for her, God was also looking out for her. If her number was up, it was up.”

Betty lived at Garrison Petawawa after Afghanistan, and was accepted into a Canadian Forces program to develop members “who have demonstrated excellent leadership attributes” into officers. Betty was also slated to move to Toronto to finally take nursing at Guelph, and train to become a lieutenant.

Anticipating that she’d have to master skydiving as part of her training, she decided to get ahead and train privately. She did her first jump, a tandem dive from 10,000 feet, on July 31. Afterwards, she said it was “the best experience of my life.”

On Sunday, Aug. 27, at about 6 p.m., she did her first solo jump. Her parachute and reserve chute both malfunctioned. She slammed into a field just south of Petawawa, and died instantly. She was 29.