He wasn’t sick a day in his life, and friends called him unstoppable. Even at 101 he was dancing the jitterbug. 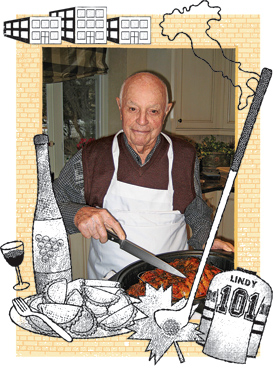 Gilindo Marcocchio was born on Dec. 10, 1909, in the small Italian town of Castions di Zoppola, near what was then the Austro-Hungarian border. His father, Antonio, was a cook for a wealthy family who offered to adopt Gilindo. But his parents refused to give him up. By the time Gilindo was 12, though, he was orphaned: his mother Maria died of the flu, and Antonio of a heart attack. After that, Gilindo’s three brothers left Italy in search of work in Canada and Mexico, and the young boy was left to be raised by two sisters, in a modest house they shared with chickens and pigs.

During the First World War, Gilindo had to flee his town and move inland, away from the border area, which was under siege. Just after he crossed a bridge near his home one day, it was bombed by the Germans. Gilindo watched in horror as horses and carriages were tossed into the air, and people he knew perished instantly.

By 16, having survived the devastation that characterized wartime Italy, he joined his brother Isadoro in Windsor. Since Gilindo never attended school, and didn’t know how to read or write at the time, he learned a trade: bricklaying. After five years, when jobs dried up with the Depression, he headed east. In Toronto, during the 1930s, Gilindo worked as a tradesman, and soon became known as Lindy. He helped build Maple Leaf Gardens, and in 1931, attended the first-ever hockey game played there (the Leafs lost to Chicago, 2-1).

In 1935, he met Elda Di Fonzo, a neighbour in the adjoining house where he was boarding with his paesans. She was 16, and a hairdresser. “He had the longest eyelashes I had ever seen,” she recalls. They wanted to marry, but Elda had to wait until her older sister wed first. Three years later, they drove to see the Dionne quintuplets in North Bay, Ont., for their honeymoon.

Elda and Lindy had three children: Sandra, Rob, and Kathy. He often worked six days a week, but always tried to make it home for lunch at noon, when Elda cooked northern Italian fare—polenta, risotto and rich pastas, served with wine. Lindy always washed the dishes after every meal, and at 12:30 pm, he’d take a 30-minute nap before returning to work. “He was never sick a day in his life, never got illnesses, never entered a hospital, never had an operation,” says his daughter Kathy. Later in life, when asked about the secret to good health, Lindy replied, “My wife’s cooking.”

By the 1940s, Lindy went from being a tradesman to hiring trades for his own projects. In 1947, he bought a piece of land in Etobicoke, Ont., then a Toronto suburb, and developed an apartment building. It would be the first of seven. Ten years later, his business, G. Marcocchio Ltd., was flourishing: 36 apartment units grew to 250.

Every day, he’d go and check on his buildings, and with a small, ubiquitous pad of paper, sketch ideas for how he could improve them. Lindy never retired. Even two years ago, he told a friend, Jerry Bratty, that he had mapped a plan for an addition on one of his units. Jerry said, “Lindy, you’re 100 years old.” But Lindy was unstoppable. “The money will go to my grandkids one day,” he said. “It’s a good idea.”

In December 2009, when Lindy turned 100, he went to a Maple Leafs game, where he was honoured with standing ovations and jersey No. 100. There was indeed cause for celebration: Lindy was in perfect health. One of the longest-serving members of Toronto’s Bayview Golf and Country Club—he joined in 1956—Gilindo golfed until he was 97 (he quit only because all his buddies had predeceased him). He still went to his cottage in Wasaga Beach, Ont., and his condo in Hallandale, Fla. When he’d land in the U.S., he’d get a wheelchair for Elda, and push her through the gate. He could also drive. When stopped for speeding in 2009, the policeman marvelled at his age—he had never encountered a centenarian behind the wheel.

At 101, Lindy danced waltzes and the jitterbug at his granddaughter’s wedding in Chicago. He also flew to Mexico to visit family last year, and then to his hometown where his parents were buried nearly a century ago. The Icelandic ash cloud almost grounded him in Venice, but when he heard he could get a flight out of Rome, he took an overnight taxi for six hours to the Italian capital.