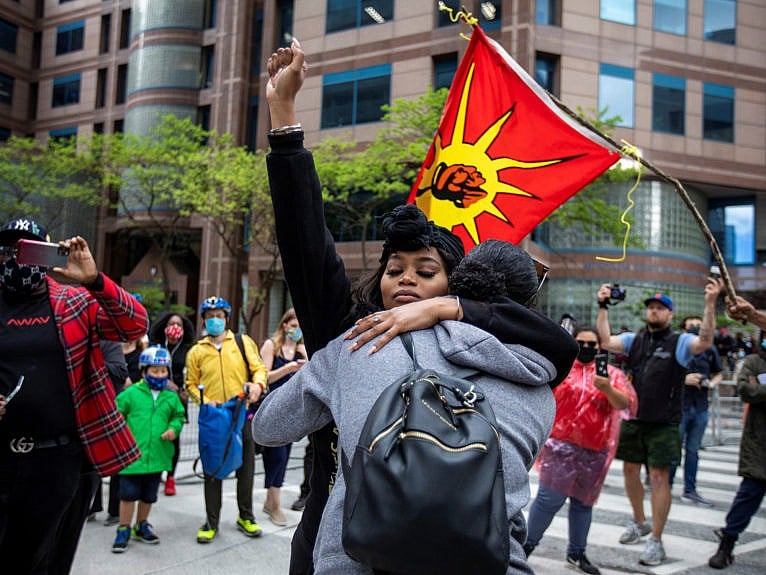 Outside Toronto Police headquarters, protesters highlight the deaths in the U.S. of Ahmaud Arbery, Breonna Taylor and George Floyd, and of Toronto's Regis Korchiniski-Paquet (Carlos Osorio/Reuters)

It is a hard thing, to think of a deeply held notion that has been dispelled when it comes to race. Because, the truth of the matter is that historically marginalized people have long been speaking out about race and injustice. It’s just that the majority weren’t paying attention, didn’t listen, and if they did, didn’t care.

One thing that has changed is that you can no longer pretend to be ignorant about systemic racism and injustice facing Black and Indigenous people. In the wake of public ­protests, viral stories, wide-scale media attention and heightened outrage, it is and will be more difficult for people to deny it or claim ignorance. There are of course still those who will try, but it will hopefully be more difficult to do so as more spotlights shine and the light becomes harder to look away from—stats of disproportionate COVID-19 deaths, videos of excessive force or racist vitriol, and stories that receive traction and coverage. How can you deny systemic racism, when the drywall in Breonna Taylor’s apartment got more justice than she did—the officers charged for the bullets that missed, not the ones that killed her? How can you deny systemic racism when hearing nurses mock a dying Joyce Echaquan, calling her “stupid as hell,” saying “she’s only good for sex and better off dead”?

Many people have been able to live in blissful ignorance about how systems impact the lives of others because these systems did not impact them in the same way. For many, that ignorance has been altered by the events of this past summer. I don’t think people will be able to look away the way they could before. COVID-19 locked us in our homes, with the internet and news at times our only connection to the outside world. We were unable to distract ourselves from the terrors of the world with a beer or a dinner out or a visit to a comedy show. There are some things that once seen, cannot be unseen.

We have now seen some try to deny systemic racism and fail in ways that were not possible before. In June, Ontario Premier Doug Ford backtracked his statements about a lack of “systemic, deep roots” of racism in Canada, acknowledging a history of systemic racism in Ontario. Also in June, Alberta RCMP Deputy Commissioner Curtis Zablocki denied systemic racism in policing in Alberta or even Canada, then a few days later, referred to “conversations that have challenged my perceptions and made it clear that systemic racism does exist in the RCMP.” And that same month, RCMP Commissioner Brenda Lucki tried to deny the existence of systemic racism in the RCMP, despite a mountain of evidence to the contrary. Our carceral system disproportionately affects Black and Indigenous people at all levels—they are more likely to be victims, have higher contact with police, are more likely to be taken to a police station for processing and held overnight, have more conditions imposed when given bail, are overrepresented in jails and less likely to be paroled. These are not new findings—so many reports have shown this, time and time again. The 1991 Manitoba Aboriginal Justice Inquiry. The 1994 Commission on Systemic Racism in the Ontario Criminal Justice System. Ontario’s 2008 Review of the Roots of Youth Violence. The Truth and Reconciliation Commission. A recent report found that members of the Montreal police force were four to five times more likely to stop Black and Indigenous people in street checks than white people, and 11 times more likely to stop Indigenous women than white women.

Commissioner Lucki made her denial just over a year after several RCMP officers shared stories about the racism they commonly endured as members of the force. When initially walking back her words, Lucki still didn’t say the phrase “systemic racism exists,” instead delivering this word salad: “I did acknowledge that we, like others, have racism in our organization, but I did not say definitively that systemic racism exists in the RCMP. I should have.” These statements were the barest minimum of steps, but steps that might not have happened before. However, without actual, tangible action behind those words, they reek of performative allyship at best, and something more sinister at worst.

How can one have confidence in leaders who didn’t even believe there was a problem until very recently? When you’re not even sure if they actually believe there is an issue, or if they are simply trying to save their own skin? What do you do when removing that individual would likely just see them replaced with another person who feels the same way, having been raised, sculpted and promoted in the same system? A system born of settler violence?

The thing that will drive change is action, and real consequences for inaction. I once heard that there are three ways to be. You can be actively racist, you can be passively racist, and you can be actively anti-racist. But it is impossible to be passively anti-racist, because confronting systemic racism requires action. As an organization, as an individual, you can be part of the solution or part of the problem, but there isn’t a reality where you can be neither. Outrage is something, but it is often fleeting—it fades as the news cycle moves on. Will we need another catalyst to muster the political and social will to act, to tear down old structures and replace them with something better? To drive outrage into action that benefits others? For there to be tangible consequences for denying the plain truth? What will that be? What will it take, if this current moment isn’t enough? I don’t know the answer. I don’t think anyone does, yet.