The five hardest punches George Chuvalo has ever taken

Advice from George Chuvalo: Watch out for water pitchers 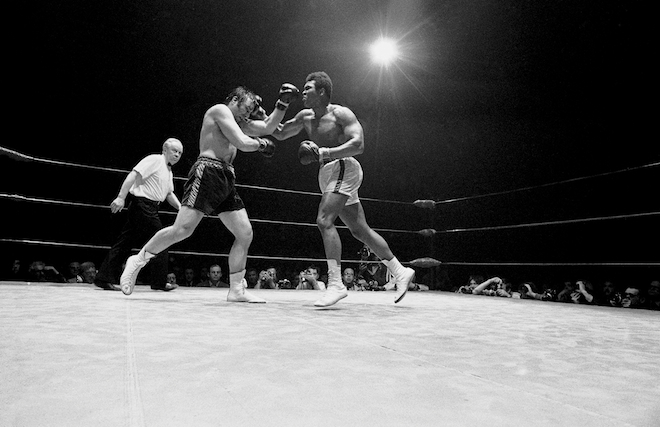 In 93 professional fights, often going toe-to-toe with the best heavyweight boxers in history, George Chuvalo was never once knocked down. But that doesn’t mean he never took a solid punch to the head. Here are the ones he remembers most, in his own words, counting down.

5. Joe Frazier: “My eye was already so swollen that my right eyeball was sticking out like one-eyed Marty Feldman—these bulging eyes. So when I got hit with a left hook, it messed up my right eye. That hurt like hell. It didn’t rock me. I just felt the pain of the punch, as it drove my eyeball through the optic floor. So when they operated on me, they took my eyeball out and put in a piece of plastic silicon. I have a piece of silicon in my head holding up my right eyeball.”

4. Mel Turnbow: “I remember just getting rocked, like, ‘Whoa man!’ BOOM!’ I didn’t wobble, but it was a good right hand to the temple.”

3. Mike DeJohn: “I really didn’t know until I saw the video of it some 25 years later. My legs dipped about an inch when I got hit with a blazing uppercut—like, ‘WHOAW!'”

1. Lynn Chuvalo (his first wife, now deceased): “When you see a punch coming in the midst of a fight, you brace yourself. The worst thing is to get hit with a sucker punch when you don’t see where it’s coming from. BOOM. Got whomped from behind with a heavy glass water pitcher. That was the worst pain I ever felt getting hit with anything. I never really asked her afterwards, ‘Why did you do that?’ ”