The Five Hole: Beating Oilers a part-time job at most

Time to sit back, take a deep breath and OVERREACT LIKE A CRAZY PERSON 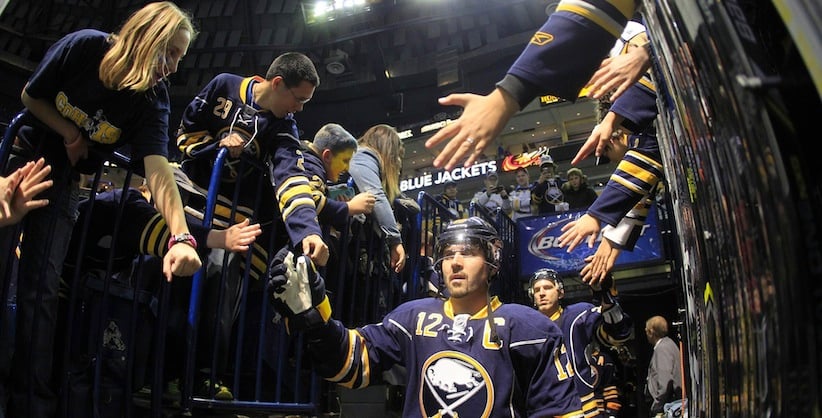 1. We’re a little more than a week into the NHL season now – time to sit back, take a deep breath and OVERREACT LIKE A CRAZY PERSON. The Islanders are awesome! The Rangers are terrible! Calgary goalie Karri Ramo has six arms and operates using bat sonar!

2. Speaking after a 6-1 loss to the Kings, forward David Perron said of his 0-3-1 Oilers: “We have to be better on the [penalty-kill], the power play and five-on-five.” Other than in those rarely seen formations, Edmonton is doing great.

After the game, Tanner Pearson of the Kings discussed the biggest challenge of playing against the Edmonton Oilers right now. “You just try to stay in it,” he said. “It’s more mental, once you’re up by however many.” In other words, remember to bring along some reading material to keep the mind active while crashing the Oilers’ zone on the forecheck. Your 2014-15 Edmonton Oilers, everyone!

3. “That was like an NHL team playing against a peewee team,” Ted Nolan, coach of the Buffalo Sabres, was saying after a 5-1 loss to Anaheim.

A peewee team? Having been involved in peewee hockey, I question that. Before you can legitimately compare your players to our kids, Ted, the Sabres must first meet the following standards:

By the way, the Sabres won in a shootout the following night and Ted Nolan was suddenly revising history: “I’ve never questioned the character of this team one time,” he said. Riiiiight. Guys, when I likened you to 11-year-old ankle burners, I was merely complimenting your youthful complexions.

4. The Dallas Stars are finding their form and coach Lindy Ruff sounded happy after a recent win dominated by Tyler Seguin and Jamie Benn. “That was an awesome display,” Ruff said. “Seggy had a heck of a game, and Benny the same thing.”

Yep, no doubt about it, it was a pretty great perfo–– Hang on. Did he say: Seggy?

Ladies and gentlemen, the deepening crisis in hockey nicknames can no longer be ignored. For decades we have watched as players from coast to coast, from junior hockey to the pros, have simply added a “y” or “er” to part or all of a player’s surname – and had the gall to consider that a nickname.

What happened to nicknames based on character traits, physical characteristics or playing style? What happened to Boom Boom and Moose and the Hammer? Don’t today’s players see the potential marketing opportunity in having a nickname that is actually a nickname?

I say we begin by referring to Phil Kessel as “Snacks,” and take it from there.

5. Talking to reporters this week, Kings coach Darryl Sutter referred to a shutout as “a cob,” an expression I’d never heard before. Apparently, back in the day, they used to say things like, “We beat them 5-cob.” A Google search turned up a book that included the following sentence: “The word ‘cob’ is used in hockey to describe a shutout, the corn on the cob resembling a big zero, as it were.”

OK, but… doesn’t a cob of corn look more than a “1” to you? Did corncobs look different back in nineteen-aught-nine? Did we genetically engineer away their spherical qualities in a hubristic attempt to defy the very God who created us? Had professional hockey players of a century ago never seen an orange?

The larger point is: let’s get more old-timey sounding expressions back into the game. “Cob” sounds cool! Henceforth, a shutout is a “cob,” an overtime game is a “fancy Nancy” and a puck is a “hobo steak.”