The forgotten Chinese labourers of the First World War

Vast battalions of Chinese labourers were shipped through Canada to work on the front lines of Europe, many of them to their deaths 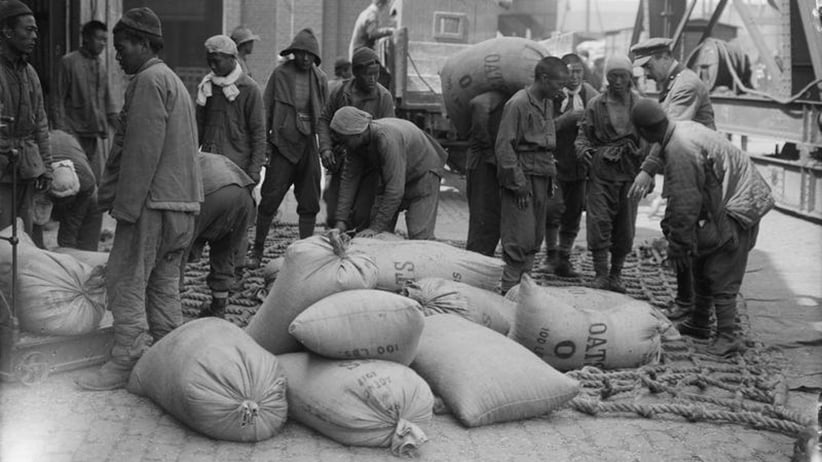 For much of the former British Empire, including its oldest colony, Newfoundland, the only place of importance during the Great War a century ago this month was a river valley in France. On July 1, the Battle of the Somme opened much as it would grind on for the next five months, with the bloodiest day in British military history. On the date military historian John Keegan once described as “the day something vital left the British Empire,” imperial forces suffered 20,000 casualties. But in Keith Jeffery’s more globalist month-by-month account of the First World War’s hinge year—the one from which there was no turning back to the status quo ante—the Irish historian opted to turn to little-known but significant developments in Asia.

In late June the Russian General Staff—faced, like all belligerent nations, with the war’s insatiable demand for manpower—decided to impose work-battalion conscription on the mostly Islamic nomads of Russia’s Central Asian possessions. The decree fell on a population already stressed by wartime taxes and food requisition, and marginalized by a pre-war influx of Russian and Ukrainian farmers busy turning grazing land into cotton plantations. In early July there were riots and semi-organized local insurgencies. The draconian Russian response, which included mass executions and razing settlements, provoked larger-scale risings, followed by even more ruthless suppression, eventually driving some 300,000 people over harsh mountain passes to Chinese territory. By the end of the year, only months before the first of 1917’s revolutions, the entire southern flank of the Czarist empire was already in violent upheaval.

For historian Tim Harper the Russian situation was just the most extreme of the conditions thrust by the war onto the great imperiums that covered much of Asian: the new Chinese republic, still struggling to establish itself; the Ottomans; the British Raj in its great arc of territory stretching from Egypt to Malaysia; the French in Indochina; and even the neutral Dutch East Indies. Only the Japanese Empire, free to overrun German possessions, rather enjoyed the First World War in Asia. European officials, for their part, for the first time worried openly about the long-term future of their colonial rule, as administrators extracted ever more war materiel from restive subjects, all the while proclaiming (on the Allied side) that their struggle was in defence of national rights, freedom and democracy.

The demand for manpower, as the Russians discovered, was the greatest stressor. European colonials furiously wrote their home governments about importing Asians to Europe, usually in a variant of the American worry about “how to keep the boys down on the farm once they’ve seen Paris?” A Frenchman in what is now Vietnam warned “nothing good” would come of a policy that would only “create malcontents and revolutionaries once they have seen in France a number of things one must not let them see or hear.” (Presumably he meant French workers with trade-unionist ideas about worker power and, given the sexual subtext of much colonial thinking, unescorted white women.)

Given their needs, though, the home governments bit the bullet. China, rebuffed as a fellow ally by the Japanese, who did not want to accord the republic that level of equality, hit on the idea of gaining a seat at the eventual peace talks via an offer the hard-pressed Allies couldn’t refuse: labour battalions. Between them, Britain and France raised 100,000 workers in China, shipped them across the Pacific to Vancouver, by train to Halifax, and from there across the Atlantic to the Western Front. Hundreds died en route, mostly on ships sunk by German subs, and thousands more died from shellfire when working close to the front lines. Nearly 2,000 are buried in Commonwealth War Graves cemeteries, commemorated by name and unit number—nothing else is known of them. Little else better illuminates the global reach of the Great War than those graves, markers for men from 10,000 km away, caught up in what must have been for most an inexplicable disaster.