Contrary to popular belief, there is no correlation between a Game 3 win and a series victory 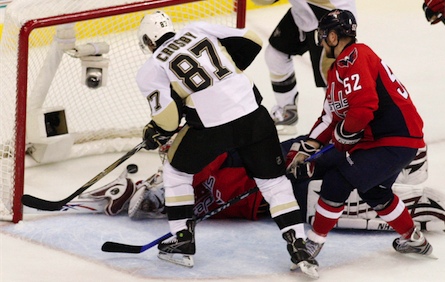 It’s right there in the Big Book of Hockey Clichés: “pivotal Game 3.” Type the phrase into Google and you get 25,000 hits—starting with Tuesday night’s contest between the Detroit Red Wings and Anaheim Ducks. Game 3, we’re reminded each year, is the watershed match of a seven-game playoff series. What began as accepted wisdom is now an article of faith.

Truth is, simple math illustrates that a win in Game 3 confers no more edge than you’d expect of any playoff victory—maybe even less. In 300 series over the last 20 NHL playoff seasons, only 191 teams who won Game 3 went on to clinch the set. That’s about 64 per cent, which is not statistically significant. Bear in mind that any team that triumphs in a series has won four times in seven or fewer games. There is a better-than-even chance, then, that one of those victories would have come in Game 3. Bottom line: there is no special correlation between a win in that third outing and a series victory.

Hard to believe, because for some reason Game 3s always feel important. If a team is down by two games, it must—must—win to keep its hopes alive. If it is up by two games, a Game 3 victory puts it on easy street, with a fat, three-game cushion and little likelihood of losing. This much is born out by history: only two NHL teams have ever fought back from a 3-0 deficit to win a series (the New York Islanders did it in 1975, and the Toronto Maple Leafs in 1942). Finally, if the two sides are deadlocked at one win apiece, the third game takes on truly outsized proportions. The loser of Game 3 must then win three out of the remaining four games to prevail, which sounds next to insurmountable.

Yet you’d be surprised how often that happens. Fully 52, or one third, of the teams who found themselves in that jam over the last 20 seasons have clawed their way out. You’d think that more than 66 per cent of teams who won those Game 3s, going ahead 2-1 in a seven-game contest, would win. But there again, the numbers don’t lie. A win in Game 3 is just a win—nothing more, nothing less.

The lesson for coaches and players in all this is obvious: no game counts more than another in the playoffs—short of the one that wins or loses it for you. As for fans and media, there’s no harm in ramping up the hype. When Alex Ovechkin and Sidney Crosby line up tonight for Game 3 in Pittsburgh, it may be nothing more than another playoff game. But in our minds, it will be as pivotal as we care to make it.