Finding the humanity in schizophrenia

Susan Doherty, author of The Ghost Garden, delves into the damage wrought by one of the most terrible and terrifying mental disorders known 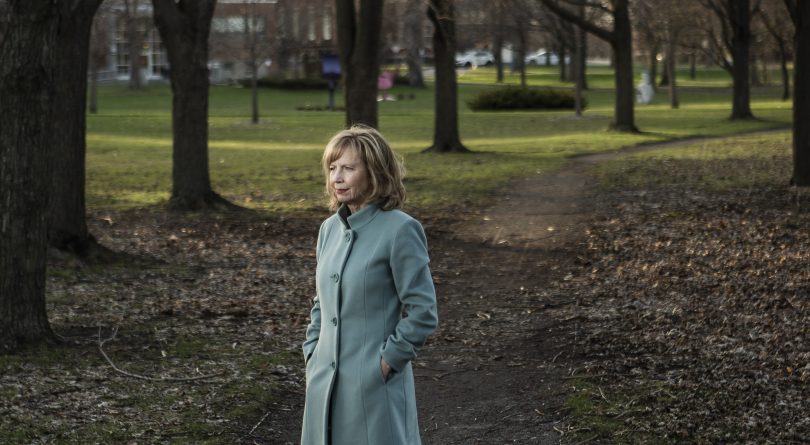 Doherty on the grounds of the Douglas hospital, where she met the patients who appear in her book (Photograph by Will Lew)

In 2009, Susan Doherty, author, businesswoman and inveterate volunteer, was writing a novel. In the inevitable way of ﬁrst novels, A Secret Music, set in the author’s native Montreal in the 1930s, had its autobiographical elements, including the fact “some family members in my father’s generation suffered from mental illness,” as she recounts in an interview. To research the era’s psychiatric treatments, Doherty went to the city’s Douglas Mental Health University Institute, once known as the Protestant Hospital for the Insane. “There are no holds on material from the past,” Doherty notes, and what she could see from the inter-war years, when there were still no medications for those in the grip of psychosis, profoundly moved her.

There was “ﬁlm of shock therapy, ﬁlm of women walking around the grounds with pieces of cloth stuck in their ears to block the voice-hearing experience, recordings of prayers broadcast over loudspeakers to patients who were suffering terribly” without relief—testimonies to the past made all the more disturbing, Doherty adds, by the realization that “shame and shunning” is still a dominant factor in the lives of the mentally ill. So she did what comes naturally to her: “I approached the volunteer department and asked, ‘How can I help?’ ”

READ: What do you do when your wife starts talking to the devil?

And that’s how Doherty embarked on a decade of extraordinary encounters, marked by friendships and simple human connection established with more than two dozen people. All of them, male and female, young and old, some now dead, shared a diagnosis of schizophrenia, one of the most terrible and terrifying diseases known, and were thereby shoved to society’s outer margins. Twenty patients, disguised by pseudonyms—more for their families’ sakes than their own—appear in The Ghost Garden, a book Doherty says she never set out to write. It was only after four years of immersion in her intense new relationships that she started to feel she was not simply knowledgeable enough but “meant” to write about the pain of “the walking wounded,” both the ill and their devastated kin. “I understand the psychotic aspects now, I understand delusions,” she says. “But really only after working with people for years and connecting with them and hearing their stories did I see the humanity. Most of us see only symptoms—a man raving at a mailbox is a broken mind, not a human being.”

Doherty has more than one aim in The Ghost Garden, from showing families the beneﬁt of early intervention when the ﬁrst signs of psychosis-to-come manifest themselves—the later the response, the deeper the psychotic episodes, the heavier the eventual medication, the narrower the life lived—to exploring something that has ﬁxated her since long before she ﬁrst walked into the Douglas: “How does childhood trauma affect us as adults? That was the big thing in A Secret Music and it is an ongoing theme in The Ghost Garden as well.” But none overarch the book as much as Doherty’s wish to express an essential truth, “to show the human being in every single person ravaged by symptoms of mental illness.” She has no credentials in the ﬁeld nor specialized training, although she is deeply read in the literature. Hers is a compassionate amateur’s take on an enormous and controversial subject, and all the more illuminating and valuable for it. 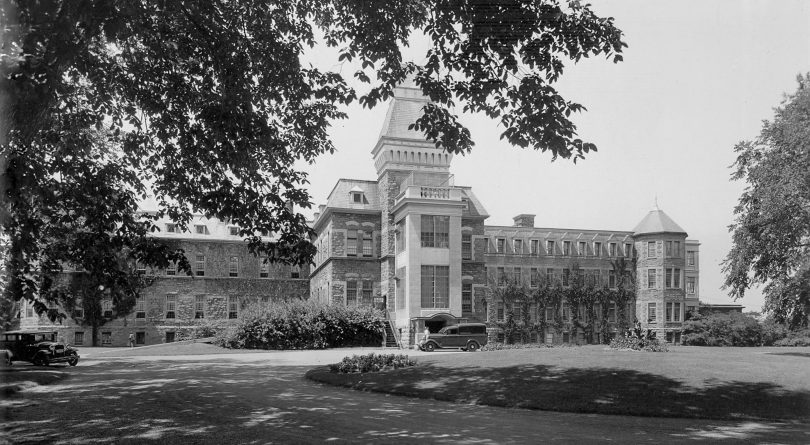 The Protestant Hospital for the Insane, as the Douglas was called in 1927 (Douglas Mental Health University Institute)

The through line of The Ghost Garden is provided by the life of Caroline Evans, the sister of a lifelong friend of Doherty and someone the author has known for more than half a century. Caroline’s slowly budding, then exploding, bouts of psychosis—one of which brought her into the media spotlight in 2002 after she poured boiling water into the ear of a sleeping woman in a bid to drive out the devil within—showcases all of Doherty’s themes. One of them is the gendered nature of care: Caroline’s sickness drove a wedge between the nine other Evans children, with her brothers turning their backs on her, and her sisters, some grudgingly, but two with almost saintly persistence, providing care and support. But it’s the 18 vignettes, as the author calls them, inserted between Caroline chapters and detailing Doherty’s encounters and exchanges with other psychotics met through her volunteer work, that prompt the sharpest questions.

Andrea—perhaps the dearest of Doherty’s new friends, the one she still “misses terribly” four years after her death—phoned Doherty daily for six years, sometimes 20 times a day, sometimes at 2 a.m., something that disturbed Doherty’s husband and children far more than her. One of ﬁve children of wealthy, wildly neglectful and substance-abusing parents—her father, according to Andrea, actually brought home cocaine for his wife and children on one occasion—Andrea had exquisite manners and gritty resilience. Her calls, especially the ones made late at night, were often about one of her most common delusions, that Mick Jagger had come through the window and raped her.

READ: A letter to friends with mental illnesses: ‘Your lives make my life worth living’

For Doherty, Andrea’s story touches on several aspects of mental illness and society’s response to it. The role of childhood trauma, possibly sexual in nature, cannot be ignored, the author argues. Almost all her vignette subjects have openly acknowledged episodes of loss or abuse that occurred before the symptoms of severe mental illness descended upon them in adolescence or early adulthood. Andrea, who was selling sex for drug money by 18, is one of them. Her endless troubles with landlords and her stints of homelessness show that, contrary to widespread assumption, affluence does not provide some schizophrenics with much of a soft landing. (Although it does—as Caroline’s 2002 brush with the law demonstrated—pay for highly competent criminal lawyers.)

Schizophrenia displays a durable and consistent occurrence rate, one per cent worldwide at all times, even though the details of its manifestation are culturally determined. James Tilly Matthews, whose 1810 case study from London’s Bedlam hospital is considered the ﬁrst description of the symptoms of paranoid schizophrenia, thought an “Air Loom”—a caricature of the new machines of the Industrial Revolution—was beaming rays into his brain. The understandable inclination to look with suspicion on new and unsettling technology has continued since. Later sufferers have blamed radio waves, spy agency implants and the internet for the voices in their heads.

Andrea was of an age to have been a teenage girl during the Rolling Stones’ glory days, when their lead singer was a prominent bad-boy sex symbol. “So when she says Mick Jagger raped her, what she is telling me is that in that moment she felt violated in some way,” says Doherty. “Delusion doesn’t have an immaculate conception, it’s a compilation of people, places and experiences that have been accumulated in the brain.” Very like Caroline’s frequent claim, made intermittently over decades, that her two sons had been fathered by Mel Gibson. “In the early days we all looked at these fanciful expressions as lies,” says Evans family friend Doherty. “We didn’t see them as the ﬁrst manifestations of psychosis. Now I know that’s Caroline actually saying, ‘Here I am, sick as a dog, but at one time, I was worthy of a man like Mel Gibson.’ ”

Then there is Andrea’s iconic place in Doherty’s thoughts on the causes and development of schizophrenia. Although no one has ever demonstrated the pathogenesis of the disease, how it originates and progresses, schizophrenia is almost universally considered a biochemical misﬁre of the brain, an organic illness with a strong genetic component. Doherty accepts that, given her own family members of the previous generation and the situation of Andrea’s family: every one of her four siblings has also cycled in and out of mental health institutions. (None of them are close any longer; at one point, Andrea and a sister, both homeless, bedded down on opposite sides of the same Montreal park, while Andrea and her younger brother, who ﬁrst shot up heroin at home together, used to pass wordlessly by each other in the Douglas’s underground tunnel system.) Small wonder Doherty has “entire weeks when I’m just absolutely convinced that schizophrenia is a genetically induced disease.”

READ: Why understanding the biology of our minds could cure autism and schizophrenia

But then what to make of Chantal, who appears in another vignette? She’s an identical twin, utterly convinced she’s 11 months pregnant with twins of her own, fathered by a CIA agent. Her sister is a wife, mother and successful lawyer. The genomes and their mysterious proclivities are the same, but one twin was sent down a road the other didn’t have to travel. And what to make of perhaps the saddest story in a book brimming with sad stories, the vignette of Tamslynn and Agatha, a profoundly sick teenage daughter and a slowly unravelling mother? Doherty met Agatha, “messy, pale, shaky,” and “looking like an in-patient at Douglas,” in 2017, after Tamslynn had run away from home and her mother seemed in danger of becoming another signiﬁcant statistic in mental health, a parent who self-destructs in trying to save their child—in her book, Doherty quotes a social worker who calls schizophrenia “a family illness.” One midnight in January 2018, Agatha phoned Doherty to tell her Tamslynn’s body had been found. She felt lucky to have got the news, because some parents never hear. But it was love, not genes, that linked mother and daughter—Tamslynn was adopted.

There is much in The Ghost Garden that deﬁes any kind of categorization, including the vignette of Aleks. Deeply and constantly psychotic despite heavy medication, obese, ﬁlthy and, at 50, still uncertain of his sexual orientation and gender identity, he’s intelligent and sometimes eloquent. It’s Aleks who gave Doherty’s book its title, by telling her his ghost garden was where he met his heart’s desire, actress Jennifer Love Hewitt, and “all the souls of the people I love.” Doherty may not have medical breakthroughs or expert advice to offer, but her book is a monumental success in what really matters to her: every one of the people described in it emerges as damaged but fully human.

This article appears in print in the June 2019 issue of Maclean’s magazine with the headline, “Finding the human amid psychosis.” Subscribe to the monthly print magazine here.