Soccer vs. hockey: Who plays what in Canada

Hockey is as essential to the Canadian identity as beer, maple syrup, politeness and Tim Hortons. Yet, new numbers suggest the beautiful game is challenging that status. Perhaps our bid for the 2026 World Cup isn’t so crazy after all:

Cups: The World vs. Stanley?

Canadians bought more than 29,000 tickets to this year’s World Cup matches, according to FIFA. We outranked all other nations that didn’t qualify, and were behind only 10 nations that did.

Although we’ve yet to see numbers, it’s likely more Canadians watched Germany play Argentina than watched the Stanley Cup final. Consider this: An estimated 3.1 million Canadians tuned in July 9 to CBC’s English-language broadcast of the Argentina-Netherlands semifinal—just 200,000 short of the 3.3 million who watched the final game between the Rangers and Kings.

Canada ranks ninth in the world when it comes to registered athletes in soccer. According to a 2006 FIFA census, one in 39 Canadians is enrolled in the sport at some level. By comparison, one in 40 Italians plays. In the United States, it’s one in 72. Germany ranked the highest with one soccer athlete for every 14 people.

Championed by young and new Canadians

Since at least 1998, soccer has ranked as the No. 1 sport for children between five and 14. At that time, 32 per cent of boys and girls participating in sports were playing soccer. In 2010, the number had jumped to 42 per cent. 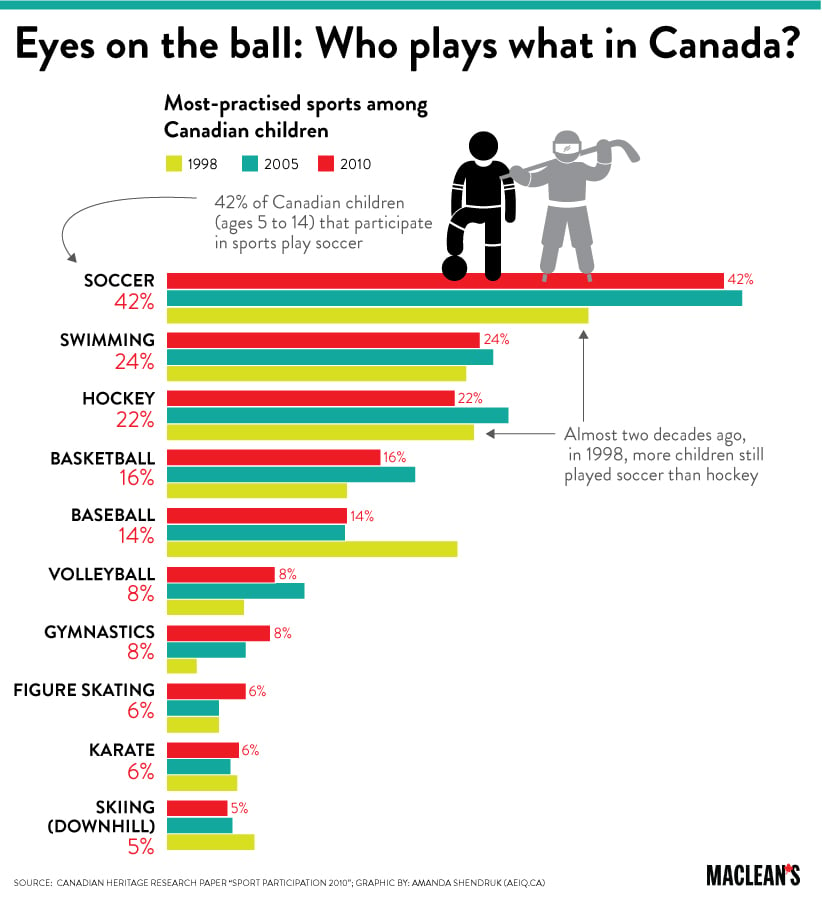 The Institute of Canadian Citizenship just released a national study exploring how new citizens participate in Canada’s sporting culture. The most popular team sport for new citizens is soccer—18 per cent report playing the game in their new country. The pastime follows running, swimming and biking. By comparison, only six per cent of new citizens have enrolled their children in hockey or baseball.

The high cost of sports:

One of many likely reasons the sport is so popular is that all you really need to play is a ball. A CIBC report released this month suggests the financial burden associated with sports can be a significant barrier to participation. Nine in 10 Canadians think sports are too expensive, and 82 per cent know a child who cannot participate due for that reason.