The Great Loop: The continental boating adventure even a pandemic can't stop

The global pandemic turned a 10,000-km adventure around North America into a surreal, isolating journey. With no option but to stay aboard their boats, these Canadians caught south of the border slowly made their way home. 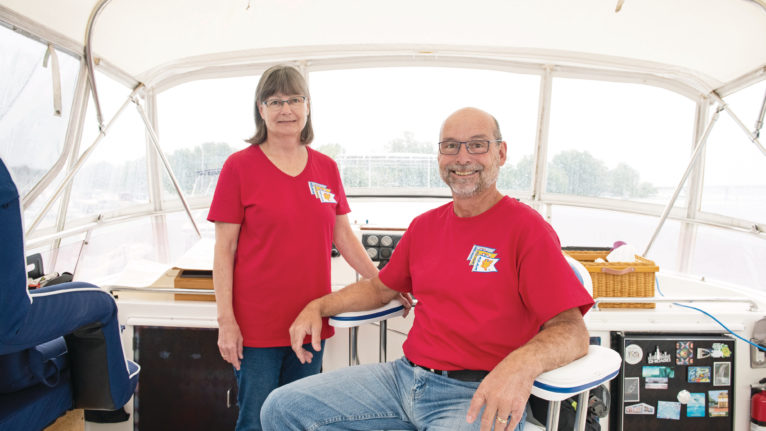 Karen and Jacques Campbell were in Miami the week everything changed. These two Canadians aren’t your typical snowbirds—they didn’t fly or drive to Florida. They weren’t staying at a resort. They weren’t planning to stick around. And with a straight face, they call themselves loopers.

The Campbells had been living on their 43-foot boat, a home away from home, for nearly a year at that point. On March 12, after a relaxing trip to the Bahamas, they easily cleared customs off the Florida coast just a day after the World Health Organization declared the coronavirus a global pandemic. As they watched lockdowns spread across the continent and took stock of their predicament, the couple from Carleton Place, Ont., was midway through a 10,000-km maritime odyssey.

They’d come a long way from their home waters in the Rideau Canal system aboard the Gyp C, a motor-powered trawler they named after the radar station at Gypsumville, Man., where they first met. The Campbells were travelling the Great Loop, an extensive network of rivers, canals and lakes that stretches deep into the heart of North America, its veins connecting Port Hope, Ont., to Pittsburgh, Pa., and Montreal to Mobile, Ala. The water is managed by state power authorities in some places, the U.S. Army Corps of Engineers in others, and Parks Canada north of the border. A hodgepodge of industrial, commercial and recreational waterways dredged, carved and connected over centuries eventually produced a massive loop around the eastern half of the continent.

But the pandemic rendered so-called loopers hermits at sea. Tourist stops were reduced to ghost towns. The Campbells’ boat became a sanctuary, a place to self-isolate for weeks at a time. And they were about to learn construction delays would maroon them south of the border until August. For the Campbells, a retirement adventure morphed into a surreal journey unstuck in time.

America’s Great Loop Cruisers’ Association (AGLCA) is a boating subculture with thousands of members—given the time involved to circle the continent in a boat, they are often retirees. The AGLCA’s fraternity of loopers host each other, trade tips and keep tabs on fellow boaters as they poke around tiny landings and massive marinas hitched to the side of small, riverside towns and vast, coastal megacities.

Most loopers travel in the same direction, counterclockwise, spending summers in Canadian waters—primarily the Trent-Severn Waterway, which cuts a path through Ontario’s cottage country—before heading south for the winter. That route isn’t just seasonally favourable. Boaters save fuel by riding strong river currents south to the Gulf of Mexico, and powerful ocean currents back north.

The Campbells started their adventure on June 20, 2019, in the Rideau Lakes, not far from their Carleton Place home. They chugged down to Kingston, Ont., and across the Murray Canal to Trenton, Ont., where they entered the Trent system. From there, they navigated Georgian Bay, the North Channel and then Lake Michigan.

In September, they escaped those choppy waters in Chicago, and travelled a succession of rivers south, starting with the barge-filled Illinois River that empties into the mighty Mississippi, a roller coaster of a thick, muddy river the Campbells shared with massive tows that spawned rolling, five-foot waves. They struck swirling eddies, sometimes with little warning, that twisted Gyp C at right angles.

Then came the blue water of the Ohio River, where Karen recalls the stark colour change “felt like we were crossing a border.” More tributaries followed as the Cumberland River gave way to the Tennessee, where the Campbells embarked on a 1,400-km October detour to Chattanooga past six Great Depression-era dams with locks as long as 1,000 feet—almost 10 times the length of the modest Rideau locks back home.

By November, they’d reached the Gulf of Mexico by way of the Tenn-Tom Waterway and Tombigbee River, which runs through Alabama, then headed east under the shelter of the Intracoastal Waterway built to protect boats from rough seas. They joined two other boats on a 20-hour overnight sprint, from 3 p.m. to 11 a.m., across the gulf to Florida’s west coast to more easily navigate coastal crab traps in the morning light. They took shifts at the helm, fuelled by coffee and music from dusk till dawn.

Some loopers hug the Florida peninsula, but the Campbells cut across the Okeechobee Waterway in time to spend Christmas in Fort Lauderdale. On New Year’s Day, they crossed to the Bahamas. It was on their return to Florida two months later when the Campbells met the pandemic, and found themselves in a foreign land that most Canadian snowbirds were trying to escape as quickly as possible. 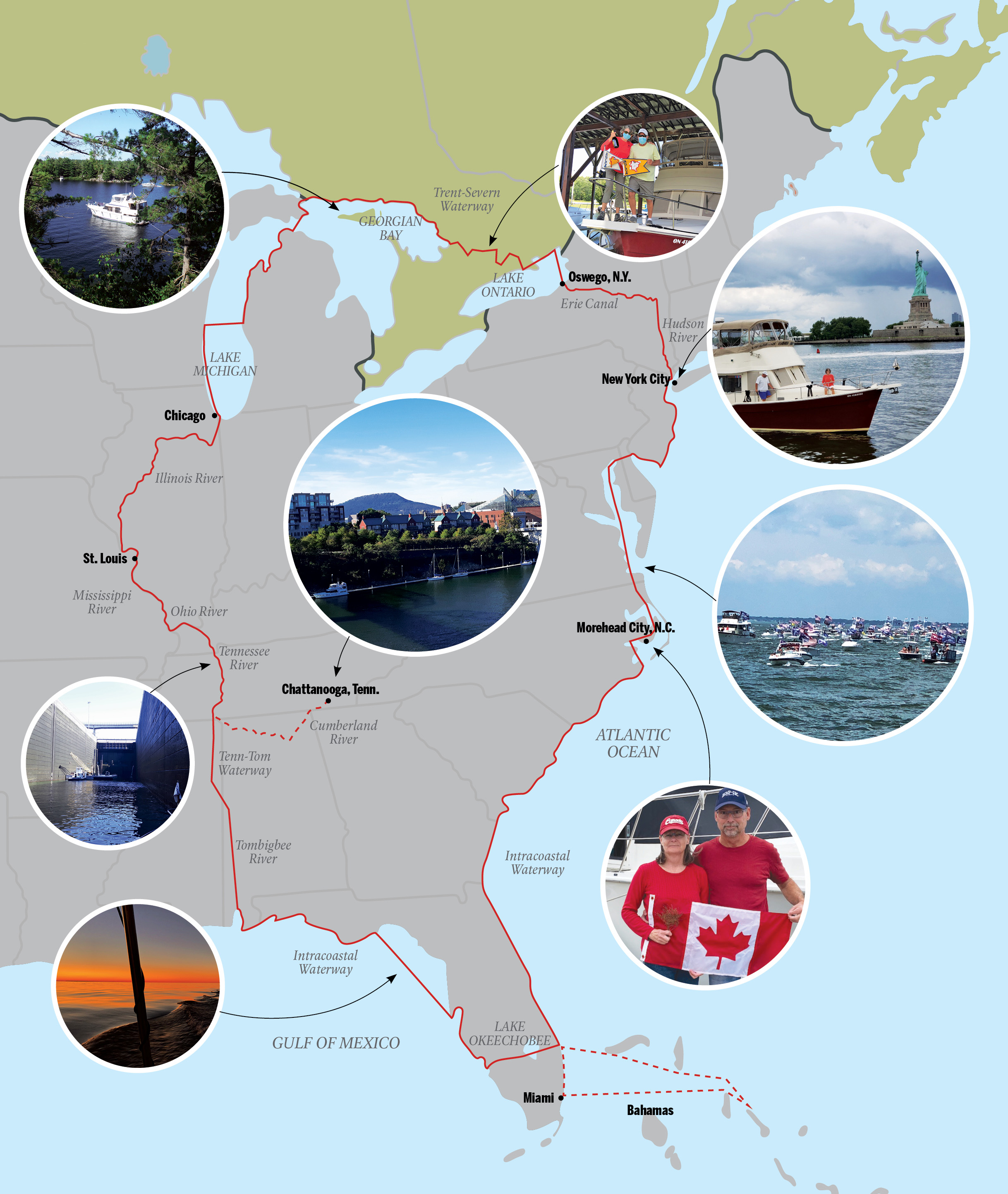 (Photographs courtesy of Karen Campbell and Barb Hankinson). Tap or click for a larger version.

Wayne and Barb Hankinson set off from the Lagoon City marina on Lake Simcoe in Ontario on June 23, 2019, just three days after the Campbells’ own journey began a few hours’ drive to the east. Their looper boat was Red Dog, a 34-foot Mainship, and they were eager to make new friends. “We’re people people,” Wayne says, so off they went.

The Hankinsons and Campbells travelled a nearly identical route, though Wayne and Barb typically tracked behind Karen and Jacques—and were still in the Bahamas when the pandemic hit. By May, they returned to Florida and joined the phantom tour of the east coast familiar to so many other loopers, a litany of shuttered museums and deserted main streets in towns normally bustling with tourists.

“We were totally alone,” says Karen of those early months in Florida, Georgia and the Carolinas. “There was nobody else out on the water. It was very isolating.” As death tolls rose onshore, though, loopers were safer than many Americans.

They eventually encountered other people. In Norfolk, Va., the Hankinsons ran into a boat parade packed with hundreds of raucous Trump supporters, a popular election-year phenomenon up and down the coast that reminded the Canadians that even boating culture is politicized south of the border.

As spring drew to a close, the Campbells and Hankinsons were itching to get home but the pandemic had concocted a final, exhausting obstacle. COVID-19 shutdowns had delayed maintenance on several locks on the Erie and Oswego canals in central New York, closing them to loopers who had no other viable alternative route to Lake Ontario. A small flotilla of Canadians congregated at a marina on the Hudson River, just downstream of the Erie Canal. All they could do was wait for good news.

By August, the Campbells and Hankinsons, well past a year on the water, were waiting for one final lock to open before they could get moving home: the seventh lock on the Oswego Canal, less than two kilometres from Lake Ontario. Finally, the state corporation that operates the system announced that service would resume on Aug. 10. That morning, the Campbells cleared Oswego.

When they crossed into Canada, Karen described the moment as “anticlimactic” as it dawned on her that, thrilled as they were to be back in familiar territory, their days of exploring new water had come to an end. Three days later, the Hankinsons crossed the lake.

RELATED: The sinking of Leviathan II

As they waited out their two-week quarantine back at Lagoon City, the Hankinsons did the math on their trip. They’d been gone 425 days, covered 10,492 km, guzzled 9,932 litres of diesel fuel and passed through an astonishing 112 locks.

Both couples finally celebrated a moment they’d awaited for 14 months. Every first-time looper flies a white flag with the AGLCA logo, known as a burgee. The Hankinsons popped a bottle of champagne as they proudly affixed a gold version to their bow, signifying a completed loop. Mission accomplished.

As the Campbells and Hankinsons basked in their achievement, another couple on the other side of Canada, Bob and Sharon Clift, stewed in frustration. Earlier this year, the aspiring loopers had finished their own whirlwind adventure at the outset of the pandemic—only they’d barely set foot on their boat before the coronavirus forced them to abandon their dream indefinitely.

The couple had driven to Florida from Nelson, B.C., where they’d sold their house in December. Bob tinkered with their boat, which he’d bought in Florida before they arrived, for several days. But after just a single short sea trial on the water, their new home was back in dry docks outside Fort Myers.

With the Canada-U.S. border closed and insurance companies cancelling travel insurance, the Clifts lost their health coverage. Sharon, who is diabetic, couldn’t risk a serious encounter with the American health-care system.

With no coverage, the Clifts packed up their car and headed north to Orillia, Ont., where they spent a month with their two children and three grandkids. Bob, who worked as a radio technician for the RCMP until last August, asked to return to work. The Mounties found him a gig in Nanaimo, B.C. On April 23, they headed west to a modest apartment on Vancouver Island. The length of their unintentional circle tour of North America clocked in at nearly 12,000 km.

“It is hard to describe the frustration,” Bob tells Maclean’s. “We sold everything, including our home, so we could buy a boat and complete the loop. Now we are stuck in a basement apartment.”

The Clifts plan to get back to Florida when it’s safe, climb aboard their boat and finally complete the loop so abruptly foiled by the nasty virus. But they’re taking their time. “I am not in a huge hurry to fly to Florida in the middle of an out-of-control pandemic in hurricane season,” says Sharon.

Once they’re out there, finally on the path to circumnavigation, that prized gold burgee might only be the beginning. “I figure,” says Bob, who yearns to be on the water, “we’ll just keep going around.”

This article appears in print in the October 2020 issue of Maclean’s magazine with the headline, “Life’s ‘Great Loop.’” Subscribe to the monthly print magazine here.