The hidden power of that famous #HomeToVote photo

The defining image of the Irish abortion referendum was actually snapped during a demonstration two years ago. It endures because so few photos tell women's stories so well 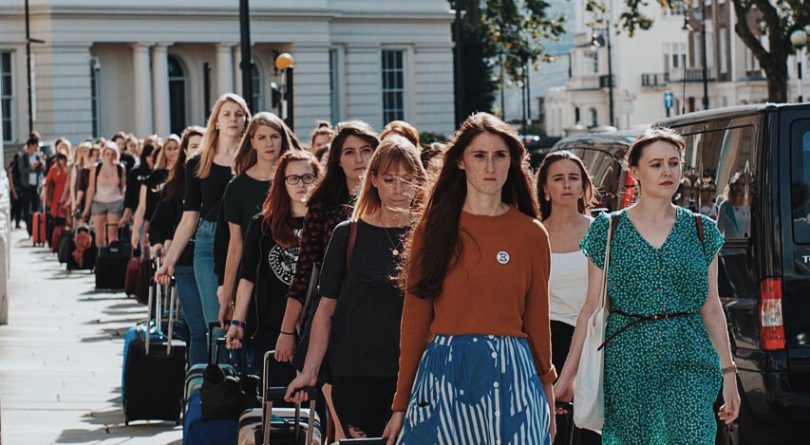 Women protest in front of the Irish Embassy in London, England in 2016. (Alastair Moore/London-Irish ARC)

If one image symbolized the “Yes” vote in the Irish referendum overturning that country’s abortion ban, it was a photograph, circulated widely on social media, of a seemingly endless stream of women, walking in pairs, rolling luggage behind them. Many who posted the pic clearly assumed it was a news photo documenting a few of the thousands of women who returned home to Ireland to vote, some from more than 8,400 kilometres.

The photo was taken at a 2016 protest in London, in front of the Irish Embassy, against Ireland’s Draconian abortion laws, edicts that included anyone found in possession of the abortion drug Misoprostol facing 14 years in prison, as did anyone who assisted in an illegal abortion. The women brought luggage with them to pay homage to the more than 170,000 Irish women forced to travel to U.K. and Netherlands for abortions between 1970 and 2016. Alastair Moore, the photographer who took the photo, recounted how moved he was by the event in a recent interview: “When [the women] started moving, the sound of the luggage wheels on the footpath was deafening. It was incredibly impactful—it had this feeling of a growing momentum and anger at injustice, but it was so civil.” Shortly after, the London-Irish Abortion Rights Campaign was formed. One of its co-founders, Hannah Little, who appears in an orange sweater at the top of the picture, was in fact unable to vote in the referendum, having lived in London for more then five years; Irish citizens lose their vote after 18 months living outside of the country.

The fact the photo dates back years makes it an even more powerful symbol of the historic vote; it reminds us of the years of activism and organizing leading up to it.  It struck such a nerve because it literally put the lens on women and their stories, in this case 170,000 of them. We’re not used to that, as Sarah Silverman pointed out recently in a GQ interview: “Women are so keenly aware of the male experience because our entire existence had to be kind of through that lens. Whereas men have never had to understand the female experience in order to exist in the world.”

Female experience, specifically horrific female experience, propelled the repeal of the 8th Amendment in the Irish constitution. The tragic story of Savita Halappanavar, a 31-year old dentist who died in 2012 in a Galway hospital as the result of a septic miscarriage, was galvanizing. Though her life was in danger, doctors denied Halappanavar’s request for an emergency termination because they detected a faint fetal heartbeat. A 2015 piece in The Guardian enumerated the risks taken by women who couldn’t afford to travel to terminate pregnancies—one swallowed floor cleaner and bleach, another took a pills from her medicine cabinet, another asked her boyfriend to punch her in the stomach. (Canada saw a similar decades-long underground mobilization to make abortion available in Prince Edward Island in January 2017, the first time in 35 years. Before then, women from P.E.I. had to pay to travel to New Brunswick; women living in Northern or rural communities still have to travel to terminate pregnancies.) The referendum also serves to remind of the multiplicity of women’s stories. Arlene Foster, a woman, is first minister of Northern Ireland which now has the most restrictive reproductive rights in Europe: a woman who’s raped and gets an abortion in Northern Ireland faces harsher penalties than her rapist does.

Other images from the Irish referendum, on both the Yes and No sides, saw men centre front. The heart-warming images of “Grandfathers Say Yes”,  saw a lot of play, reminding us that men of all ages also supported women’s reproductive choice. One controversial ad placed by the “No” side, tellingly, presented a man as hero: it featured a photo of a fireman saving a girl away from a fire (read: hell). “Men protect lives,” the copy read. “Our future is in their hands. Vote No on May 25 and save babies from abortion.” The message—women cannot be trusted—was repudiated by the referendum outcome. 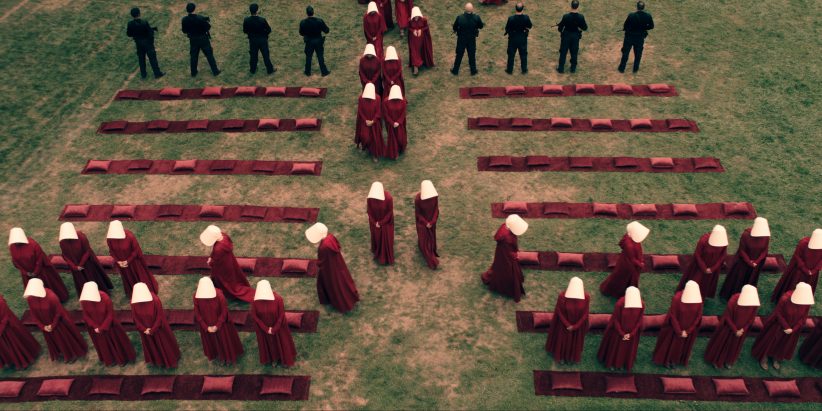 (Thousands of years of men’s stories in the spotlight is difficult to undo, clearly, as we’re seeing in the #MeToo aftermath. The same day Harvey Weinstein announced he was turning himself in to New York police came news that playwright David Mamet—who hadn’t written a play in years—had just turned in his first draft of a play about the former producer, with John Malkovich tapped to play the Weinstein character. The far more interesting story, and drama, is that of actor and activist Asia Argento, who reported Weinstein raped her and defiantly challenged entertainment industry predators at a recent Cannes gala.)

The powerful 2016 #HomeToVote photo doesn’t exist simply as an artifact of a historic vote, however. It also offers eerie foreshadowing of another famous image of women walking in twos seared in the cultural imagination via the 2017 Hulu adaptation of The Handmaid’s Tale: handmaids in their crimson robes and white bonnets enslaved as working uteruses, women with no choice at all. As such, the defiant #HomeToVote photo provides a timeless reminder of how fragile these rights can be.