Kaillie Humphries on competing against men in bobsleigh, the attitude necessary for winning—and what it’s like to crash 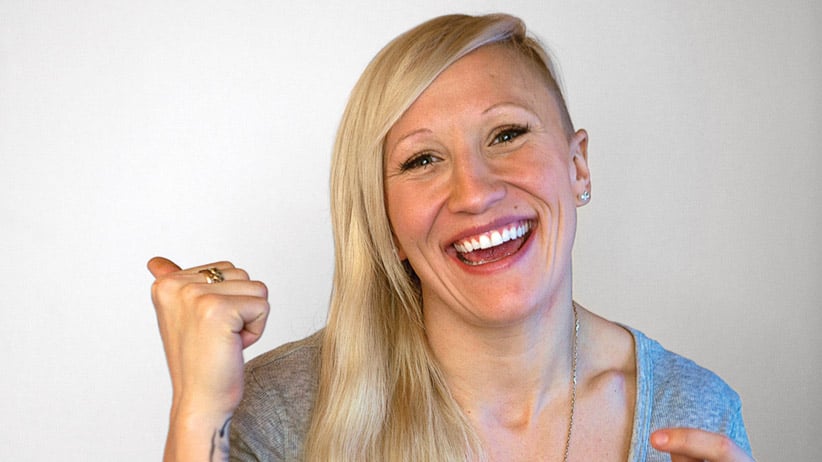 Growing up in Calgary, Kaillie Humphries was often bullied. The preferred term used against her was “bitch.” But her lifelong dream wasn’t winning a popularity contest. It was competing in the Olympics. After back-to-back gold medals in Vancouver and Sochi for the women’s 2-man bobsleigh, her new goal became to compete against men. Last month, she made history as one of the first women to pilot a four-man bobsleigh team in a World Cup event.

Q: What was the process like pushing to compete in the 4-man competition?

A: In 2012, I got to the point in my career that I needed and wanted challenges. Bobsleigh is very much an old boys’ club. I started asking questions, dropping hints [about recruiting a team]. When we had a team camp, I’d go to the guys that only slide in 4-man—side crew guys or brakemen—and I’d say, “When you’re on my team, then you can eat extra food. Be a little bit bigger.” [In Olympic regulations, the weight of crew and equipment cannot exceed 630 kg.] It wasn’t until last season that it became a goal of mine. It was no longer just this dream. Last year, I was contacting the president of our international governing body and really trying to push. “What do I need to do? How can we make this happen?” Trying to make it a positive for the sport and not just about me. Finally this summer, they allowed that to happen. It caught me off guard. I was prepared to fight tooth and nail for years and years, but it really only took about two years of pushing. Myself and [American] Elana Meyers, the other girl competing with the men, both had to qualify during our national selections. We had to be one of the top three sleds within our country. We had to qualify just like any man would, doing five races on three different tracks on two continents. It’s been a very busy pre-season. 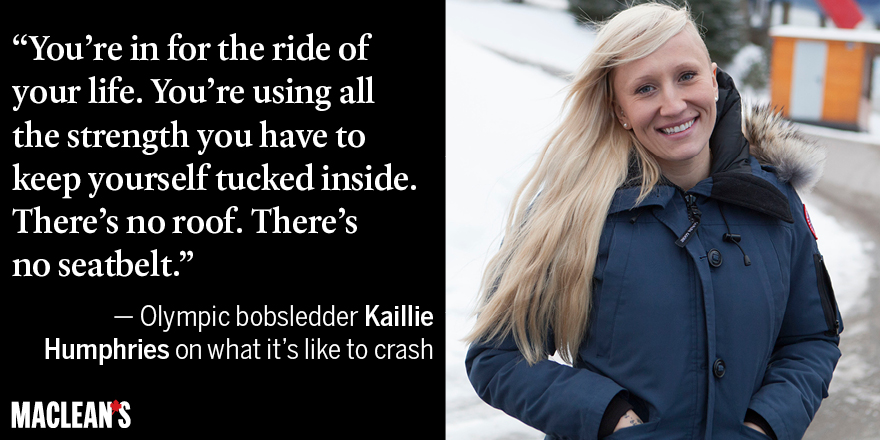 Q: What are the challenges when competing against men?

A: The start is very important. Being even a tenth of a second slower at the start, it’s multiplied by three at the bottom if everything is the same. That’s a lot of time to make up each run. Are women as strong or as fast as men? No. If I have to make up that deficit at the start, that could be a major disadvantage. But a good pilot, the skill of driving makes no difference if you’re a male or female.

Q: Despite your multiple gold medals, many of the top Canadian men are already on a bobsleigh team. What’s it like recruiting?

A: That posed a bigger problem than I thought. According to accolades, I’ve been the most successful. And so you assume that the guys would jump at the opportunity of being in your sled. At the same time, you get that hesitation because I’ve never driven 4-man before. It’s been a lot of proving.

Q: Did it feel different as you sat down in the driver seat for that historic race in the 4-man?

A: Yes. Not so much emotionally, but the pressure was different. You know it’s such a big step, not just for yourself but also for women in sport. I tried to play it cool. I tried to be super calm and pretend it was just an average thing, like I do with most major races, but it definitely got to me. Understanding all the women’s pioneers in bobsleigh before me, you’re also racing for them. I’d be lying if I said I wasn’t happy when it was over.

Q: Yet in the lead-up to the day, you were downplaying its historical significance.

A: When bobsleigh was first invented, back in the early 1900s in Switzerland, there used to be five people in the sled and one of them had to be a woman. It’s hard for me to take credit for being the first to ever do it because there have been plenty of girls who have slid with guys in previous times. What makes this different is it is head-to-head competition.

Q: How does the new top speed feel?

A: It’s fun. The biggest challenge I find is switching between 2-man and 4-man. The two-man feels really touchy. It’s like driving on eggshells. You can’t steer too much or too hard. Then you get into the four-man and you have to be decisive. If you are, the ride is so much smoother and it’s so much more fun. You can feel the acceleration and you’re not whipping around as much. There’s more stability to the sled. 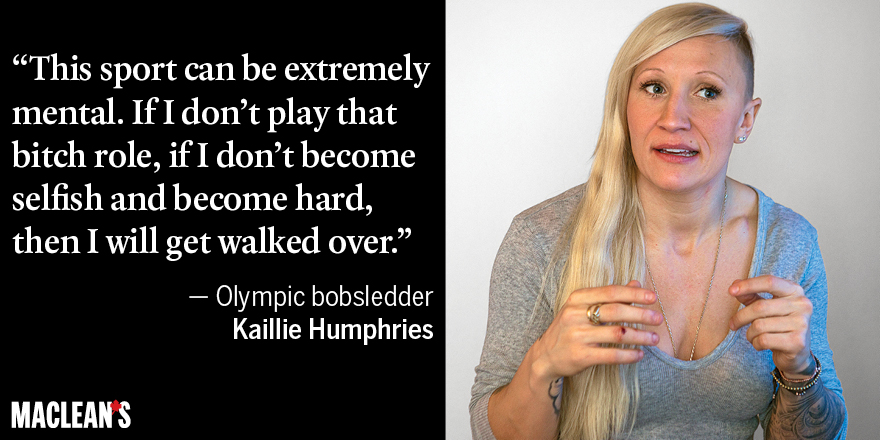 Q: Have you crashed in 4-man bobsleigh yet?

A: I have, actually. It was in Calgary, in the official training right before the race. Out of the last corner, [we] just kind of victory-rolled it. The sled is half on the edge of the corner, half down. You end up on two runners for five or 10 metres. It’ll either smack back down on all four runners or it’ll go the other way. You roll and crash right over the finish line, and you’re on your side all the way up the braking stretch. I made a little mistake, came down too early. We mostly just ate a lot of snow. For most new people, the fear of crashing is worse than doing it. It looks way harsher on TV.

Q: What’s going through your mind when you crash?

A: It sucks. You just go into survival mode. It goes really quiet for a split second. Nothing is on the ice. Nothing is touching. It’s only for a quarter of a second and you’re like, “Uh oh.” All of a sudden you’re upside down and you’re just getting beat around. And the sled does go all the way to the bottom. It doesn’t stop. So you’re in for the ride of your life. You’re using all the strength you have to keep yourself tucked inside. There’s no roof. There’s no seatbelt. Sometimes you see guys kick out of the sled, which can be dangerous too, because if you are not 100 per cent sure of where you are and the sled comes up, it can crush you against the wall. Broken stuff happens. More than anything, our biggest thing when crashes happen is just getting burnt. You’re going so fast and it’s just skin on ice. So, yeah, crashing sucks. But compared to alpine guys, when they crash, they’re going just as fast and they don’t even have a sled. They’re eating it into a fence where it cheese-grates you.

Q: You actually started off as an alpine skier, but then changed to bobsleigh. Why the switch?

A: Because I was not good [laughs]. My goal since I was seven was to go to an Olympics. It first started after watching Mark Tewksbury win his gold in the ’92 Games in Barcelona. I knew at about 16 I was never going to go to an Olympics in ski racing. I was coming last in races and I had a few crashes. Reality sets in. Training at what was then Canada Olympic Park, I had seen the bobsledders around the track. I had always been bigger [than] most girls. I’ve always had a big butt, fairly big legs. For me, it was finding another sport for the physical skill set that I have. It was between bobsleigh and speed skating. My dad and I just got online and looked up different schedules. Bobsleigh was the first camp to become available and I just tried out.

Q: You almost did not compete for Canada at the Olympics.

A: When I first got into this sport, I was fairly young for a bobsledder. I was 17. I ended up being a brakeman for the first three years and the goal for the 2006 Olympics became a reality. But I ended up rolling my ankle on a garden hose and tore all the ligaments. Unfortunately that left the door open and Heather Moyse walked in. Heather got to race. I did not. I was a spare for Canada-1. It was hard, having to help everybody else achieve their goals and dreams. And you’re supposed to do it with a smile. Everyone will tell you it’s still a good thing to be a spare at an Olympics, but when you’re that person, you just want to shut down. I definitely went into a bit of a depression. It took a lot of support from my family to get me back in the sport. I did not want anything to do with Canada, anything to do with bobsleigh again. I was mad at the world. I was chatting with my [then] fiancé. He said, “Why don’t you just come to Great Britain and compete for us? We’re getting married anyways and hopefully you can get your citizenship within four years.” I thought about it. Had driving not worked, I probably would have gone to Great Britain. Just to compete. But driving kind of clicked. I had so much fun on the development circuit. I had brand-new friends, a brand-new appreciation for the sport and how fun it could be. Everything started to fall back into place.

Q: You tweeted a list of New Year’s resolutions and No. 3 was “sometimes being a bitch is necessary.” What did you mean by that?

A: As a kid growing up, I was bullied. It’s something I’m very passionate about changing in this world, but it’s something that made me tough. I was definitely not the popular kid growing up. I was pretty much a loner. My personality is fairly girly-girl. I like getting dressed up and I like makeup. At the same time, I have my intense side.This sport can be extremely mental. If I don’t play that bitch role, if I don’t become selfish and become hard, then I will get walked over. As long as it’s not a detriment to everybody else, if I need to be that bitch in order to be the best I can possibly be, I will do it.

A: There is so much pressure on what you’re supposed to name it. Thorfin is the name of my two-man sled. That was the name of my great-grandfather. But this new four-man sled, I don’t know. It’s like naming a kid. Once you name it, it’s named. You’d better like it. At least with babies, you can get baby name books. There are no sled-naming books.