The Jian Ghomeshi verdict is in. But the story isn't over.

When Ontario Court Justice Horkins read his judgment in R. v Ghomeshi this morning—acquitting the former CBC radio host of four counts of sexual assault and one count of overcoming resistance-choking—he was speaking to an audience far beyond the jammed courtroom. Clearly his words were intended to reverberate publicly in that other court that runs parallel to (and usually at odds with) the jurisdiction over which he presides: the court of public opinion. And reverberate his words did, eliciting the inevitably Rorschach reactions that have accompanied the Ghomeshi trial from day 1.

The 25-page ruling—largely a recap of defence lawyer Marie Henein’s “greatest hits” during cross-examination (down to quoting her accusing one witness of “playing chicken” with the justice system)—is more stringent than nuanced. Its focus is squarely on the fact that a finding of “guilt beyond a reasonable doubt” was rendered moot by the three witnesses’ lack of “reliability” and “credibility”: “The success of this prosecution depended entirely on the Court being able to accept each complainant as a sincere, honest and accurate witness,” Justice Horkins stated. And, alas, they weren’t: “Each complainant was revealed at trial to be lacking in these important attributes.” He went on to clarify: “The evidence of each complainant suffered not just from inconsistencies and questionable behaviour, but was tainted by outright deception.” There were no dark nights of the soul for him, it appeared: “I have no hesitation in concluding that the quality of the evidence in this case is incapable of displacing the presumption of innocence.” As the verdict was read, a palpable relief was evident among Ghomeshi’s family sitting in the front row; Ghomeshi himself watched without expression.

It wasn’t the witnesses’ behaviour after the alleged attacks that was the problem, the judge ruled; it was the fact they omitted information, were inconsistent in their testimony and lied on the stand.  Yet he also questioned the fact that the complainants “engaged” with Ghomeshi after the assaults, which both Crown and defence defined as normal behaviour after a sexual assault. “Each complainant in this case engaged in conduct regarding Mr. Ghomeshi, after the fact, which seems out of harmony with the assaultive behaviour ascribed to him,” Horkins wrote. “In many instances, their conduct and comments were even inconsistent with the level of animus exhibited by each of them, both at the time and then years later. In a case that is entirely dependent on the reliability of their evidence standing alone, these are factors that cause me considerable difficulty when asked to accept their evidence at full value.”

The first witness, L.R., seemed “rational and balanced,” under examination by the Crown; under cross-examination by the defence, “the value of her evidence suffered irrefutable damage.” She claimed Ghomeshi was driving a yellow VW, the “Disney car,” when in fact he’d bought a similar model seven months later. She’d failed to mention her hair extensions to police and had uttered numerous inconsistencies in media interviews. 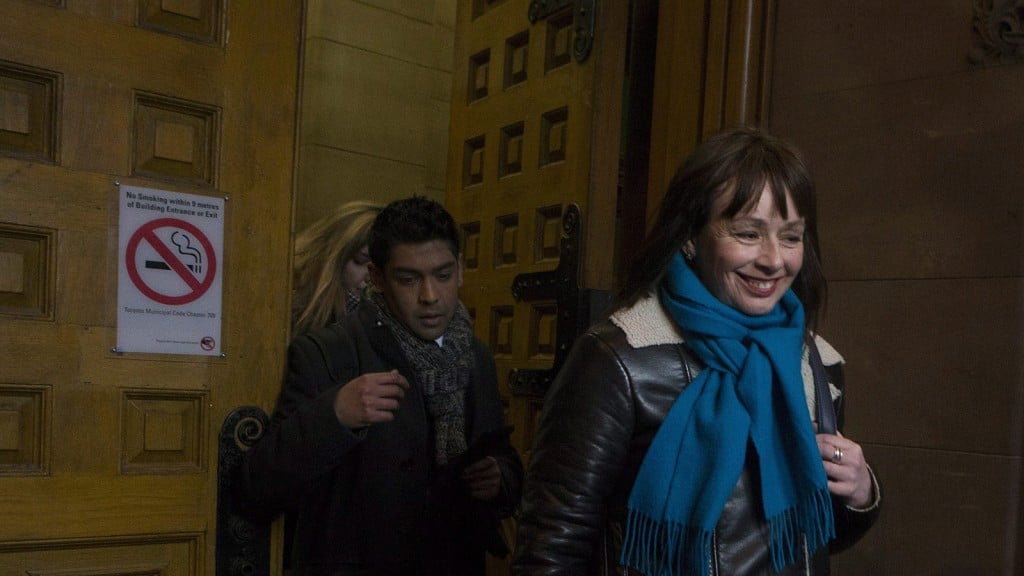 Lucy DeCoutere leaves the Toronto courthouse following the reading of the verdict in the Jian Ghomeshi sexual assault trial on Thursday, March 24, 2016. DeCoutere was one three women who accused Ghomeshi of sexual assault, and the only one to go public with her accusations. THE CANADIAN PRESS/Chris Young

Lucy DeCoutere, the only complainant to waive the publication ban, was subject to the fiercest judicial scolding: she was criticized  for “deceptions maintained under oath,” “suppression of evidence” and “a wilful carelessness with the truth.” The high public profile she cultivated before the trial also came under fire, with reference to her hiring a publicist and conducting 19 media interviews, including one in which she “analogized her role in this whole matter to David Beckham’s role as a spokesperson with Armani.” The judge was not amused by DeCoutere referring to criminal court as “…theatre at its best,” and as a place where someone with her acting background could excel (“…Dude, with my background I literally feel like I was prepped to take this on, no s–t,” DeCoutere boasted to the third complainant). A swipe was also taken at the language employed by DeCoutere and the third witness in their 5,000 online exchanges which gave rise to accusations of possible collusion: “They expressed their top priority in the crude vernacular that they sometimes employed, to “sink the prick,… ‘cause he’s a f–king piece of s–t.’”

The judge went one step further to speculate whether DeCoutere’s testimony had been compromised by her high profile as a victims’ rights advocate which brought her “massive attention”: “the manner in which Ms. DeCoutere embraced and cultivated her role as an advocate for the cause of victims of sexual violence may explain some of her questionable conduct as a witness in these proceedings,” he ruled. “Ms. DeCoutere felt that she had invested so much in being a ‘heroine’ for the cause that this may have been additional motivation to suppress any information that, in her mind, might be interpreted negatively.” He admitted he had no grounds for the assertion: “I do not have sufficient evidence to conclude that this was in fact a reason for suppressing evidence, but in light of the amount of compromising information that she willfully attempted to suppress, it cannot be ignored as a live question.”

The fact the first witness contacted Ghomeshi after the alleged attack (she testified she didn’t remember doing so and that even hearing his voice traumatized her) elicited similar censure, even while acknowledging that it is not unusual for this to happen in sexual assault cases. “The expectation of how a victim of abuse will, or should, be expected to behave must not be assessed on the basis of stereotypical models,” the judge ruled. “Having said that, I have no hesitation in saying that the behaviour of this complainant is, at the very least, odd.” 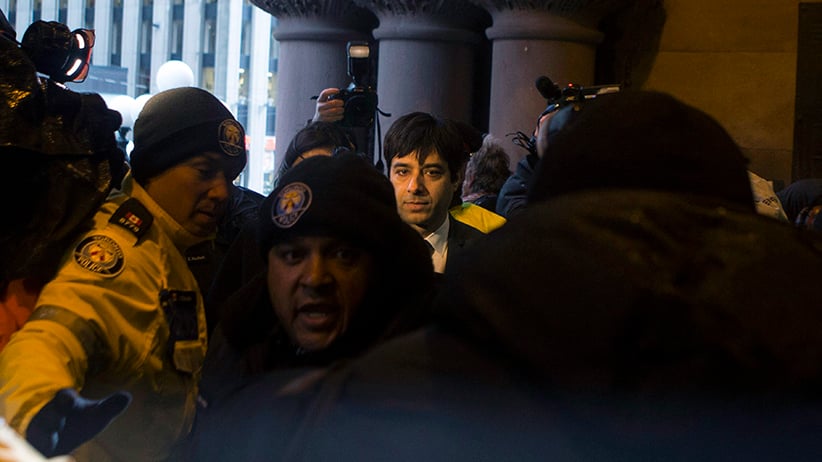 Jian Ghomeshi arrives at a Toronto courthouse Thursday, March 24, 2016 for the verdict in his trial. THE CANADIAN PRESS/Chris Young

The judgment also exists as a pointed response to the scene occurring Thursday morning outside of Toronto Old City Hall as protesters stood in freezing rain, chanting and brandishing #IBelieveSurvivors signs. Acknowledging that “the courts must be very cautious in assessing the evidence of complainants in sexual assault and abuse cases,” Justice Horkins warned that “[c]ourts must guard against applying false stereotypes concerning the expected conduct of complainants.” These stereotypes extend to believing that all sexual assault victims tell the truth, he said: “I have a firm understanding that the reasonableness of reactive human behaviour in the dynamics of a relationship can be variable and unpredictable. However, the twists and turns of the complainants’ evidence in this trial illustrate the need to be vigilant in avoiding the equally dangerous false assumption that sexual assault complainants are always truthful. Each individual and each unique factual scenario must be assessed according to their own particular circumstances.”

Related: Witness One on what she wishes she’d known before testifying in the Ghomeshi trial

On its face, the remark is unassailable; if we reflexively believed everyone who came forward with an allegation of sexual assault, there would be no need for sexual assault trials. As in all criminal allegations, false statements of sexual assault occur, though the estimated number is somewhere between two and eight per cent, according to the FBI. Why the judge felt the need to highlight this point amid concerns that the Ghomeshi trial will have a chilling effect on victims not coming forward for fear of not being believed is unclear. Early in the trial, in fact, Justice Horkins proved himself sensitive to that very issue when he denied a media lawyer’s application for the court to make public a photograph sent by the first witness to Ghomeshi in which she’s wearing a bathing suit.

The fact the witnesses discredited themselves resulted in virtually no time spent on discrepancies in accounts of the alleged assaults or consent. Where the judge made three mentions of DeCoutere and Ghomeshi sharing a karaoke duet of “Hit Me Baby One More Time,” “consent” was only mentioned once when defining “sexual assault.” It was also noted that the third witness, S.D., lacked clarity in her description of Ghomeshi allegedly choking her: she “was not particularly precise or consistent in the details of the alleged assault,” he said, quoting her confusion remembering how long the assault took place. “Seconds. A few seconds. Ten seconds. I don’t even—I don’t—it’s hard to know. It’s hard to know.”

One line was drawn by Justice Horkins: “My conclusion that the evidence in this case raises a reasonable doubt is not the same as deciding in any positive way that these events never happened,” he ruled. “At the end of this trial, a reasonable doubt exists because it is impossible to determine, with any acceptable degree of certainty or comfort, what is true and what is false.” That sentence, no question, will be the basis of discussion surrounding the Ghomeshi trial in the weeks, months, even years to come.