Dressy sweatpants may be the most unlikely fashion rehabilitation ever. (Once you get past the sticker shock.) 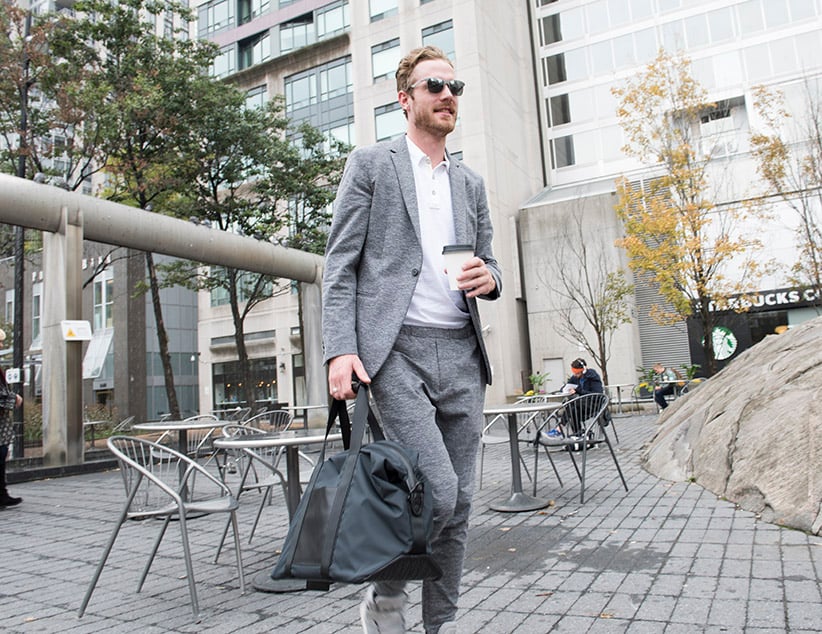 Zach Goldstein wore a lot of sweatpants in college. His favourite pair belonged to his mom; he’s a bit shorter than most guys and they didn’t drag along the ground. After earning a degree in economics from the University of Michigan, Goldstein wore a suit every day for work in finance, but the first thing he’d do once he got home was put on some comfy clothes.

Yet there was a problem.“There was nothing I felt good about that I could put on to walk to Whole Foods—or even just walk out of my apartment,” the 28-year-old says. In an ideal world, he’d wear sweatpants in public—if only that weren’t so frowned upon.

So Goldstein created his own sweatpants. To the naked eye, with their trendy cut and custom fitted length and waist, they looked just like regular pants. But they were wickedly comfortable. He went to the crowdfunding site Kickstarter looking to raise $15,000 and make a business out of it. Now he has a viable operation, the All Day Every Day pant from his company, Public Rec, retailing for US$95.

The ups and downs of fashion cycles have not typically affected sweatpants. Actress Eva Mendes told Vanity Fair in March that sweatpants were the “No. 1 cause of divorce in America.” The iconic fashion designer Karl Lagerfeld explained to Vogue in 2011 that “sweatpants are a sign of defeat.” But that may be changing. “At one point casual Fridays meant khakis. Now casual Friday definitely includes jeans,” says Sandy Silva, a fashion industry analyst with the market research firm NPD Group. So, yes, men wearing sweatpants at the office could not only soon be acceptable, but actually fashionable. In fact, Silva was wearing jogging pants with a blazer and high heels as she spoke with Maclean’s. 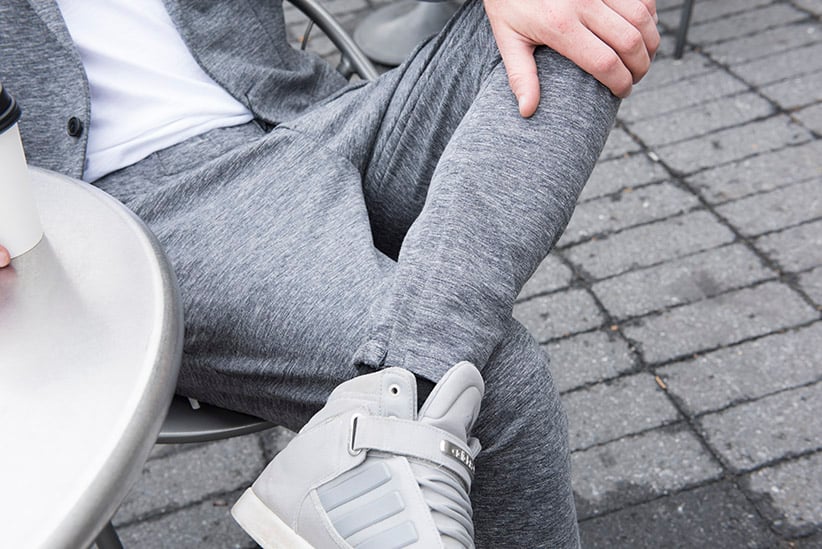 In the era of yoga pants, comfort rules. Between August 2014 and July 2015, sales in the men’s sweats division—which includes shirts, pants and shorts—skyrocketed to $619 million across Canada, an increase of 28 per cent from the prior year. “We haven’t seen a movement like this for any category since denim was gaining importance,” says Silva. The big buyers: male Millennials, aged 18 to 34.

One need look no further for validation than Kanye West wearing a stylish version around town. Of course, these are not the kind that cost two for $10 at the outlet mall, just as premium jeans can cost more than some dress pants. Calgary-based fashion designer Paul Hardy has a pair of sweatpants he says cost him at least $600. They look like a hybrid between dress pants and sweatpants; he wears them with a tuxedo jacket. “We’re not talking about Adidas here,” he says. “The ones I have are from a Parisian designer. There’s a drawstring on the inside of the waistband.”

Men’s sweatpants have popped up in runway collections from Todd Snyder and Jason Wu. GQ endorsed wearing them with a blazer, and recently promoted the “swuitpants” look for this fall—soft wool pants with a drawstring waistband. “There’s a little shock value at the onset,” Silva says. “Once more people start doing it, the guard comes down.”

When Canadian model Paul Mason thinks of sweatpants, he quickly recounts the episode of Seinfeld, when Jerry says: “You know the message you’re sending out to the world with these sweatpants? You’re telling the world, ‘I give up.’ ” These are pants with a different message.

At 51, Mason is a bit older—he’s been dubbed “Fashion Santa” because of his thick white beard. He prefers the dandy look, and doesn’t foresee himself walking out of the home in sweats—no matter how nice they are. But when he was asked to model a pair of high-end sweatpants from designer Phillippe Dubuc at Toronto Men’s Fashion Week, he kept them on for the after-party. “It was comfy as hell,” Mason remembers. “Sweatpants with a blazer can look cool—with the right kicks.”

As for Goldstein, his All Day Every Day sweatpants struck a serious chord online; his Kickstarter campaign raised a stunning $179,078. All of a sudden, he had a back order for several thousand pairs. He left his job for New York City, and now works a few blocks from the production line. Maybe now his mom can ask for her original pair back.