The legacy of Inuvik’s iconic ‘End of the Dempster’ sign 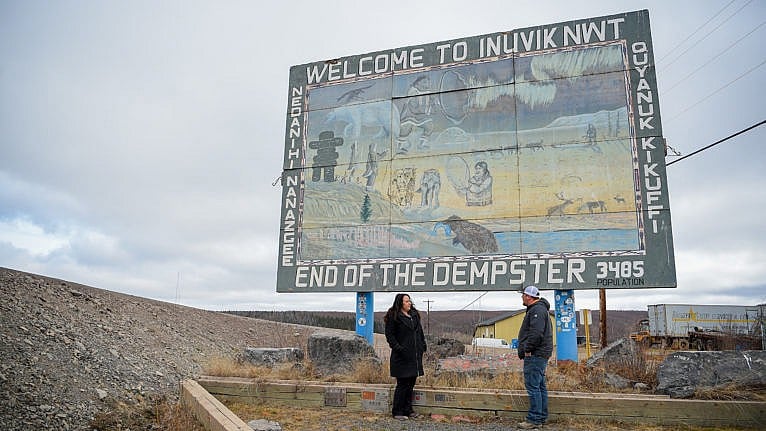 Kristine McLeod, deputy grand chief of Gwich’in Tribal Council, and Kelly McLeod, President of the Nihtat Gwich'in at the Inuvik sign they plan to restore (Photograph by Tony Devlin)

Kristine McLeod remembers driving past and watching as Inuvik, N.W.T.’s iconic “End of the Dempster” welcome sign was installed in 1992. Then just nine years old, she didn’t fully grasp its significance. But over the last 28 years, she says, “it’s taken on a whole different meaning for the community.” The hand-painted placard is splashed with elements of Gwich’in and Inuvialuit culture, as well as features of the northern landscape: drummers, dancers, the aurora, caribou, the terrain of the Beaufort Delta, as well as a delta braid, a geometric pattern traditionally used to adorn dresses and parkas. The sign displays welcome messages in both Gwich’in and Inuvialuktun.

After nearly three decades of welcoming visitors, the plywood landmark is falling apart and must come down, giving way to a modern fixture at the entrance of Inuvik. But the old one has sentimental value to the community, so its life will continue. In April, Inuvik town council put McLeod, now deputy grand chief of the Gwich’in Tribal Council, along with her brother, Kelly McLeod, president of the Nihtat Gwich’in Council, in charge of removing and restoring the old sign, then installing it in a new spot. While it may no longer be the first thing visitors to Inuvik will see, says Kristine, the nearly 30-year-old board will become a kind of artifact—“a piece of history that our children and our future generations can enjoy for years to come.”

The sign’s creator, Max Morin, was an RCMP officer who was stationed to Inuvik in 1991. His family arrived in town at 3 a.m. one summer day, with the sun still in the sky after their 12-hour drive on the famous Dempster Highway. The views had been breathtaking, he recalls, and he hadn’t needed any of the three spare tires he was told to bring on the journey from the highway’s origin near Dawson City, Yukon. As they neared Inuvik, he kept an eye out for a welcome sign, but it never came.

During his time in the town, Morin, a member of the Canoe Lake Cree First Nation in Saskatchewan, saw a drumming performance at the Inuvialuit Cultural Resource Centre. “When I heard that drumbeat, the music and the dancing they were doing, I had goosebumps,” he recalls. He was always artistic, and the performance inspired him to paint a sketch featuring the drummers, and the glimmering colours of the aurora borealis dancing to the beat in the sky. He took the painting to the town office and was given the green light to paint a 16-by-24-foot welcome sign. He used exterior wall paint from Home Hardware, laying on the colours in his off-hours while his one-year-old son sat on the dry parts. He wanted to capture the community’s culture, producing a landmark that declared, as he puts it, “this is what Inuvik is, what the land is. The singing. The northern lights. The animals that live up there.”

The Dempster Highway itself has historical connections to the Gwich’in. Oral history collected by the tribal council shows that Joe Henry, the man who first led surveyors to map the beginnings of the Dempster in the Yukon, identified as Tukudh Gwich’in. Those links live on, not only because the roadway runs through Gwich’in and Vuntut Gwich’in settlement areas, but because “a lot of our Gwich’in businesses maintain the highway to date,” says Kelly McLeod.

For anyone visiting or returning to Inuvik, passing those words, “End of the Dempster,” meant crossing the finish line of a 737-km odyssey—a gravel ribbon crossing giant rivers, two mountain ranges and, of course, the Arctic Circle. “That sign really signifies that you made it and you’ve made it home,” says Kristine. Its proposed new location on the other side of the townsite is what some consider the real end of the Dempster, where the recently completed Inuvik-Tuktoyaktuk Highway begins, leading to the Arctic Ocean.

The sign is expected to be reinstalled by the end of the summer, with the community’s youth helping to fix the plywood panels that have warped in the sun and cold, repainting some sections to make the faded colours pop—all under the direction of Gwich’in artists. 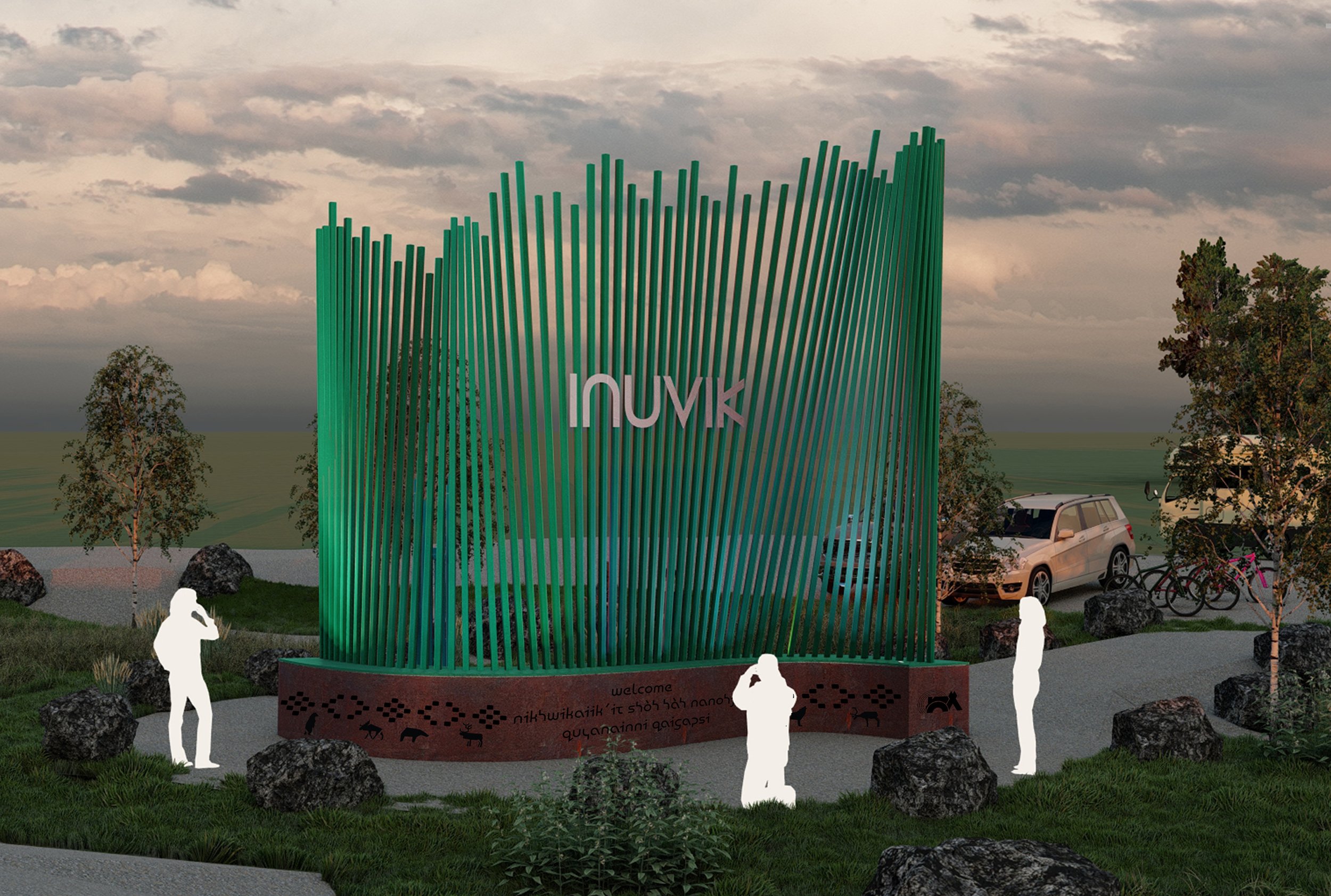 A rendering of the new Inuvik sign (Courtesy of Fathom Studios)

Back on the other side of town, a new fixture will go up about 350 metres and around a corner from where the original stood. Designed by Fathom Studio in Nova Scotia, it features a striking sculpture of metal rods arranged in a ribbon formation to mimic the Mackenzie River and the aurora borealis, serving as art, welcome sign and public infrastructure (its base provides a built-in seating area). It was the target of some criticism when renderings were unveiled: some thought the project should have gone to local artists, though there were invitations for public input before the tender was awarded, and Fathom consulted community Elders and town staff. But the new sign will feature many of the same elements as the old one—caribou, a polar bear, words in three languages and the delta braid inscribed in the base. And when both projects are complete, the town will lie between symbols of the present and the past. As Kristine observes with a laugh: “There’s nothing wrong with having two signs.”

This article appears in print in the July 2021 issue of Maclean’s magazine with the headline, “Signs of their times.” Subscribe to the monthly print magazine here.