The lights of the living 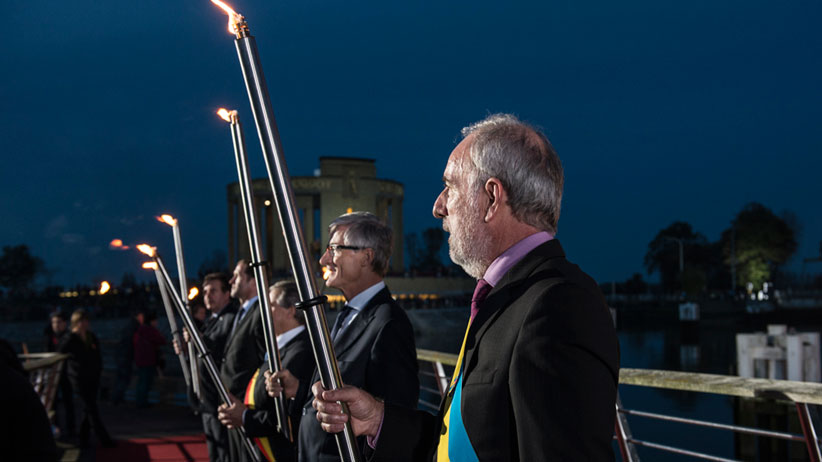 There is a moment in Pat Barker’s First World War novel, Regeneration, in which the poet Siegfried Sassoon, detained in a mental hospital for shell shock, describes a vision of the Western Front to his fellow patient, the young Wilfred Owen. “I was going up with the rations one night and I saw the limbers against the skyline, and the flares going up,” he says. “Only I seemed to be seeing it from the future. A hundred years from now, they’ll still be ploughing up skulls. And I seemed to be in that time and looking back. I think I saw our ghosts.”

The spectres of Sassoon and Owen were certainly palpable earlier this month when, on Oct. 17, nearly 10,000 torchbearers stood for an hour in complete silence along Belgium’s Western Front as part of a ceremony called the Light Front. From the town of Nieuwpoort, along the bank of the Yser river, through the hills of Ypres and Heuvelland to Mesen and Ploegsteert, thousands of people from Europe and North America came out to remember the cataclysm of human loss that began and ended on this stretch of land a century earlier.

They do still plough up skulls here, and, far more often, unexploded artillery shells. In harvest season, they are so common, Flemish farmers place them by the side of the road for collection and destruction by the military police. In an era of drone attacks and when Western politicians must justify each and every domestic casualty of overseas military action to a skeptical public, it is difficult to comprehend the courage and barbarity of trench warfare in the First World War. Between 1914 and 1918, a conflict of almost complete intractability raged on along this front. Major offensives by the Allied forces were held off by the German’s combination of machine-gun nests, barbed wire and artillery fire.

The casualties defied sense or strategy: an estimated 700,000 dead in Verdun. More than a million in the Battle of the Somme. And, at Passchendaele, 600,000 lives were sacrificed, all for a few metres of mud. Despite all this slaughter, there were no significant advances until the very end, when the American reinforcements arrived. History has not looked favourably upon the generals who ordered a generation of men to their deaths. And yet, we won.

But, a century on, do the means justify the end? The question looms over all modern warfare, and the debate began because of what happened here, on the Western Front of Belgium and France. It is astonishing to visit the First World War cemeteries around Flanders—cemeteries where the names of Canadian soldiers are inscribed, along with countless Australians, New Zealanders, Belgians, French and British—and to see the almost infinitely repeated inscription “a soldier of the Great War.”

Kris Peeters, the minister-president of Flanders who leads Belgium’s fractious coalition government, made his rounds of the assembled international press corps camped out at the war monument in Nieuwpoort prior to the Light Front ceremony last month. “It’s the commemoration of a very powerful and dark moment in history,” he said in an interview, “and it’s an important moment for Belgium and Flanders, in particular. We have been working on this ceremony for months now, and are honoured to give the world a chance to pause and reflect on what happened.”

An hour or so later, Peeters took his place at the beginning of a line of torches stretching hundreds of kilometres across Belgium, from the North Sea to the town of Comines-Warneton. The king and queen of Belgium took their place at one of the country’s many war cemeteries along the way.

In Nieuwpoort, the ceremony was modest —even sombre. It was here, at the Goose Foot lock complex, where the Belgian army opened the floodgates that caused the German military to come to a halt at the end of October 1914. The estuary that lay between both fighting parties became no man’s water until the end of the war.

For the Light Front ceremony, thousands of people gathered at the head of the Yser river. The band played and there were some low-key military fireworks. As the sun set, the torches were raised. Just as it was 100 years ago, the endless darkness was illuminated by thousands of flickering flames: a chain of tiny lights stretching out into the fields, denoting a massive human presence. The crowds of the living far outnumbered by the dead.