The longest punt in football history has a math problem

Thomas Pinckard insists he booted a football a record-setting 114 yards during a game in 1966—and has the affidavits to prove it. But the evidence doesn't add up. 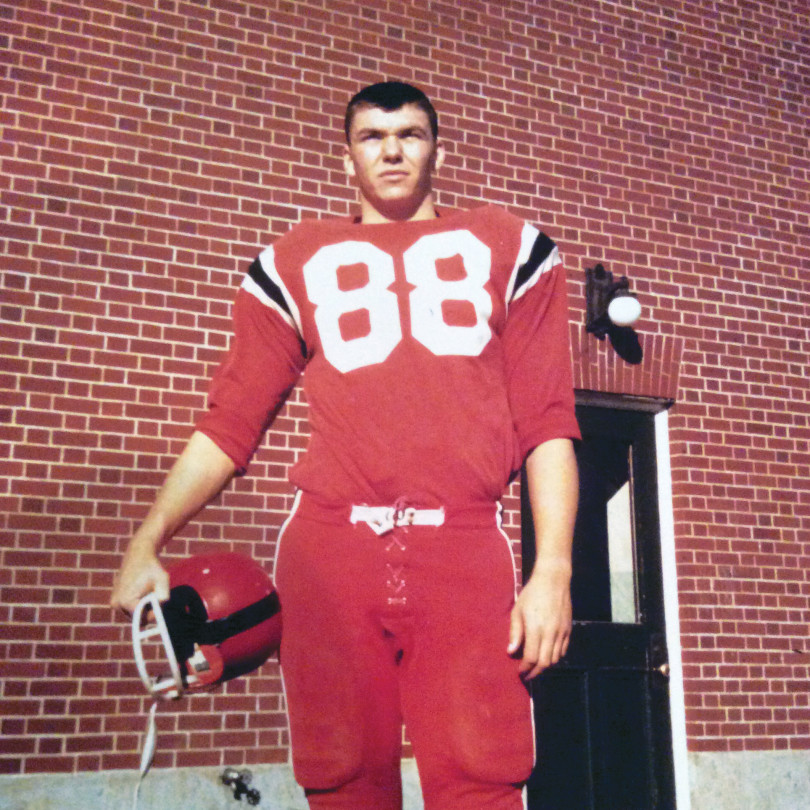 There was a fence around the University of New Brunswick’s College Field back in 1966. Thomas Pinckard is sure of it. If there hadn’t been, he says, the football he punted 114 yards during a UNB Red Bombers game that year would have kept rolling until it ended up in the St. John River.

The hyperbole is born of conﬁdence in his record boot. For decades, the “Pinckard Punt,” as it has been dubbed, wasn’t recognized in the history books. It was initially recorded in the game’s stat sheet as an 89-yard punt, Pinckard says, because statisticians in Atlantic Canada then recorded punt distance up until the ball reached the goal line. Nowadays, if the ball enters the end zone, punters are credited with the extra yards it travels.

It took years of prodding from friends and former teammates before Pinckard emailed U Sports, the governing body of university sport in Canada, to tell them in 2017 about an achievement history had overlooked. “The focus was to get one UNB Red Bombers record back in the books—for the sake of all the guys that used to play on that team,” Pinckard says, noting that his alma mater had dropped its varsity football program amid budget cuts in 1980. “This was a long punt on its own, but it had one of those quirky bounces when it lands on the point. We called it the ‘sweet spot.’ This one hit the sweet spot and must have hit the sweet spot again.”

READ MORE: How Donald Trump’s past with pro football revealed his true self

If conﬁrmed, a 114-yard punt would go down not only as a Canadian university record—besting the current one of 101 yards, set in 2014—but also, by extension, the longest punt in the history of football, professional or collegiate, anywhere in the world.

Yet pursuit of that conﬁrmation has evolved into a complex quest requiring archival video footage, ﬁeld blueprints, newspaper records and afﬁdavits provided by players and ofﬁcials more than ﬁve decades after the game was played. While U Sports concluded in September the evidence was sufﬁcient to list the “Pinckard Punt” as the new record, further probing by Maclean’s has unearthed what is surely one of the weirdest games in the sport’s history, in which a future Liberal MP was stopped from scoring a touchdown by an opponent who ran, sans helmet, off the bench to tackle him and, at a key moment, one coach evidently forgot the rules. As for the “Pinckard Punt,” a deeper dive into archival newspaper reports casts serious doubt on claims the ball rolled out the back of the end zone for 114 yards, as the record book states.

The task of looking into the available evidence fell to Alan Hudes, coordinator of communications with U Sports, who immediately turned to UNB’s student paper, the Brunswickan. And sure enough, a game story for UNB’s 9-7 win over the Saints of Saint Dunstan’s University (later the University of Prince Edward Island) on Sept. 24, 1966, referenced Pinckard’s punt as key to victory.

RELATED: After a suicide attempt, football became Jeremy Pearce’s ticket out of a dead-end life

But Hudes still had no proof that it went through the end zone, or that the end zones of College Field were 25 yards deep, as Pinckard claimed. (A standard Canadian football end zone runs 20 yards.) UNB staff were able to dig up old ﬁeld blueprints conﬁrming Pinckard’s claim of the longer end zones. Then, in an apparent breakthrough, UNB’s library staff unearthed a 10-minute clip of that game’s highlights in the recently digitized video archives. In the very last seconds of the video, the Red Bombers can be seen lining up to punt from their own 21-yard line—exactly 114 yards from the back of the opponent’s end zone. The ball is visible flying off Pinckard’s foot, sailing over the heads of the two Saint Dunstan’s returners.

Alas, just as the ball hits the ground, the ﬁlm begins cutting in and out, then goes white before the ball comes to rest. Andy Campbell, the communications manager for UNB Athletics, was among the ﬁrst to watch it. “I’m yelling ‘No! We’ve gotten this far!’ That would have been deﬁnitive proof.”

In the absence of such proof, Hudes proposed that Pinckard, now 75, gather multiple afﬁdavits from people who saw his punt roll through the end zone. It took some time—“Two of my former coaches are deceased and so is the trainer,” says Pinckard—but he managed to ﬁnd the ofﬁcial timekeeper, Mark Jewitt, now a lawyer in Ottawa, who swore he saw the ball travel “through the back of the end zone.”

Other afﬁdavits came from Pinckard’s Red Bomber teammates Dan Palov, Bruce Tetreault and team captain Clifford Moore. Palov recalls the punt, his own game-winning touchdown and a match that repeatedly veered into the bizarre—not least when Tetreault left the bench without a helmet to tackle a Saint who was running for the UNB end zone. “There’s a lot of games I have no recollection of, but this game I remember because of those three things,” Palov says. 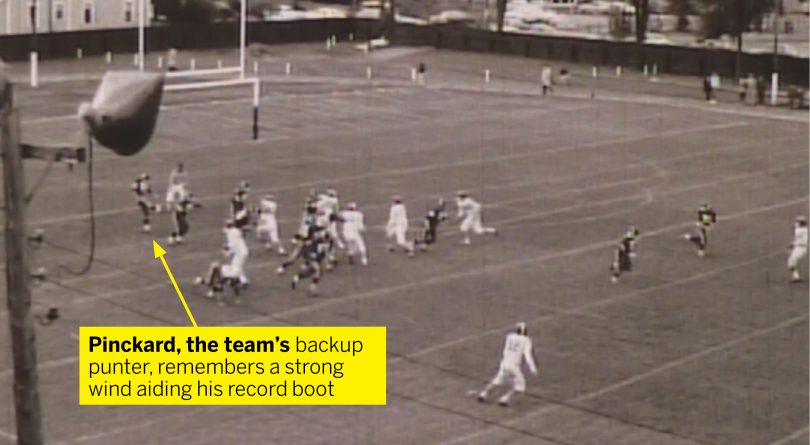 For Hudes, the afﬁdavits closed the case: 89 + 25 = a 114-yard punt. “As soon as he sent them to us, we told him we’d update the record books,” he says. But the newspaper reports raised another math problem—one that calls these accounts of the “Pinckard Punt” into question.

Two other newspapers, it turns out, had reporters at the game. And while each of the three game stories conﬁrms a long punt, none—not even the Brunswickan—mentions the ball rolling to a fence or even out of the end zone. Instead, they report that the Red Bombers’ defence scored a safety several plays later, giving UNB two points—as the Saints’ coach incorrectly thought a safety would result in his team receiving a punt. 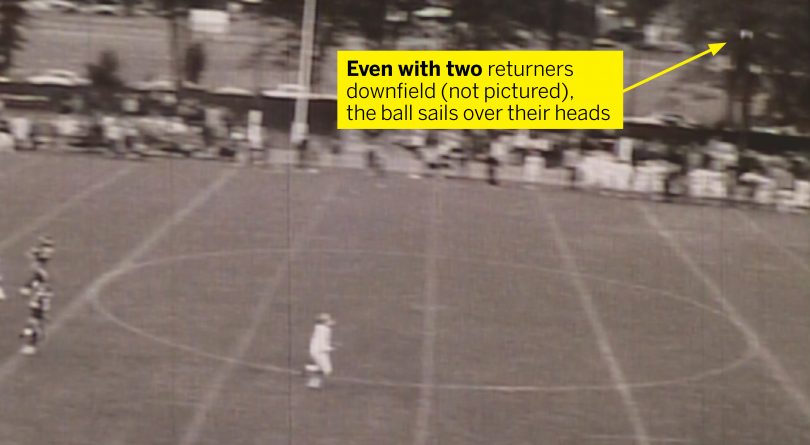 Then, in a frantic ﬁnal drive, Palov caught a touchdown pass for the Red Bombers, putting UNB ahead 8-7. The Brunswickan reported that UNB’s helmetless hero, Tetreault—who had somehow escaped ejection for his earlier transgression—kicked the convert for the extra point. Final score: 9-7.

The problem is this: if the Red Bombers indeed had a punt roll through the end zone, it would have earned them an additional single point, known in Canadian football as a “rouge.” But there’s no point recorded for the punt in any of the news reports. And every other point in the 9-7 score is accounted for. “The math doesn’t add up,” says John Keefe, director of sport for Atlantic University Sport, the association that oversees university sport in the region. “It’s hard to disagree that the newspaper description doesn’t jive with the punt that went through the end zone.”

Maclean’s contacted multiple team members who played for the Saints that day, several of whom shared vivid memories of the game, but none could remember a UNB punt going through the end zone. Not even Joe McGuire, a former long-time Liberal MP, who happens to be the player Tetreault tackled after running off the bench. He remembers that game, he says, “like it was yesterday.”

U Sports has various hypotheses to explain the absence of Pinckard’s point from news accounts: maybe there was a penalty on the punting play that negated the single point. Perhaps the journalists all got the score wrong. “As long as we had sworn documents from his teammates [stating the punt went through the end zone], for us that was good enough,” Hudes says. “How else can we verify? We’ve done all the homework we can.”

Pinckard also is conﬁdent his punt went through the end zone, no matter what the math says. He even remembers the reaction from his teammates as he went to the sidelines after his record punt. “Virtually none,” he says. “It was a great kick. But a punt is just not a highlight of a game.”

This article appears in print in the December 2019 issue of Maclean’s magazine with the headline, “The 53-year punt return.” Subscribe to the monthly print magazine here.